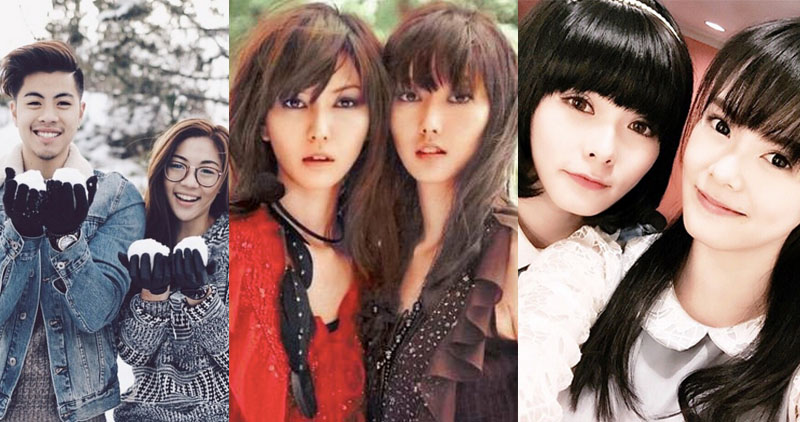 Let’s face it – nobody is immune from a little bit of sibling rivalry. You may share the same last name, but that’s about it. For some, they may be living in the shadow of their “more outstanding” sibling, and have to put up with constant comparisons.

For example, Alan Einstein must have been pretty jealous of his little brother Albert.

But there are also siblings who are equally capable.

These 12 siblings show us that one can succeed in any trade and be known as an individual, not just so-and-so’s sister/ brother: 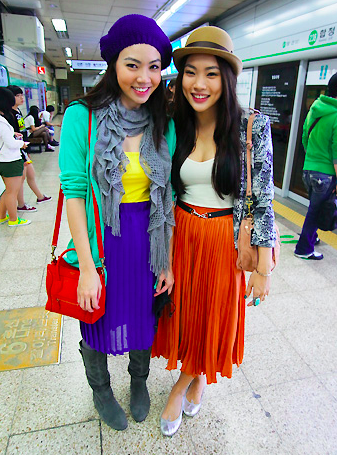 In 2005, sisters Viola, Velda, and their childhood friend Rachel Lim, started a blogshop named Bonito Chico on online social networking platform LiveJournal to sell their clothes for extra cash. As a pioneer in the fashion blogshop world, their revenues surged in no time.

In 2010, they felt the need for expansion and proceeded to acquire a domain name, renaming the brand Love, Bonito.

Today, Love Bonito has 40 employees. Its annual revenue continues growing by about 25 per cent a year.

Velda is no longer in charge of Love Bonito’s day-to-day-operations. In 2015, Velda has launched her own womenswear line, Collate The Label, debuting its Pre-Fall 2015 collection at her first runway show during Singapore Fashion Week.

The brand was described as an “affordable luxury clothing line” and is targeted at women who appreciate clean and feminine silhouettes.

By now, homegrown ladies footwear and accessories label Charles & Keith would no doubt be a familiar name to every Singaporean. But you probably didn’t know the brand was founded by brothers 41-year-old Charles and 39-year-old Keith.

As kids, the brothers learnt how to run a shoe business by helping their parents at their shoe store.

In 1996, 22-year-old Charles opened his first shoe store at Amara Hotel. Younger brother Keith joined in the business two years later. By late 1997, they started to design their own shoes to cater more variety to customers in order to have an edge over their competitors. This move proved successful and the duo expanded into major shopping centres and suburban malls.

In 2001, they ventured into Philippines and had 33 stores there by 2013. In 2004, they debuted in the Middle East with a store in Dubai, and another in Saudi Arabia the next year. In 2011, LVMH (Louis Vuitton Moet Hennessy) group invested in a 20 percent stake in Charles & Keith for over $30 million. 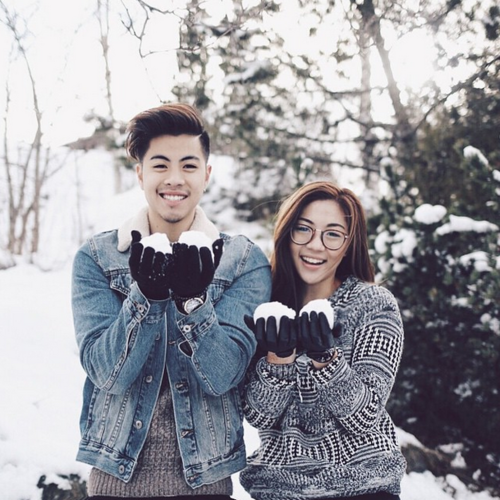 Their late mother played the piano, while their father plays the guitar. Besides sharing a passion for music, the pair was also former national youth swimmers and alumni of the Singapore Sports School.

In 2012, the siblings burst into the industry with their indie band, The Sam Willows, which found fame after their YouTube videos with original songs and covers garnered a significant following. The band is made up of the brother and sister duo, along with their two other friends, vocalist keyboardist Sandra Tang and guitarist Jonathan Chua. That year, they also released their debut self-titled EP.

Barely a year after The Sam Willows was formed, they secured a distribution deal with Warner Music Singapore and made their international debut a year later at the South by Southwest Music Festival in Texas.

In January 2015, the band signed with Sony Music Singapore.

Sani Hussin: Sani is a television and stage veteran actor with 21 years of experience, best recognised for his role as a national service boy in army drama Soldadu in 1998. Following his Pesta Perdana Best New Actor award, he garnered a significant number of fans.

Sani has directed plays too – in 2006, he directed the play Pintu (which means “door” in Malay).

Rosita Hussin: Living in her brother’s shadow, Rosita was always known as Sani’s sister, which annoyed her as she wanted to be known by her own name. She was an air stewardess for eight years before she joined MediaCorp Suria in 2004, but she was no stranger to the industry.

At the age of 15, she started acting and appeared in several plays.

In 2011, people started seeing her as an individual after she won the Best Supporting Actress award at Pesta Perdana.

The 23-year-old twins started out as bloggers, which helped them amass a significant following on social media. In 2011, the sisters took part in The New Paper New Face, a modelling competition. While Hayley did not make it past round 2, Jayley made it to the finals, but fell short of winning the title.

She also forayed into hosting on lifestyle programme Style: Check-In and starred in two local movies, The Girl in Pinafore with Hayley, and Inside the Urn. More recently, she could be seen in Channel 8 drama Super Senior. 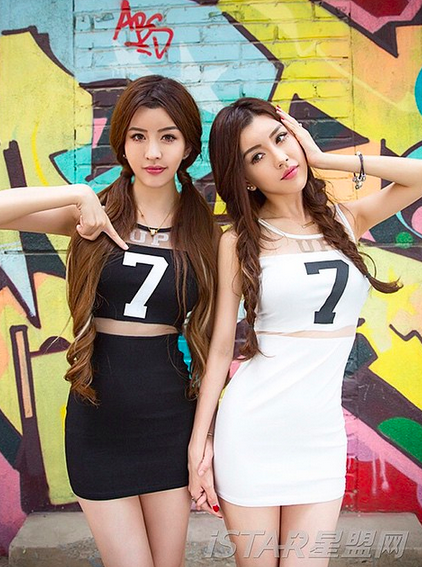 The twins have been exposed to performing arts from a young age and learnt piano, violin, ballet, and other dancing styles.

Their passion for performing grew in their teenage years and they both enrolled in Ocean Butterflies’ Music Forest’s V Singer training course when they were 13. Their talents were discovered by Ocean Butterflies Music’s Billy Koh, who gave them a 10-year record deal.

In 2008, they debuted with their album NC 16. In 2010, they released their third album, Grown Up, which topped Taiwan’s music chart and several music charts in China.

7. Teh May Wan and Teh Choy Wan 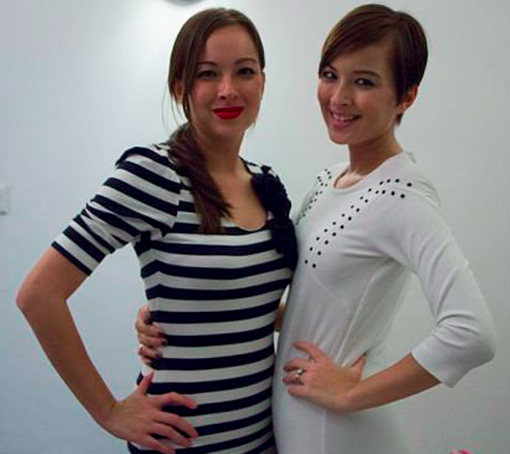 Former MTV VJs Teh May Wan and Teh Choy Wan may be twins, but one twin was more popular than the other in their early 20s. May Wan would usually get more jobs in their modelling days, since she was the thinner of the two.

Things improved when the siblings clinched a joint hosting gig on channel MTV, where they interviewed music acts like Backstreet Boys for their segment, Double Trouble.

In 2007, they made their movie debut as the Durian Sisters in Royston Tan’s 881.

The twins now do more individual hosting gigs but are still close to each other and meet three or four times a week.

The sisters were born Lee Huei Tjin and Lee Huei Min, the second and youngest of four children respectively, to a doctor father and remisier mother who now runs a volin school. While Tjin’s forte was in the English language and writing, Min excelled musically. It comes as no surprise that the sisters have taken on vastly different career paths.

Tjin Lee: The founder and CEO of Mercury Marketing & Communications has come a long way since her public relations and marketing days at Club 21.

Today, Mercury makes an annual revenue of more than $13 million and is located at a 4,000 sq ft office in Telok Ayer.

She is also the founder and Festival Director of the successful Audi Fashion Festival, which has showcased collections such as Victoria Beckham and Diane von Furstenberg.

Min Lee: Min, on the other hand, is a renowned classical violinist, who started playing the violin at two years old. When she was 14, Yale University accepted her to the Masters program.

Together with Royal Philharmonic Orchestra, she recorded an album titled Debut. In 2011, she became Finnair’s brand ambassador in Singapore.

She is now the Program Director of the Wolfgang Violin Studio.

The sisters may be six years apart, but their uncanny resemblance has caused pop stars like Sammi Cheng and Jay Chou to mistake the younger Sng for Stefanie Sun.

Stefanie Sun: The Taiwanese-based singer-songwriter’s talent was first discovered by her music teacher Lee Wei Song. She released her first album in 2000, the self-titled Yan Zi, which sold more than 560,000 copies in Taiwan and 3.8 million copies in Asia, a formidable feat to a newcomer.

Sun is now undoubtedly one of Singapore’s most successful singer, with over 10 million sold copies within Asia and 11 albums to her name.

Jeanette Sng: Sun’s younger sister, born Sng Ee Mei, studied medicine at National University of Singapore. She has never thought of following her sister’s footsteps in being a celebrity, and is now a surgeon.

Julian Hee: The former model made his television debut on Channel 5 Heartlanders, and switched to Channel 8, earning nominations for Best Newcomer and Top 10 Most Popular Male Artistes for the Star Awards the following year. In 2009, he left MediaCorp to focus on his business ventures, but still accepted freelance acting jobs.

More recently, he could be seen on the silver screens starring alongside Malaysian actress Yeo Yann Yann in local sex comedy Rubbers. Hee is now busy with his F&B business plans and is thinking of setting up a traditional French food eatery with his brother. He is also busy travelling – he could be snowboarding in France, or kitesurfing in Aceh, Mauritius and Phuket right now.

Haden Hee: When he was 15, Hee was an all-night cashier at a petrol kiosk. But he has come a long way since. Earning his due through property, the entrepreneur set up Haden Development Centre in 2004, which offers badminton classes for students and adults. He also owns food businesses Kimchi Korean Restaurant and Guksu Restaurant.

If the younger Hee looks familiar to you, you might have seen him in supporting roles in Chinese drama serials Your Hand In Mine and The Dream Makers.

Twin brothers Daniel Yun and Woon Tai Ho are both in the media industry.

Daniel Yun: Prior to entering the broadcasting and movie industry, Yun had extensive experience in marketing and advertising.

In 1991, Yun joined Singapore Broadcasting Corporation Radio as Vice-President of radio sales and became Head of Programming the next year. In 1998, he became TCS’ Vice-President of Production 5 and founded MediaCorp Raintree Pictures the same year.

In 2014, he founded Blue3 Pictures to develop regional features and documentaries.

SG50 celebratory movie, 1965, was produced and co-directed by him.

Woon Tai Ho: Woon worked as a producer in Singapore Broadcasting Corporation and Television Corporation of Singapore before founding Channel NewsAsia in 1999. From 2004 to 2009, he was the CEO of MediaCorp TV 12, MediaCorp News’ managing director.

He left MediaCorp in 2009, founding media consultancy Green Orange in the same year.

Lee Hsien Loong: Mr. Lee Kuan Yew‘s eldest child is the third and current Prime Minister of Singapore. He joined the Singapore Armed Forces in 1971, and quickly rose to become the force’s youngest brigadier-general aged 31 in 1983.

He also recently gave Singapore’s 50th National Day Rally all by himself.

Lee Hsien Yang: The second son of the late LKY was SingTel’s Chief Executive Officer from 1995 to 2007 and Fraser and Neave’s Non-Executive Director and Chairman from 2007 – 2013. He is currently the Chairman of Civil Aviation Authority of Singapore (CAAS).

All in the family

Looks like success tends to run in the family; while some siblings have chosen the same industry, others have ventured into different fields – like singer Stefanie Sun and her surgeon sister, embodying the age-old debate of nature versus nurture.

Whatever it is, these siblings will surely continue to intrigue us.