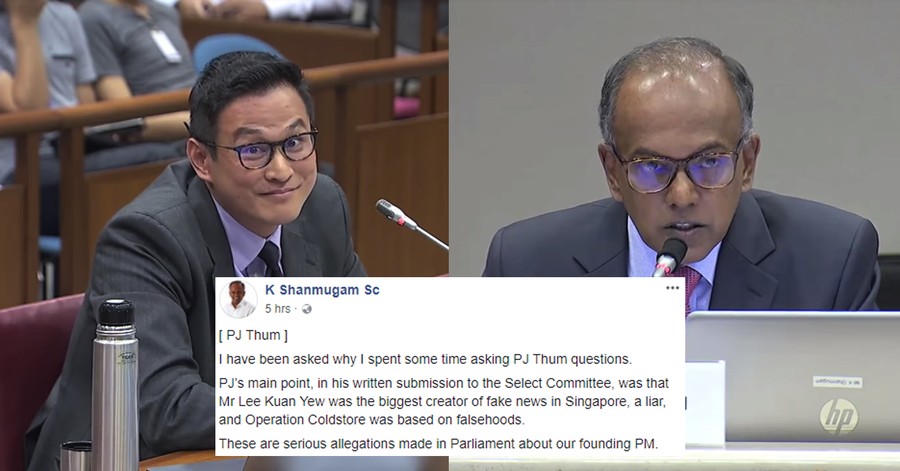 Just like that, the Select Committee on deliberate online falsehoods ended their 8 day-long series of public hearings. We had already heard from journalists and representatives from Facebook, Google, and Twitter and even saw Han Hui Hui physically carried out of parliament — and the hearings ended last Thurs (29 Mar) with Home Affairs and Law Minister K Shanmugam spending 6 hours grilling historian Dr Thum Ping Tjin over Operation Coldstore and the communist conspiracy.

The crux of the argument was Dr Thum’s assertion that fake news didn’t have big enough impact on Singapore in the offline context. The only exceptions was the PAP themselves, who used the Internal Security Act to detain political opponents on the suspicion of communist activities. We had previously talked about Dr Thum’s allegations here.

Depending on who you ask, Minister Shanmugam’s 6-hour questioning of Dr Thum was either an exercise in establishing facts, or an utter waste of time.

Here’s the post in case you can’t see it.

Keeping quiet not an option

In the post, Minister Shanmugam addresses Dr Thum’s allegations – or PJ, as he’s referred to here – saying that they suggested that “Mr Lee Kuan Yew was the biggest creator of fake news in Singapore”, and that Operation Coldstore was executed with falsehoods — all serious allegations about the founding Prime Minister.

Therefore, these allegations had to be proven untrue, as a lack of action would suggest that Dr Thum’s version of events would be accepted as fact.

Minister Shanmugam pointed out that Dr Thum had refused to answer many of his questions, and later admitted certain lapses in his research, including failing to read certain documents and statements that proved the existence of a communist threat in Singapore.

The Home Affairs and Law Minister ends off by saying that he deals with faces, and will “say it as [he] thinks it is”.

He also makes an allusion to local cartoonist Sonny Liew, and ends off with a very polite “He is a talent”.

Of course, Dr Thum thinks otherwise about his exchange.

Dr Thum wondered the point of Minister Shanmugam’s grilling of his academic work at a Select Committee hearing of Deliberate Online Falsehoods, and claimed that his argument “easily withstood six hours of assault”.

He also suggested that the interrogation would “intimidate and instil fear” to anyone who chose to disagree with the government’s official narrative, thus “suppress(ing) academic freedom and inquiry in Singapore”.

Dr Thum then expressed this disappointment that Minister Shanmugam opted to insult him, instead of having an open debate.

Clearly, Dr Thum’s feelings on his hearing can be best described with this expression he made at his hearing.

Of course, it goes without saying that the entire hearing was quite the hoot to experience. If you have 6 hours to spare, the GovSingapore YouTube account has uploaded the exchange, splitting it into 4 parts. Part 1 can be found here.

But if you’re rushed for time, here’s an abridged version, spliced by filmmaker Martyn See.

Of course, we run the risk of Mr See choosing to pick and choose parts of the exchange, which means this video might be biased after all.

Nonetheless, this exchange seems to be only heating up, and looks like the two will be crossing swords again the future.