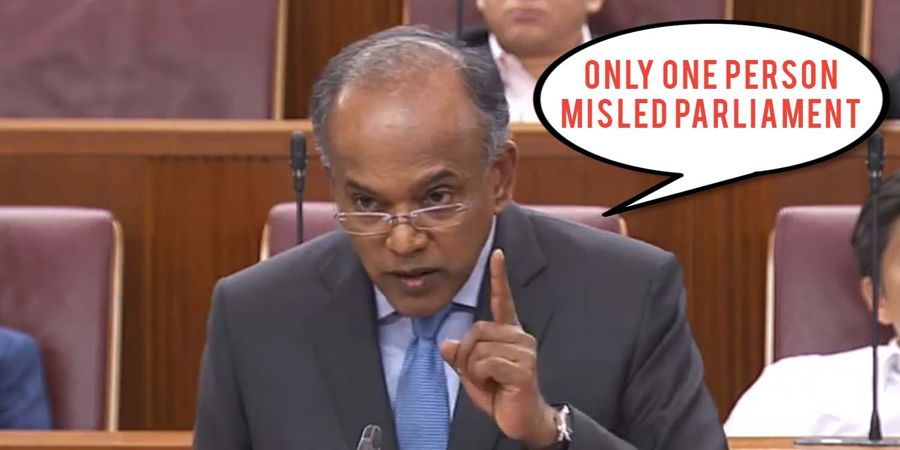 Sylvia Lim Asks If Parliament Was Misled On Elected Presidency, K Shanmugam Says She Knows All About Misleading

It seems like third time’s the charm for Workers’ Party (WP) Chairperson Sylvia Lim, after her motion to discuss the Reserved Presidential Election was finally heard in Parliament on 3 Oct. It was not easy for her to get a chance to raise the issue in Parliament, having failed to win the random ballot twice.

However, before Ms Lim could even break into a smile at the minor victory, Minister for Law K Shanmugam duly wiped the grin off her face with a smackdown for the ages. Here’s what happened.

The WP Chairman sought to clarify whether the Government’s decision to count from President Wee Kim Wee instead of President Ong Teng Cheong was due to legal reasons or a policy decision.

After all, in November 2016, PM Lee said that the reserved presidency amendment would come into effect, after advice from the Attorney-General.

In her Parliamentary speech, Ms Lim questioned if Prime Minister Lee Hsien Loong, Deputy Prime Minister Teo Chee Hean, and Minster in the Prime Minister’s Office Chan Chun Seng had misled the house into thinking that the decision to count from President Wee Kim Wee was a legal one.

Instead of getting a reply from any of the aforementioned ministers, the former lawyer was rebutted by a fellow member of the bar, Law Minister K Shanmugam.

This meant that “the Government [could] decide” when it wanted begin the count from. He added that Ms Lim would have known this if she had read the judgement passed by the Courts during Tan Cheng Bock’s appeal.

Having schooled Ms Lim in the Parliamentary debate, Mr K Shanmugam took the chance to aim a thinly veiled jibe at the opposition party member.

Using Ms Lim’s initial accusation that the house was misled into avoiding the debate, Mr K Shanmugam turned the tables on her.

This clearly left a bitter in Ms Lim’s mouth. Just take a look at her reaction. Now, you might be wondering who this “he” is and why Ms Lim looked as if she wanted to murder someone. Well, that is because the person Mr K Shanmugam was referring to is probably her.

Their spat stems from the Aljunied-Houngang-Punggol East Town Council saga where the WP was accused of a mismanagement of funds.

During a press conference in 2015, the Law Minister issued a public reminder to Ms Lim the High Court had said that she “misled Parliament, [and] was dishonest” .

So when Mr Shanmugam yesterday refused to reveal who the identity of the politician who misled Parliament was, we could not help but see the similarities with comedian Russell Peters’ well known joke, “somebody gonna get hurt real bad“.

Well, after this parliamentary debate, it seems like that person is Ms Sylvia Lim.