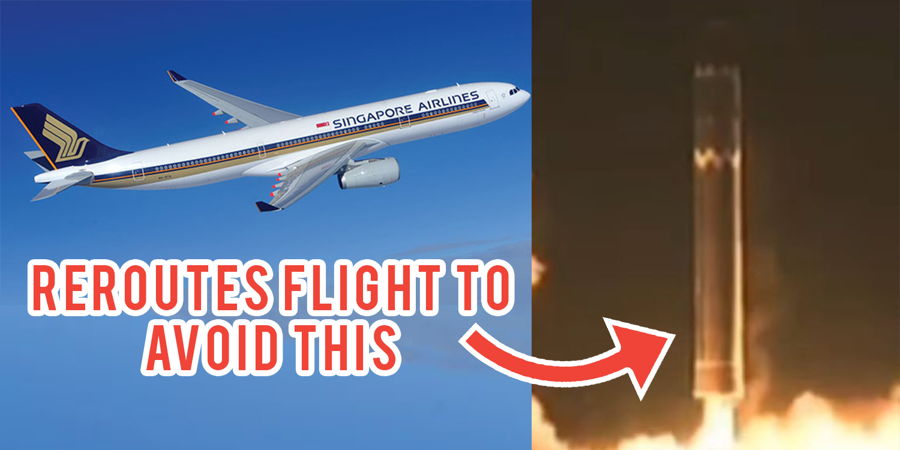 If you haven’t been following the international news recently, you’re missing out on some potentially explosive news.

On 29 Nov, North Korea launched what seems to be its biggest intercontinental ballistic missile, the Hwasong-15. The successful testing of the Hwasong-15 has caused concern for many world leaders, including Singapore.

However, if you are picturing PM Lee sitting in a room with our military generals, that’s not quite the kind of action we are referring to.

We are instead referring to our national airline, Singapore Airlines (SIA).

SIA la, what are you talking about?

If you are wondering what SIA has got to do with North Korea’s huge missiles, well it is all about airspace.

North Korea’s missile test on 29 Nov was probably intended to send a message to world leaders that the country now has the potentially ability to launch a nuclear strike on anyone in the world. World leaders watched closely as the Hwasong-15 missile recorded the longest distance ever traveled by a North Korean missile, clocking approximately 4,475 kilometers and spending 53 minutes in the sky using a standard trajectory.

However, another group of people were paying even more attention than the world’s leaders. These were the passengers of Cathay Pacific flight CX893.

Passengers on board the flight from San Francisco to Hong Kong claimed that they saw the “re-entry of a North Korean missile into the Earth’s atmosphere”.

Although the crew of the Cathay Pacific flight were close enough to see the “missile blow up and fall apart”, a spokesperson from the Hong Kong based airlines reported that “at the moment, no one is changing any routes or operating parameters”.

This seems to be the same tune that other airlines such as Korean Air are taking.

Luckily, Singaporeans will have a smaller chance of ever encountering such an event. Turns out, SIA had already rerouted its Incheon-Los Angeles flight path after an earlier missile test by North Korea on 27 July.

A spokesperson from SIA told Channel NewsAsia that their “flight routings do not transverse in the vicinity of the missile trajectory as [they] have taken earlier steps to avoid the northern part of the Sea of Japan”.

With the safety of passengers and crew the utmost priority for the airlines, it is probably a good time to be proud that we are Singaporeans.