Following the incident of two MRT trains colliding at Joo Koon MRT station, questions raised by the public skyrocketed regarding the safety and reliability of the signalling system that SMRT claims to be “improving”.

This may be a surprise to some, but the SMRT resignalling project was actually introduced in July 1997 by then SMRT managing director, Kwek Siew Jin.

The upgrading works on the North-South (NSL) and East-West Lines (EWL) that was projected to cost $100 million, were to be completed by 2002.

Clearly, the deadline wasn’t met as 15 years down the road, the MRT is still fraught with a never ending list of problems that are largely due to signalling issues.

As suggested by this Straits Times Article, perhaps if SMRT did stay true to it’s original timeline, we wouldn’t be facing such a big issue with the train system.

If SMRT had stuck to the original timeline for resignalling, many of the problems and challenges our rail network faces today would be far less severe.

So, what could possibly be the reasons behind such an extensive delay?

Did SMRT run out of revenue to fund upgrade?

For two years before 2002, SMRT’s revenue surpassed the $100 million needed to complete the resignalling project, but there weren’t any official statements in the ARs regarding expenditure for any improvement work.

Expenditure was instead focused on other expansionary investments.

As Singapore was in its stages of further integrating its transport system during the period of 2001 – 2003, SMRT became heavily involved in many other projects in regards to this.

For example, much of reason behind the significant loss of profits between 2002 and 2003 was due to SMRT having to bear the cost of merger with then bus service provider, Trans Island Bus Services or better known as TIBS.

Also, SMRT would have been busy preparing the opening of the Expo and Changi Airport Stations as well as establishing the EZ-Link infrastructure.

Considering how the resources were streamed into other projects, SMRT’s priorities are clearly away from their initial announcement to improving the signalling system.

Throughout the same period, SMRT has seen many positions in management being shift around.

This is inclusive of Mr Kwek.

After being President of the Board of Directors of SMRT in 2001, Mr Kwek subsequently left a year later.

Consequences of a change in heads of management would also mean a paradigm shift of interest, policy and focus of the entire organisation.

Thus this provides another reason why SMRT had a change in priorities away from replacing the old signalling system.

With all the changes in focus on what to develop next, it can be said that SMRT doesn’t really have a clear foresight of the future.

A possible explanation why SMRT steered away from their initial plan of upgrading the EWL and NSL, is because of their confidence with the current system during the period mentioned.

The train service provider 98.6% of trains arrived within two minutes of schedule significantly beyond that of 96% posed by the Land Transport Authority and that probably made SMRT certain enough to shift the of focus of resources towards other areas instead.

To cover losses in profit, SMRT began investing in properties in and within their stations with contractors such as 7-Eleven and Cheers – both convenience store providers.

Due to a system glitch between two separate signalling systems, the collision between two trains at Joo Koon Station resulted in the injuries of 29 people including SMRT staff members.

This is a stern reminder of the severity of the MRT issue now.

It may be difficult to settle with the fact that this incident and many other recent setbacks with our transport system could be avoided if SMRT’s initial plan 15 years ago was actually carried out.

And although we might not be completely certain of the reasons behind the plight of the MRT in this present day, with all the online feedback and sentiments that SMRT must be receiving, they should at least by now get a good sense of what are the problems needed to be remedied.

We wish those injured by the incident a quick and thorough recovery and urge the relevant authorities to resolve the issue as quickly as possible for the benefit of all Singaporeans. 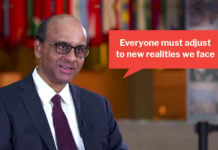