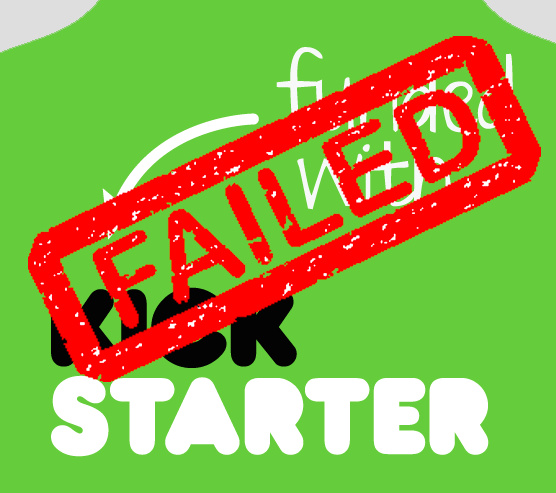 Crowdfunding is a relatively new way of raising funds in Singapore, and it works by taking money from complete strangers. Hehehe. Which is quite strange, because us Singaporeans usually tend to be wary about giving our very hard earned and not locked up money away for weird/unique/really cool products. 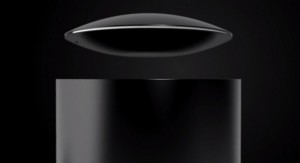 The mysterious UFO-looking thing aptly named Mars is a Hong Kong product that is a levitating Bluetooth speaker. According to their company Crazybaby, this speaker promises “sound technology so advanced it feels like magic.”

If Hong Kong, our very similar neighbour in terms of living standards and economic prosperity, can produce such a kick-ass product, we decided to check out Singaporean projects on crowdfunding websites to prove that we are not that far behind. Here are Singapore’s “best”:

1. My Pilgrimage to Anfield

I can’t fault this guy. Just look at his plea:

“I don’t have a sappy story. I have to see Stevie play before he leaves. Its my bucket list. I just have to raise money for the flight. I’ll handle the rest of it. YNWA” Unfortunately, Mr Zansher Husref has yet to raise any money for his pilgrimage, and needs $1200 more by 27 days. All the best, bro. I did my pilgrimage to Stamford Bridge before Lampard switched to the other shade of blue.

2. To get drunk in Singapore legally

But hey, alcohol’s expensive in Singapore right? The government announced the raising of the liquor tax by 25% last year during the Budget. 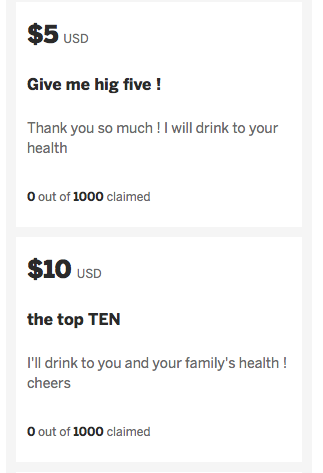 But you might want to consider funding him over the festive CNY period. He’s gonna drink to you and your family’s health for an additional ang pow amount of $10 USD! (S$1.33 = US$1.)  YAAAAAAM-SENGGGGGG.

We read somewhere that one in 10 people in Singapore are millionaires. This fearless dude wants to join the ranks and be a millionaire (billionaire) so freakin’ bad. The campaign’s pretty easy actually, he just needs a million people to donate a dollar each = millionaire. His math is flawless!

Appeal to emotion, check. Appeal to religion, check. People are getting desperate for money these days.

Yes, that’s the actual title of this Singapore campaign. However, the average Singaporean probably wouldn’t fund this, given their own difficulties with their own home loan. But Peter Lim could.

Lol.What does he want to buy, a room? 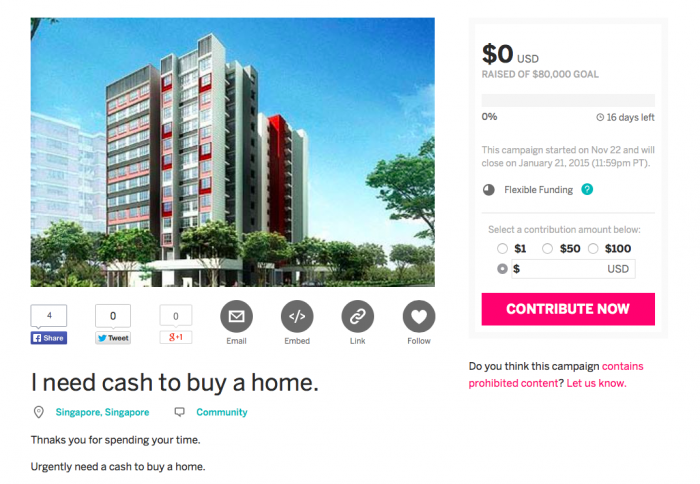 There seems to be something stupidly endearing about games with bad graphics and annoying music. Enter Trippy Car, a ridiculous game modelled after the infamous Flappy Bird. In the game, users have to tap on the screen to make Trippy the ugly yellow car “fly” over and avoid the ERP gantries. This looks so bad but at the same time, I want to try it out. Anyone with me?

Featured image via Doddle
With reference to Indiegogo, Crazybaby, Crowdtivate, The Straits Times