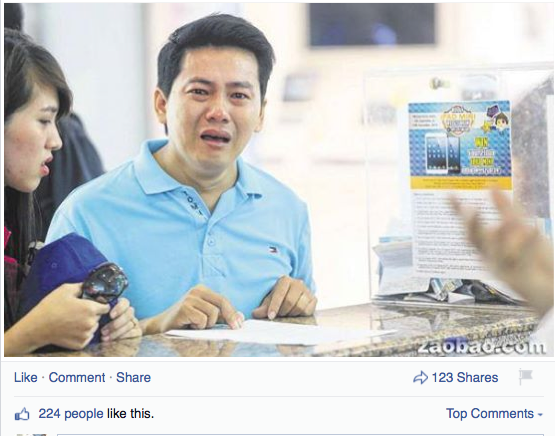 Update: Since then, a crowd-funding initiative to help the tourist has raised over $7,000 for him in a single day.

The frauds at Sim Lim Square’s Mobile Air who refunded a customer $1010 in coins are at it again, this time cheating a Vietnamese tourist with their unscrupulous business dealings.

The shop, which is being probed by the Consumers Association of Singapore (CASE), sold an iPhone 6 to tourist Pham Van Thoai for $950 after he signed an invoice.

Pham, a factory worker was on holiday in Singapore. He earns about $200 a month and had spent a few months saving up to buy the phone for his girlfriend’s birthday.

As he was about to leave, the salespeople demanded that Pham to pay an additional $1,500 for warranty, which he was led to believe was free all this while. Pham was told that he could not leave with the phone if he did not pay up.

Mobile Air refused to refund him and he broke down. Desperate, Pham knelt down and begged while crying. The retailers reportedly laughed at the man.

The staff agreed to return $600 to Pham but his girlfriend refused to leave without the remaining $350 that Mobile Air “earned” without actually selling anything. She called the police but when they arrived, the retailers showed authorities the invoice and offered to compensate only $70. Eventually, the Consumers Association of Singapore (CASE) intervened and Pham was refunded $400, which is still $550 short.

The internet was just as disgusted with what had happened.

It is nothing short of roguish behaviour from the salespeople. Once known as an IT haven, the mall has long associated itself as a place to do business with thugs. Sim Lim Square management has had to deal with two to three complaints daily. Sometimes, the police are called in to help.

What is alarming is that Mobile Air does not seem to be in any criminal trouble for their past behaviour. They have been asked to sign the Voluntary Compliance Agreement (VCA), which requires them to stop the unfair practices.

Despite 18 more complaints against Mobile Air, the business still got away scot-free, for now. There are probably more customers who have been cheated out of their money but chose not to lodge complaints. Others may not even be aware that they were scammed.

More needs to be done to weed out these swindlers. Businesses that exploit unassuming customers repeatedly should be fined heavily, since these retailers understand too well the language of money. It’s time to hit them where it hurts most.