Travellers love being able to connect to wifi available in a foreign country.

Now, imagine arriving at the airport from a long plane flight and syncing to the local wifi only to find out that you chalked up US$1,171.46 while on the plane even before you step foot into the country. What a welcome. 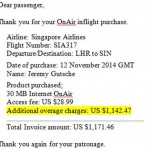 That is exactly what happened on board a Singapore Airlines flight bound from London to Singapore. Jeremy Gutsche, CEO at Trend Hunter, used the airline’s onboard wifi after paying a sign-up fee of US$28.99 for 30 MB of data.

For the bill to stretch by thousand dollars more, you would imagine that he watched an endless stream of movies on Netflix. But no, according to Gutsche, all he did was send a few emails and uploaded a single 4MB powerpoint document.

So what does it take to rack up $1,200 of internet use? In my case, just 155 page views, mostly to my email. I know this because for the first time I counted up my page views to see where all the dollars went..

At one point, I spent about an hour uploading one 4mb powerpoint doc. That doc probably cost me $100 to upload, so I hope my team liked it. I actually even emailed them a warning that my upload was taking a while. That email probably cost me $10. And yes, the pricing per mb was disclosed on sign-up, but I bought the $30 package, slept through most the flight, and really didn’t think I’d end up a thousand bucks past the limit.

The Canadian journalist took to Twitter and his website in the hopes that Singapore Airlines would lower his bill. They responded, though rather unenthusiastically.

@jeremygutsche Thank you for the feedback. Our colleagues are looking into this with our service provider, and they’ll get back to you soon.

Airlines Have The Last Say

Passengers flying Singapore Airlines or other airlines will probably not get compensation. Airlines have the monopoly to fix the price on a service that is becoming increasingly common.

Yet, this service is offered at a premium price. Most travellers do not want to pay for WiFi when they travel. So airlines increase their prices to get a profit out of a smaller base of business travellers who cannot do without the Internet and can pass the cost along to their employers.

To be fair to the airlines, having Internet amongst the clouds is not a easy accomplishment either.