Must Share News – Independent News For Singaporeans
Home People Singapore’s 10 Richest People In 2017, And How They Earned Their Wealth 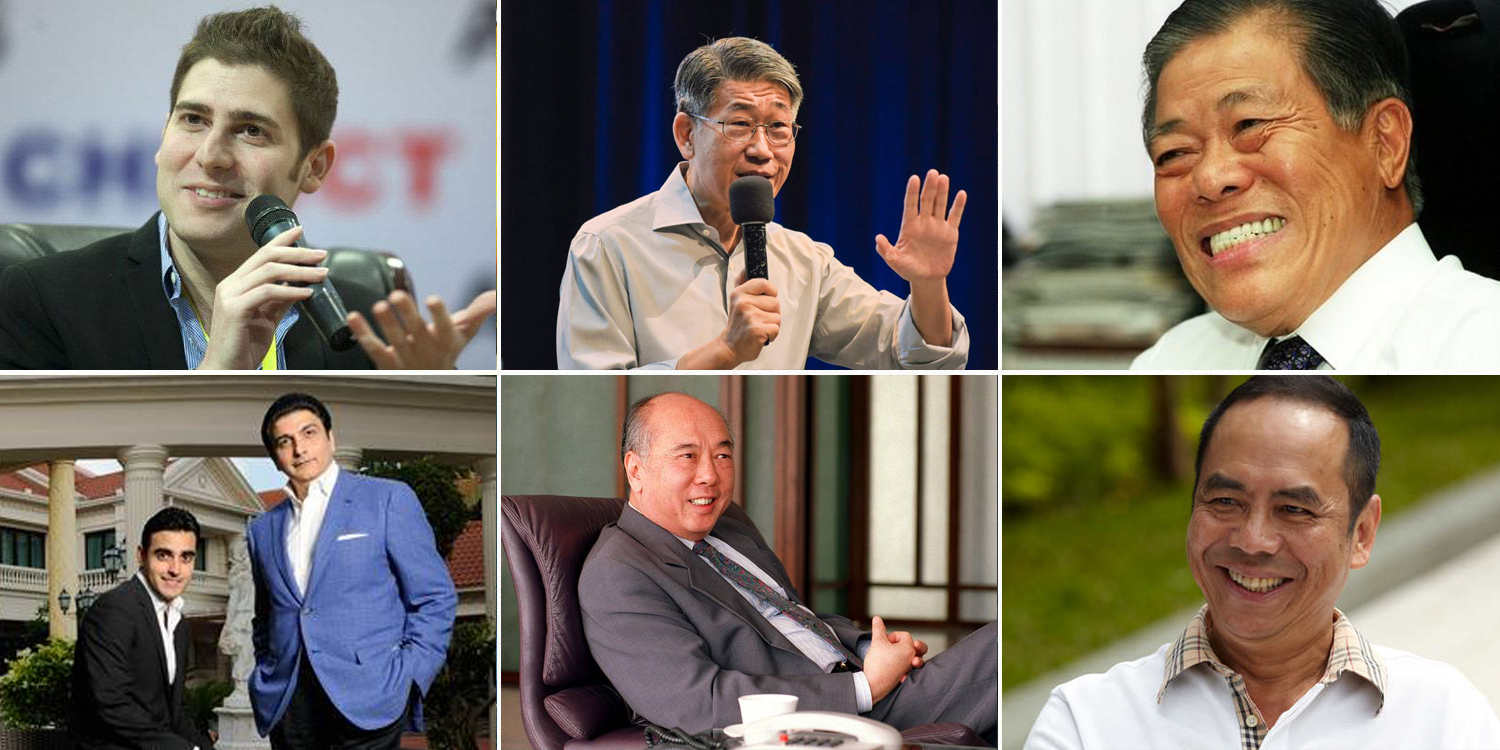 Money Is The Root Of All Happiness

Did you know that being rich is kinda cool? You get to enjoy fancy things such as helicopters, fine dining, and paying for WinRAR.

It’s also generally something most people seek after in life. 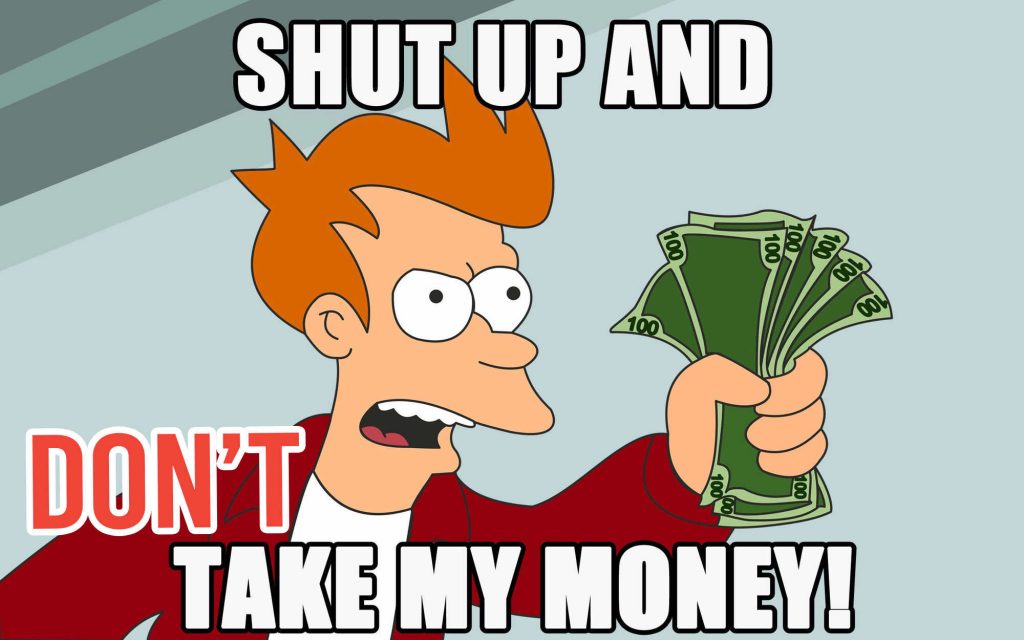 Which is why the following people decided to just that and not only become rich, but the richest in Singapore. So let’s take a moment to find out who these people are, how they became so filthy stinkin’ rich — and also why we should be jealous of them. 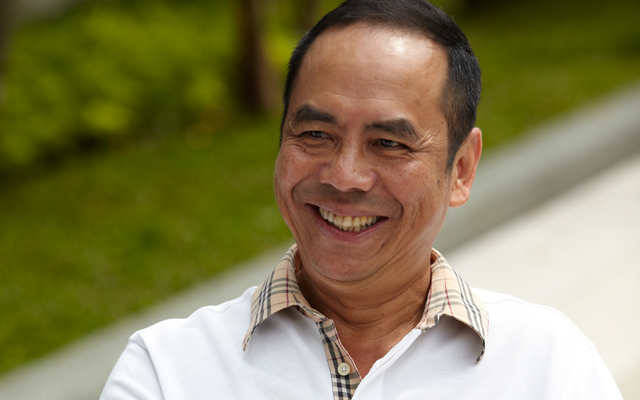 Net worth: $2.1B
Industry: Frozen foods

Born in Fuqing, China, Mr Goi had dropped out of school in his early days to work at his father’s grocery store.

Starting off a motor rewinding business that would eventually fail, Mr Goi then ventured into the world of frozen foods when he bought over – initially as a favour to a friend – popiah factory Tee Yih Hia in 1977 for $450k.

The self-made billionaire would then take over active management of the company in 1980 and see its revenue grow from a measly $300k to a whopping $62.4 million in a span of just 19 years.

Next up is the co-founder of one of the world’s largest palm oil producers, Kuok Khoon Hong.

Prior to that, he had been involved in the gains, edible oils, and oilseeds business since 1973 and has since established various oil palm plantations in Asia and Africa.

Following him is the leading landlord father-son duo of Raj Kumar and Kishin RK.

Net worth: $2.9B
Industry: Real estate

Known as the kings of “strata retail” (shops in malls with multiple owners) for their ownership of hundreds of shops in some of the biggest malls along Orchard Road, Raj Kumar and his – equally a billionaire – younger brother built Royal Holdings to become real estate’s wealthiest non-Chinese family operation in Singapore. They would eventually divide their assets in 2012 and go their separate ways.

In 2006, Mr Kumar’s son Kishin RK, founded hotel and property group RB Capital, a development company independent to his family empire — which quickly matched up Royal Holdings’ portfolio in a less than a decade. Both companies would go on to merge in 2014 which would result in an asset size of approximately $4.5 billion.

The duo is currently aiming for a gross asset of close to $8 billion by 2020. 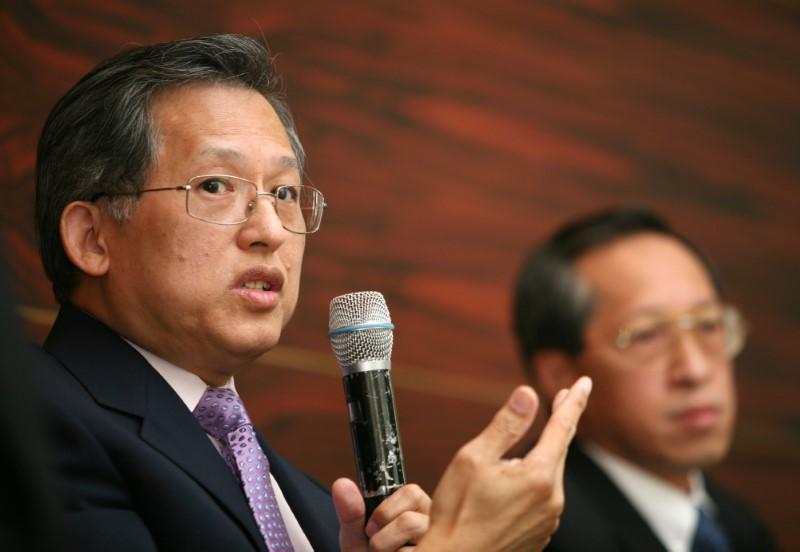 Net worth: $3.1B
Industry: Real estate

Despite being trained as a lawyer in London, Mr Kwek chose to join the Hong Leong Group – a family business founded by his father in 1941 – in the early 1960s instead where he has been its chairman since 1990.

He’s also the chairman of Singapore’s second-largest property developer City Developments Limited (CDL), which owns more than 250 subsidiaries and has a global presence in over 25 countries. It currently owns Millennium & Corpthorne Hotels which runs 130 hotels globally. Locally, the CDL has developed over 40,000 homes.

Among all entries in the list, Mr Kwek’s net worth sees the most change — having been worth a whopping $7.1 billion in 2015.

Still, to lose $4 billion and still be top ten richest is an impressive feat.

Coming up again in the real estate industry is the quartet known as the Kwee family. 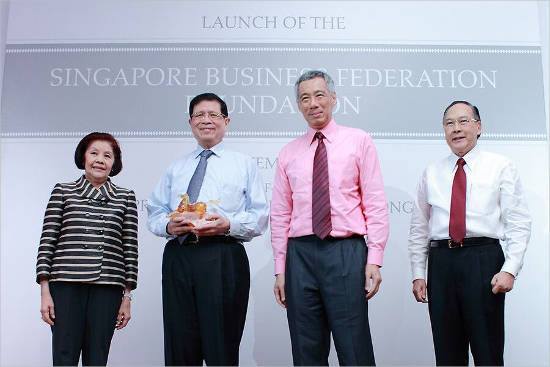 Net worth: $5.4B
Industry: Real estate

Made up of Kwee Liong Keng, Kwee Liong Tek, Kwee Liong Seen, and Kwee Liong Phing, the four brothers are the sons of Indonesian textile trader and real estate developer Henry Kwee, who migrated to Singapore in 1958.

They currently run Pontiac Land – a luxury real estate and hotel development company founded by their dad in 1961 – which impressive portfolio includes luxury hotels such as Regent Singapore, Ritz-Carlton Millenia, Conrad Centennial Singapore, The Capella Singapore,  as well as malls and office blocks such as Capitol Piazza and the Millennia Tower.

To which they donate to regularly.

Coming from the banking industry are the 14 children of the late Khoo Teck Puat, collectively known as the Khoo family. 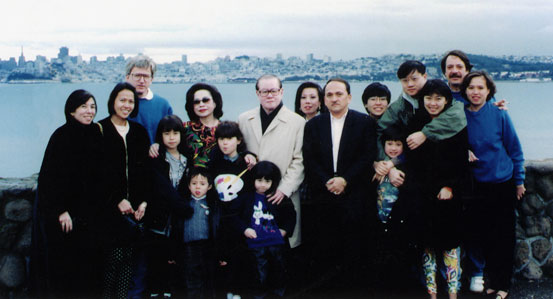 Net worth: $6.3B
Industry: Banking

Aside from having a hospital named after him, the late Mr Khoo also founded Maybank and was at one point Standard Chartered Bank’s biggest shareholder. The shares would be inherited by his children upon his death in 2004 — to which they sold for $4 billion to Temasek Holdings.

Since then the siblings have been focusing on primarily on philanthropy as well as the Goodwood Group of Hotels. The Goodwood Park Hotel is currently managed by the late Mr Khoo’s daughter, Mavis Khoo-Oei.

The Khoo Teck Puat hospital was a result of them donating $40 million to the National University of Singapore.

Coming in as one of the oldest entry in this list at 88 is former United Overseas Bank (UOB) chairman Wee Cho Yaw. 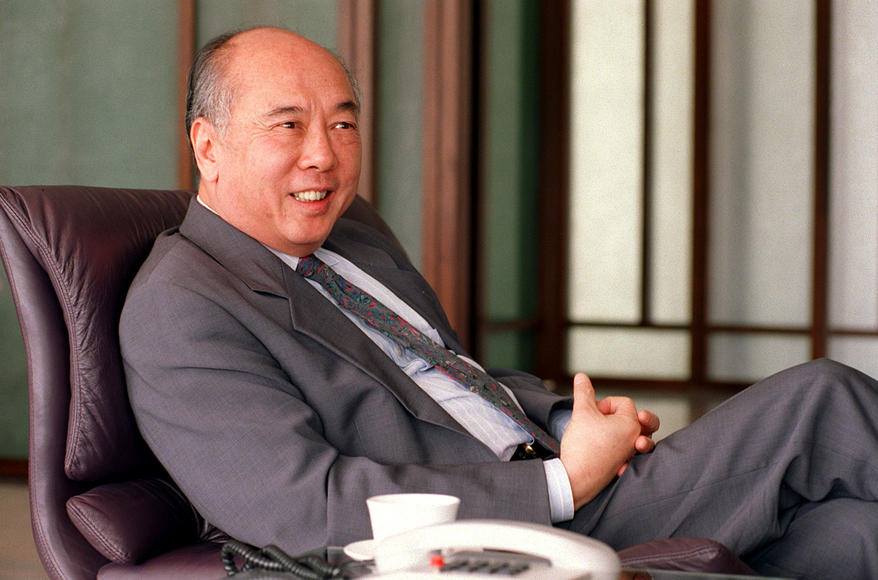 Net worth: $6.5B
Industry: Banking

Having his education disrupted by the Japanese invasion of Singapore, Mr Wee would spend most of the Japanese Occupation with his family in Indonesia. He would later return to Singapore and be involved in anti-colonial politics before being investigated by the British authorities.

He started out his working life at family-owned business Kheng Leong before joining UOB – which was co-founded by his father – as its youngest director in 1958. Following that, he would spend time in London to study a British bank’s operations.

In 1960, Mr Wee would take over his father as managing director and move UOB – then known as the United Chinese Bank – into foreign exchange and international trade financing. By 1965, he had successfully grown the bank’s trade financing business more than a hundred-fold since before he took control and also enlarged their assets nearly nine-fold.

Who could imagine that a fishing net salesman could become – at one point of time – Singapore’s richest person? 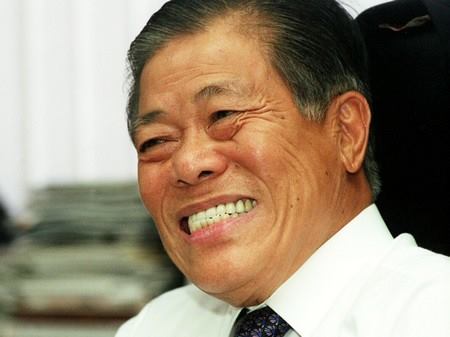 The uneducated Mr Goh first started his entrepreneurship by creating his own brand of paint, Pigeon Paint, after realising that the British army were auctioning off rotten paint at low prices. His business would boom when imports of paint would be severely restricted by the Government.

He would then set up his first shop in 1955 before becoming the main distributor for Nippon Paint in 1959 and subsequently become Asia’s largest paintmaker from the 60s.

In 2014, Forbes Asia chose Mr Goh as one of its Heroes of Philanthropy.

Not too bad for a guy that was born in poverty, huh?

The co-runners up in this list are the sons of the late real estate tycoon, Ng Teng Fong. 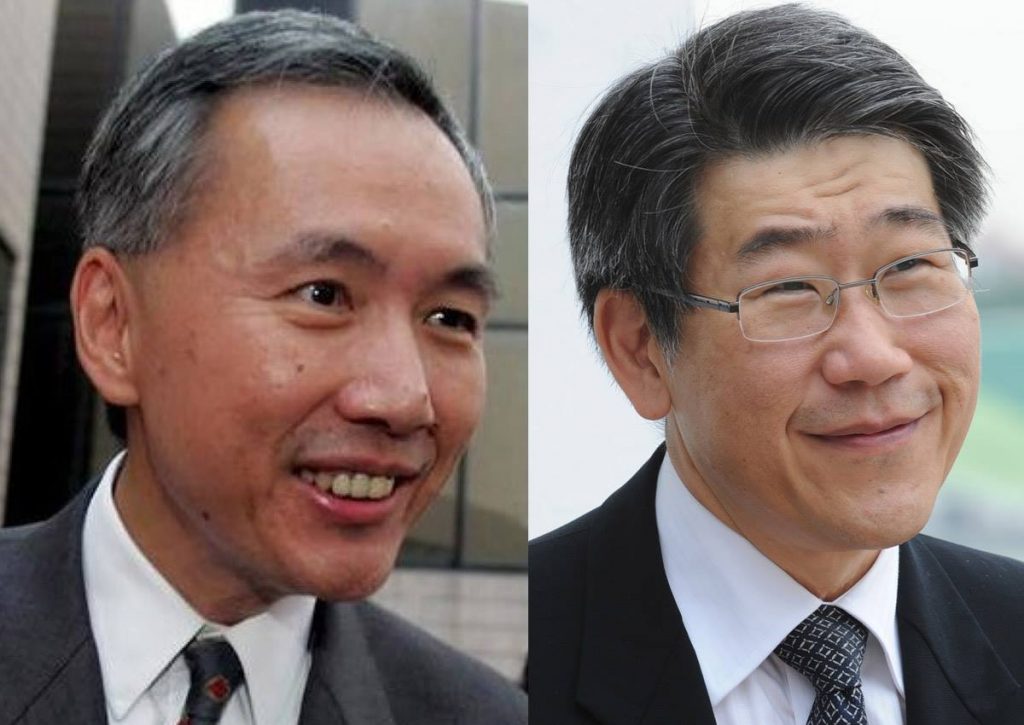 Collectively, both brothers control Singapore’s largest private landlord and property developer Far East Organization, which was founded by their father Mr Ng — who came to be known as the King of Orchard Road.

However, Far East is mainly controlled by younger brother Philip Ng, while Robert Ng focuses on more overseas projects instead. He is the chairman of one of Hong Kong’s leading property companies Sino Group, which develops properties for sale and investments.

Check out some of the stuff they own in Singapore here.

Topping this list is one of the people responsible for creating Facebook — and it’s not Mark Zuckerberg. 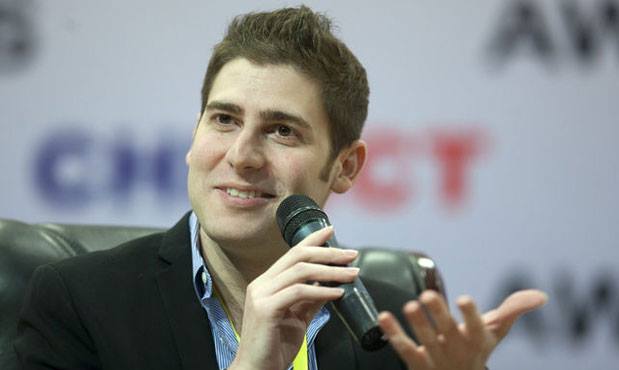 Seen by some as a move to avoid taxes, the Brazilian renounced his US citizenship in 2011 and cited his interest in working and living in Singapore, where he has resided since 2009.

Mr Saverin was booted out of Facebook in 2005 after staying on the East Coast to work on a separate startup instead of joining it in Palo Alto. Despite this, he would sue Facebook and walk away with 4% or 5% of the company after an out-of-court settlement.

He currently owns $53 million worth of Facebook shares and has also made investments in startups such as Redmart and 99.co.

There you have it, the top 10 most richest people in Singapore. Kinda seems like a good amount of them simply acquired their fortunes from their dads but that’s probably just our envy speaking.

Did this change your life? Do you want to stop being poor today? Perhaps we should start working in real estate as well. Maybe one day we can have the same superpowers as Batman.

Forget Captain America or Superman, they are the true superheroes that we should all aspire to be.