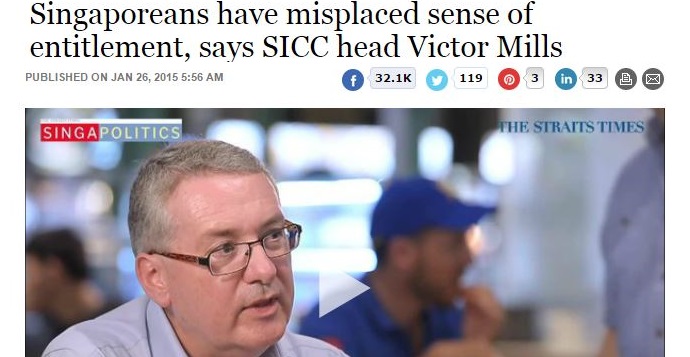 According to SICC head Victor Mills, Singaporeans think the Government owes them a living.

Victor Mills is a 55-year-old Singapore citizen born in Northern Ireland. He was posted to Hong Kong, and then Singapore while working in an international bank during the 80’s. As chief executive of the Singapore International Chamber of Commerce (SICC), he was recently asked about his thoughts on Singaporean workers, and his opinions may draw ire among a small section of the community.

His laments include Singapore’s materialistic society (which is true), excessive job-hopping among employees, and the unwillingness to accept feedback.

Reactions to the interview conducted by The Straits Times journalist Walter Sim were predictably indignant, but not without reason: 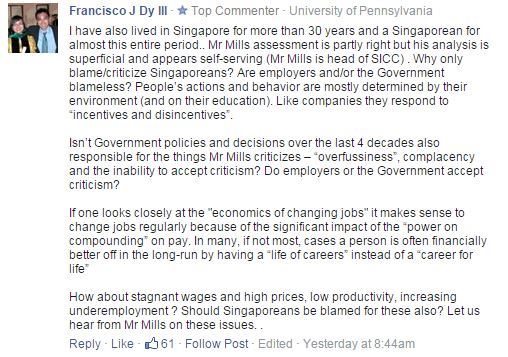 Another commentator pointed out the top-down mentality that Mr Mills and other employers were employing (no pun intended).

How dare employees not stick to one job and save employers the trouble of cutting costs! Perhaps instead of blaming employees on their lack of hunger, employers can also do more to keep employees happy.

Really though, the situation is a two-way street.

Of course, Mills’ answers aren’t exactly his fault. The interviewer does his part in asking leading questions, such as “What repercussions will Singapore face if the negative workplace attitudes persist?” Mills ended up recounting a Singaporean-bashing anecdote, talking about how a Silicon Valley investor who founded a start-up in Singapore, only to find that IT developers here have unrealistic expectations of pay, despite being not good enough.

In his defense, Mills did put out the disclaimer that his anecdotes were extreme. However, his opinions may have been formed out of these extreme examples, which may be outliers and thus not the status quo.

One example was when the SICC hired an assistant finance manager who stopped coming to work after just one day even though she “had a lovely personality with all the right experience and skills”. The lady thought the job wasn’t for her, but he thought that doing so was “not giving (herself) or the organisation a chance.”

He was speaking from the perspective of the employer, who would have had to hire another person deemed not as suitable. The company may have resented losing her services and thus blamed her attitude and lack of professionalism.

On the other hand, the woman could have been more professional and stuck at her job for more than a day. She probably shouldn’t have applied for the job. SICC was inconvenienced because the woman chose not to serve her one-month notice. We’re not going to lie; what she did was irresponsible.

This unhappiness at the workplace may not entirely be down to the employees though. Many Singaporeans still choose to stick their job out for a few months, only to continue being unsatisfied.

Being Under Happy — Whose Fault Is It, Really? 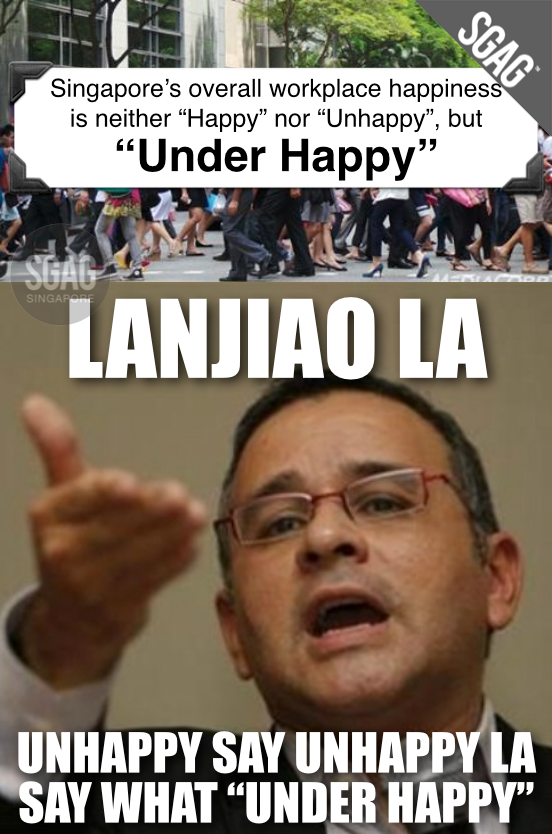 Singaporeans being  under happy at work is not a new revelation. As Mills notes,

He seems to imply that Singaporeans are moving jobs solely because of money.

Mills further emphasises his point, saying, “In our headlong rush for more money, a lot of values seem to have been lost…So we’re now a more stratified and polarised society, which is why you hear people longing for the return of the kampung spirit.”

Perhaps workplace dissatisfaction is not solely based on salary.

However, our mentality of earning as much money as possible in a short period of time may also lend to the perception that Singaporeans job-hop excessively. Working less for more remuneration seems to be the ultimate goal, and until this aim is achieved, job-hopping Singaporeans may never be happy at the workplace. But having more money does not guarantee happiness either!

So, in considering the problems that employers face, Mills may have forgotten that employee satisfaction in their job also plays a part in not job-hopping.

Tempered expectations for all may be the key

Mills did take the chance to offer his thoughts on manpower policies and ways to improve on them.

In other words, SMEs suffer the most from current manpower policies. If not tempered, SMEs may cease to exist in Singapore.

We think the relationship between the government, employers, and employees may be symbiotic, and everyone has to help each other. Employees can’t be paid too little, but employees may also have to temper their remuneration expectations.

One thing’s for sure — Singaporeans can’t be enticed with higher salaries alone. Company welfare is just as, if not more important. Perhaps a slight lowering of expectations and an increase in valuing employees (i.e. not over-valuing profits) may just do the trick? Company loyalty is a value not rewarded enough, especially after age 40, if the high turn-over rates are to be believed.

Whether Singaporeans are too entitled or not because of economic success remains to be seen. Suggestions such as overhauling the education system and removing “useless” courses from curriculum have been made, but doing so would suggest that all Singaporeans study solely to supplement the workforce.  There should still be some room allowing those who wish to pursue their passions, to do so without pressures to join the workforce.

Forcing everyone to be part of the economic machine would generate a money-rich, but “under happy” society.