Must Share News – Independent News For Singaporeans
Home People Social Issues 5 Reasons Why Singaporeans Don’t Clear Their Own Trays After Eating In... 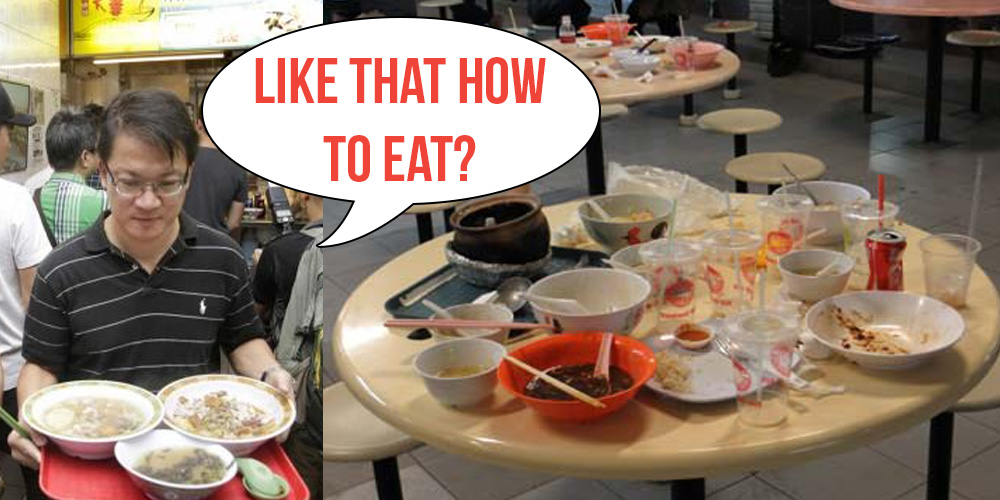 Imagine yourself slaving away at work all morning, eyes glued to your computer screen vigorously mashing key after key to finish the work your boss wants immediately. You’re tired and hungry. You got up early only to be packed like sardines during your commute to work that was hit by another MRT delay, meaning you arrived late for work despite leaving early.

The only thing you can hear other than your boss’ nagging is your stomach rumbling. 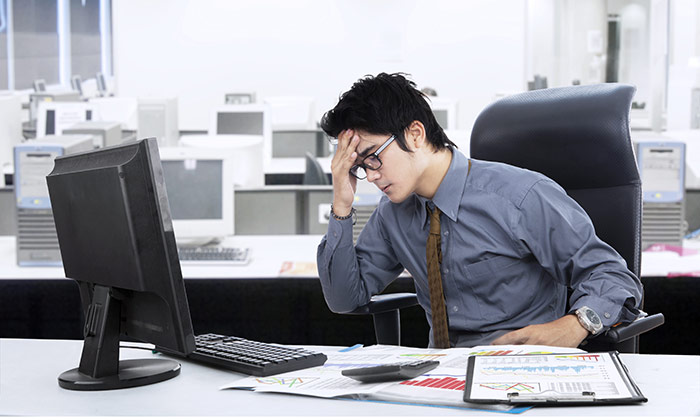 Then it’s noon. “Finally”, you think to yourself, as you hastily save your document and head out a nearby kopitiam to satisfy your hunger. Nothing else matters right now as you gleefully run through the options of food available in your mind.

As luck would have it, you find an empty table and scramble for it — but it’s is in a mess, full of dirty plates, drinks spilt over and chicken bones lying on the table in a pool of thick gravy. 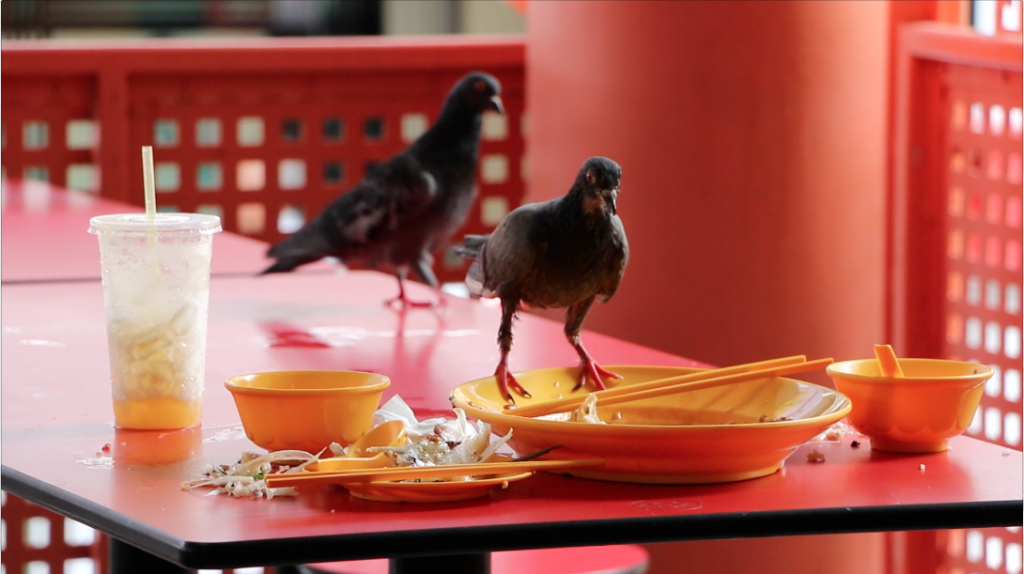 We have a dream — a dream of one day sitting down at a hawker centre and being able to eat without having to wait for a cleaner to clear your table or god forbid, clear it yourself.

Just think how much faster and easier it would be if everyone simply cleared their trays when they were done. A small act like this would not only improve the overall cleanliness and hygiene of the place but also speed up the process of getting a table, especially during peak hours. 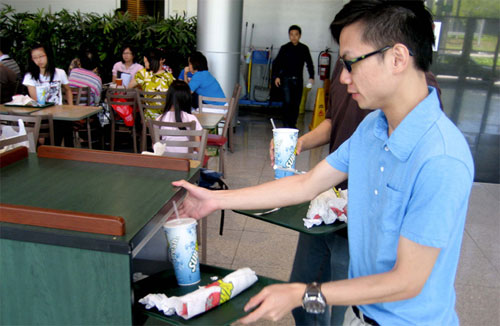 Why Is This Happening?

Is it really that difficult to clear your trays after your meals? Are Singaporeans simply too lazy to do so?

Why do Singaporeans not clear their trays after eating at hawker centre/kopitiam/food court?

That’s a question that was recently asked on Reddit, and based on the responses, here are 5 reasons why Singaporeans don’t clear their own trays:

1. So Cleaners Have Jobs

By far the most common reason why Singaporeans do not clear their trays was because they feel that doing so would ultimately rob the cleaners of their job.

Like user tediousday, who voiced concerns on affecting the cleaners’ livelihoods.

User mrkiasume revealed what actually happens to the cleaners when we help clear our trays.

Many also shared stories on how they wound up on the receiving end of a mouthful when they tried to clear the trays themselves.

User tvbusy noted that some cleaners prefer to clear trays directly from tables.

However, while this may be true, perhaps we should blame poor management for this situation, as rather than sacking cleaners, the management could find other things for them to do rather than clearing trays.

For example, cleaners can be provided with newer and better cleaning equipment to wipe the tables more thoroughly, as the tables are sometimes left oily and grimy even when customers clear their own trays.

And better design of hawker centres will also ensure that cleaner will find it easier to clear trays from the tray return stations rather than from tables.

As user Paul Denlinger explains, those who pay for the food at hawker centres are also paying for the clean-up service after.

Seek Kok Boon pointed out that the management, which hires the cleaners, charges stalls for clearing trays.

Some have even compared it to dining at restaurants where guests aren’t expected to return their dishes due to that service being included in payment.

Hence, user Jimmy Yap says it’s simply not his duty to clear trays, likening it to wiping the table and washing the plates. 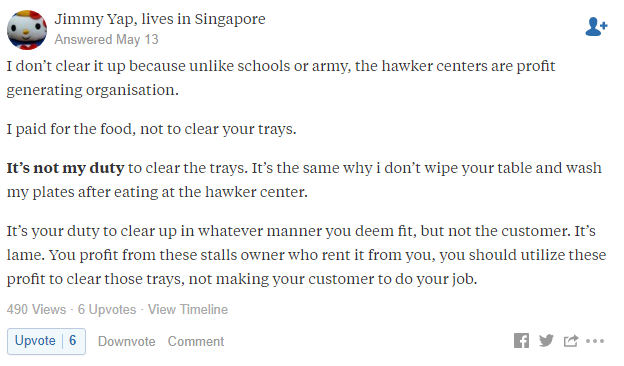 However, in a civilised society, should we do things only because it’s our duty, so should we also do things that are not our duty out of consideration for others? That is the question. 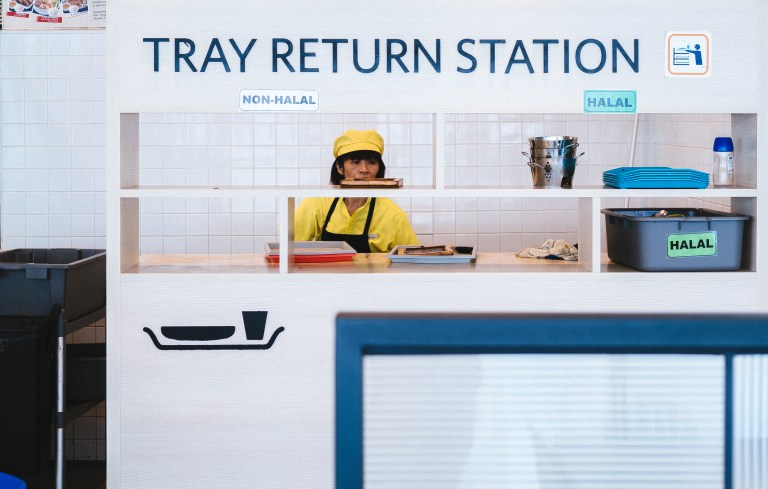 Another reason why Singaporeans tend to not clear their trays is because of the location of the return areas.

It is not uncommon for huge hawker centres to be packed during lunch hours. Oftentimes patrons who are rushing back to work are just unable to spot any tray return points nearby, partly due to the crowd.

CeilingTowel aired his frustrations about not being able to find the tray point.

Perhaps, as we mentioned in point 1, some hawker centres need to be better designed.

Similarly, office workers might not want to risk staining their clothes with substances like chilli sauce if the return points themselves are not cleared promptly.

Some might also feel that the cleaners, who are equipped with cleaning equipment and don’t have to dress up nicely for work, are better suited to clearing the trays amid the muck.

However, users like Leofax were quick to note that while they did not clear their trays, they believed in assisting the cleaners by tidying up their food to facilitate the process.

While there have been numerous efforts campaigns such as “Clean and Green” and “Goodness Gracious Me!” in 2013 and 2008 respectively, they were largely unsuccessful as people eventually lapsed back into their old ways after a while.

“It worked out in the morning, but by evening no one put their plates back anymore,” The Straits Times quoted Ms Angie Ng, a cleaner at West Coast Hawker Centre, as saying.

As tray return stations were not present in most hawker centres and kopitiams of old, it became a social norm to not clear your trays. Installing clearing stations won’t make everyone do so automatically, and normalising a tray-return culture would take some time.

And the social norm of not clearing one’s tray might actually deter people who wish to return their trays, as they don’t want to stand out.

The desire to conform is shared by user hyosurvus and Groupoop. 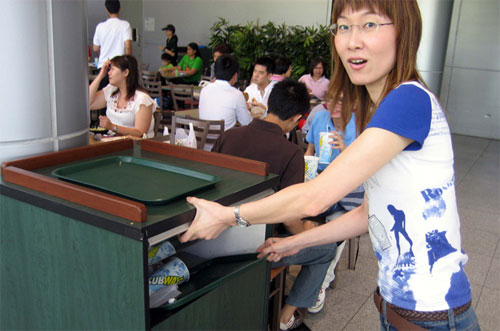 Let us know in the comments whether you agree with what was said and if you do, what is your reason for not clearing your own trays after eating at coffee shops?

Featured images from WorldOfBuzz and WordPress.