Duo arrested for illegal public assembly, netizens have no sympathy

On 4 April, two men clad in identical red hoodies were arrested for holding up placards with the words “You can’t silence the people” and “Injustice” outside the Istana for half an hour, after requests from the police to stop their illegal public assembly.

The reasoning was that they had no permit.

Under the Public Order Act, a permit is required to hold a protest or demonstration anywhere outside of the Speakers’ Corner in Hong Lim Park.

Rather than worry about the right to public assembly or protests, netizens had rather unkind words for them instead:

That’s right folks, people speaking up for our rights are ‘troublemakers’

Often, reactions to news are a good way of gauging sentiments among the public. The netizens’ reactions here appeared to be overwhelmingly negative, believing that the two men were being stupid.

What makes them stupid, though? Was it knowingly breaking a law that is designed specifically to prevent any sort of protest, or was it speaking up for basic human rights?

Our guess is the former. If a law is there and someone breaks it, they’re considered dumb, regardless of the law in question.

Prominent Singaporean activist and blogger, Kirsten Han’s commentary on the matter suggested that the laws against public assembly and sedition — what Amos Yee got in trouble for — may no longer make sense in today’s context, following the death of Lee Kuan Yew. She believed that Singapore is ready to have more freedom of speech and right to public assembly.

Unfortunately, the netizen reactions prove contrary to her opinion. Singaporeans aren’t ready to relinquish the laws which protect them from being offended, and the authorities are more than happy to oblige.

After all, the policies, and enforcement of the law, are actually made with the community in mind. Look at how quickly Amos Yee was arrested. That 20 police reports were made against him likely led to him being arrested more swiftly.

Human rights do not equate to anarchy 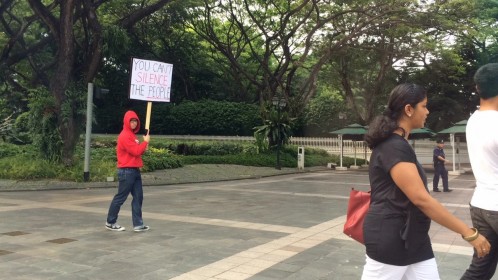 The growing discontent of living in Singapore and there being no outlet of expressing them has already led to an outpouring of resentment online. Should the Internet also become policed, the placard “You can’t silence the people” seems more than justified.

There is also a growing frustration among a minority; the ones who believe that the state should provide for more basic human rights taken for granted in other countries. The frustration stems from the so-called majority refusing to listen, believing that giving more freedom would lead to a collapse of society and cause unrest.

The Straits Times’s editor-at-large, Han Fook Kwang, proposed that with the death of Lee Kuan Yew, politics in Singapore would become more ‘normal’. That is to say, Lee Kuan Yew’s stranglehold was not normal in any sense of the word. A one-party rule would not have been possible without his approach, and Han Fook Kwang acknowledges this.

The process into a more pluralistic polity will be hastened, he says. But it appears Singaporeans are still resisting the new era of politics, believing the opposition are threatening Singapore’s stability.

Could it be that the populace is suffering from a LKY hangover — they appreciate what he has done so much, that everyone is willing to have things stay the same even when he isn’t around anymore?

Change will come, whether LKY is around or not. The proverbial chains are free, but we appear to want to slink back into our caves because the sun is shining too brightly. I say, give your eyes some time to adjust to the brightness, and then you may venture out again, and possibly discover that human rights can indeed co-exist with safety and public order.

If that sounds like an utopia, so was Singapore’s vision to be a first-world country in 1965. We did it then, and we can take the next step now, with a different leader at the helm.