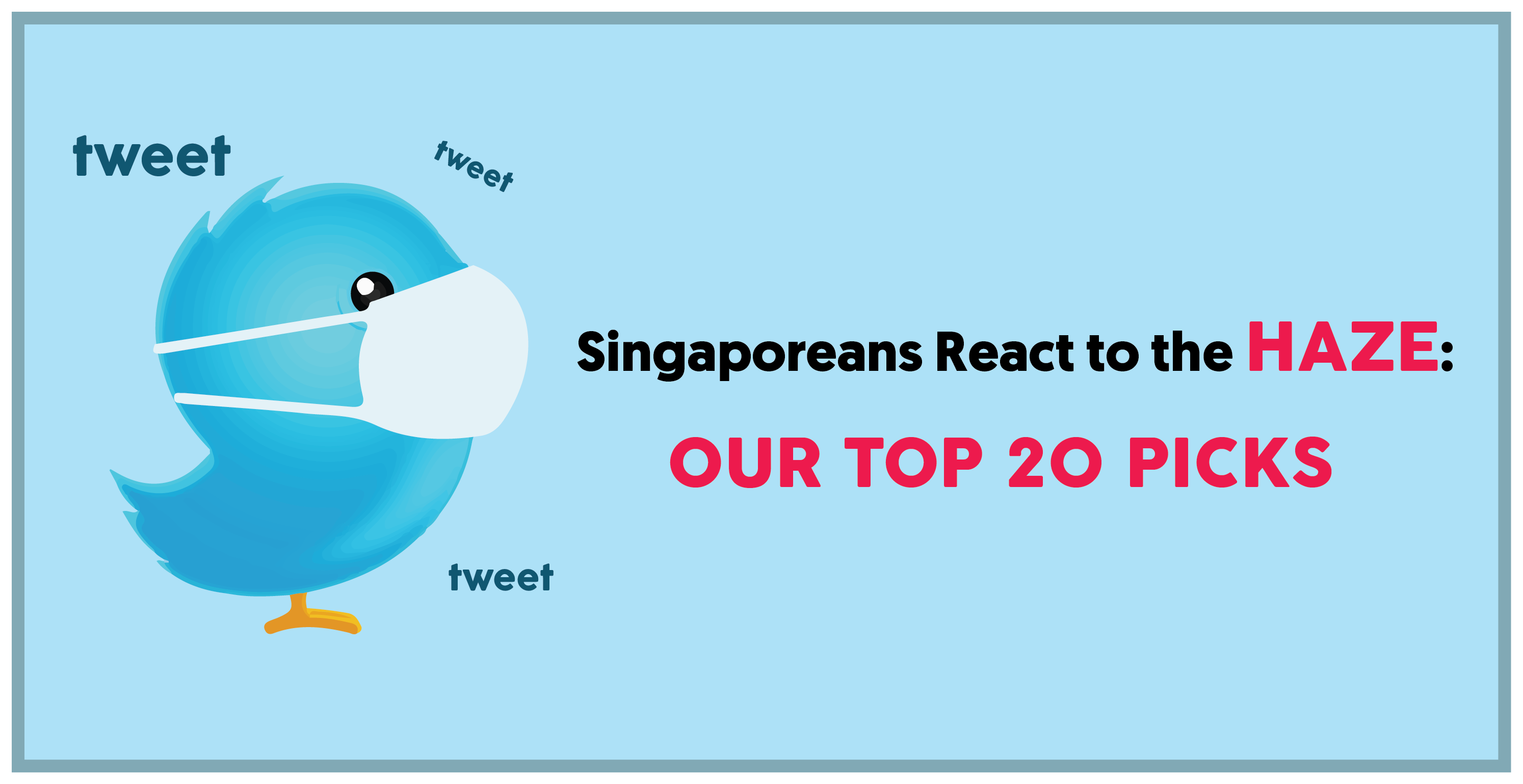 Hazy highlights from the hazy season

It’s that time of the year again when the sky is not as blue, vision is not as clear and everyone has that white cup-looking thing on their faces… it’s the season’s greetings from the haze!

The haze is everywhere. From outside your windows, to the indoors, and definitely all over your Twitter timeline.

But, if you haven’t noticed by now, the situation has been improving over the past few days.

The National Environmental Agency (NEA) said on Monday (21 Sept) that the spread of the haze has reduced, resulting in Singapore’s air quality in Singapore hitting the low end of the “Unhealthy” range. *inserts tears of joy*

As we live in the Technology Era, Singaporeans are used to expressing ourselves with our online “voices”. It should be of no surprise that many Singaporeans have voiced their concerns and opinions about the ongoing haze.

With that in mind, I present to you the top 20 best tweets from this year’s hazy season.

A classic line from the The Script’s famous tune Breakeven. This is the most classic tweet about the haze that’s bound to be tweeted by someone every year.

Instagram has come up with a new filter that is only available in Singapore. It's called haze. #sghaze pic.twitter.com/4WK55GGkQS

OMG. A NEW FILTER ON INSTAGRAM!? Yup. Exclusively for those residing in Singapore. LIMITED TIME ONLY.

It’s all about the filters nowadays. And it’s definitely not easy finding the right filter. But with the all new haze filter, there’s no need to worry about it at all. How to get the filter? Well all you gotta do is to launch the Instagram app, snap a picture, post it and you’re set!

Everyone loves a good pickup line, and especially one that is relevant to recent situations — the haze. Use this on your crush and I’m sure you’ll get them swooning over you (or at the very least, an eye roll).

Hey, at least you tried.

N95 masks are evidently old school and so last season, but the Muttons are proving not to be! Find out how to stay safe and where you can get one of these stylish masks from these fine looking gentlemen.

Protect yourself from the haze, in style.

Are you ready for the next most highly anticipated films of the season? No, not The Maze Runner — that came out ages ago.

And their ensuing sequels.

The haze runner, the hazardous trial, the sore throat cure, the smoke order

For those interested in reading the books first, you might wanna check out your nearest local bookstores for these titles today!

With the haze around, it’s been rather humid lately. Who needs BingSu when you can get FREE ICE CREAM, and that too from Indonesia! ‘Haze 跟 (gen) Dust’ sounds refreshing already.

Everyone knows getting abs is not easy at all. But seems like we won’t be needing the gym for a while.

I guess my new (AND FREE) not-so-personal trainer is doing a great job. I feel my six-pack abs forming already, do you?

Lecturer: why r u late for class?
Me: i was in class the whole time
Lecturer: i didnt see u
Me: Must be the haze

Lecturers these days are tough. It’s so difficult to come up with a good, solid excuse.

Doesn’t it suck when you’re just a few minutes late but you’re marked absent for the entire lesson? Worry no more, because this excuse will get you off the hook all the time. (Note that this excuse will only work during the haze period and might not work on any other days)

As you can see, we really have a love-hate relationship with the haze. It gets annoying, but then again it’s helpful :’). #thankyouhaze

With the haze, it’s definitely been difficult getting your hands on those N95 masks, but not to worry. The above alternative is not only readily available in stores, but also comes in different colours and sizes too. With one “mask” being able to be used by 2 people, this is your chance to show some love and care to the people around you. :’)

The haze is so terrible that i can't even see my money #sghaze pic.twitter.com/VYPRZZsZrm

This guy obviously has the money, but the terrible haze has faltered his vision. We feel you bro. #mustbethehaze

I tried to catch some haze earlier. I mist. Fog my life. #haze

Basically. Pun of the season. HANDS DOWN.

"the haze is higher than my psle" pic.twitter.com/Y3qLX3Ysgf

Another one of the classic haze tweets. As long as parents don’t start setting expectations based on the PSI reading, WE’RE GOOD.

Because we all know the haze is a brilliant PSLE student who has previously broke the record for scoring up to 401 points. #dontmess

The request for schools to close is another one of the classic tweets which is bound to appear every year. It’s pretty ironic how the government consistently reminds us that they care about the health and welfare of the students, but school still goes on despite the horrible haze. It doesn’t really make sense does it. DO YOU HEAR US GOVERNMENT.

bringing back my haze playlist this season pic.twitter.com/298MoNsRiY

You know you’re talking serious business when you have a playlist for the haze. Having to stay indoors sucks, but at least music will always be there for you.

The app Joox have the haze & dust playlist 😂😂😂 pic.twitter.com/S1MyjAXD26

Another popular playlist this season is the “Haze & Dust” playlist on the JOOX App. (JOOX is a free music streaming application for all you music lovers out there!)

Who knew the haze is also a good time to jam to some of T.Swift’s tunes? This rendition is already stuck in my head! #supportlocal

Girls, it's important that your manicure changes with the season. This week: Haze Grey. #SGhaze pic.twitter.com/Uy6JVCAla1

You read right girls. It is important that you change the colour of your nails with the season. Don’t wanna be outdated now do we? If we’re gonna brave the haze, we should do it fashionably.

What other colours would you think would suit the season? What about HAZElnut brown hmmmm….

Your love for your significant other is so strong that even the haze isn’t able to break y’all apart. This is truly #relationshipgoals :’)

My apologies Bruno Mars, but who needs to catch a grenade when you can brave the haze together right?

With the haze so bad, it’s difficult to see our future, let alone the nation’s future. What will Singapore become? Will we be the next lost city?

Will we be mist? #hazegtg

I think the haze is back with a vengeance 😢

We all thought the haze was finally coming to an end but NOPE, it’s just the beginning. Like Bruce Wayne on The Dark Knight Rises, the haze came back, and it’s better than ever. When is this going to stop!?? #hazeRaBAK

On the bright side, the haze has got people coming up with rather interesting and creative solutions to get rid of it. Turning the Singapore Flyer into a gigantic fan might actually work. We won’t know if we don’t try right 😉

This mess is getting haze-ardous

With the unpredictable haze, it’s difficult to know when exactly it will end. For now, all we can do is to make sure we are ever ready to brave the haze by keeping healthy and staying hydrated at all times!

Hopefully this haze-ardous mess will be gone soon and we’ll all be able to take beautiful un-hazed pictures of Singapore! Take care everyone!