Must Share News – Independent News For Singaporeans
Home Inspiration Humour 10 SMRT Memes That Will Leave You Breaking Down In Fits Of... 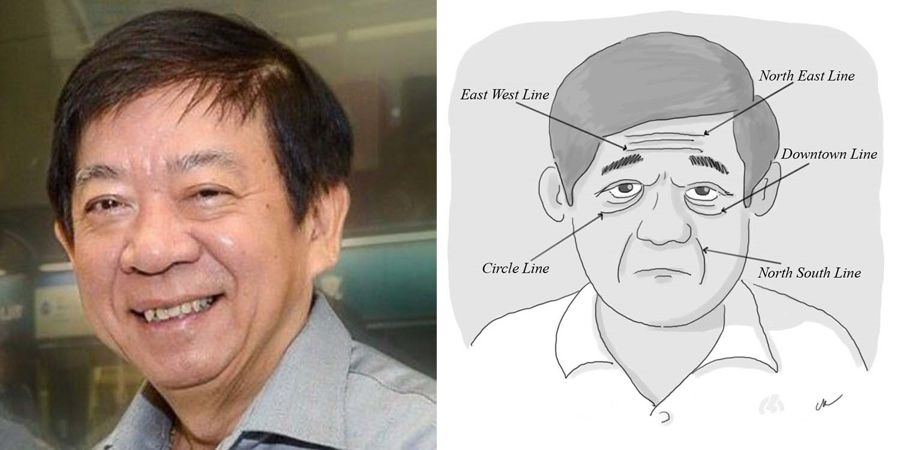 Singaporeans Unleash Their Funny Side Amidst The Numerous Train Breakdowns

This must be the worst week for train service authorities in Singapore’s entire history. Following the collision of two trains at Joo Koon station on 15 Nov, four out of the country’s five train lines endured breakdowns this week.

On the same day as the train collision at Joo Koon, all three of SMRT’s train lines, East-West, North-South and Circle-Line, broke down leaving commuters struggling to find an alternative route to travel.

With the Land Transport Authority and SMRT scrambling to account for the disruptions, SBS Transit got a major case of FOMO, and decided to join the party. On the evening of 16 Nov, SBS Transit’s North-East Line services were disrupted after a train fault occurred at Clarke Quay station.

Given that things already suck so bad, maybe the best way to deal with our train problems is to laugh at it. Perfect for the next time trains break down, here are 10 train memes to calm those nerves while waiting during those infuriating train faults. 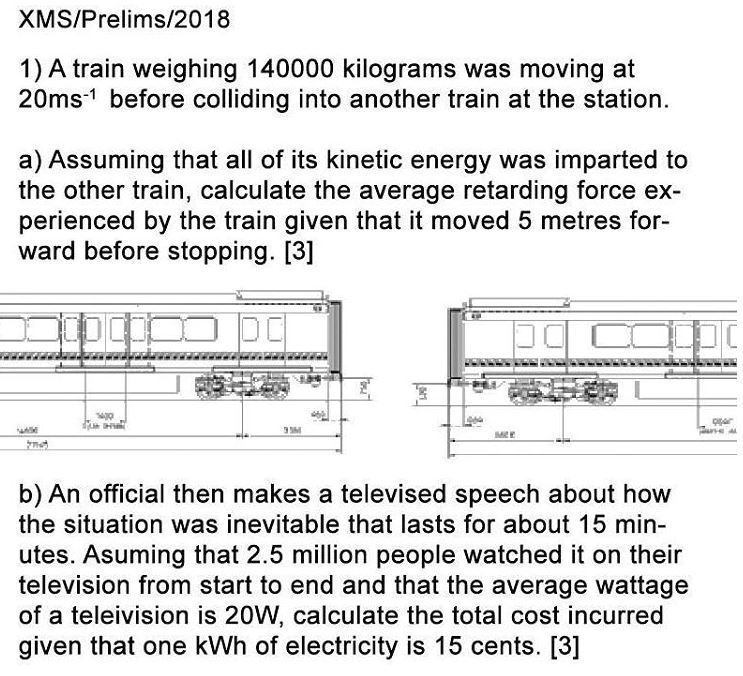 How much kinetic energy was transferred from the second train to the first during the train collision at Joo Koon MRT? Well, this intellectual jibe was brought to you by the highly-acclaimed “academememics”from xinmemes_sec. With the examination seasons in full bloom, the quasi-prelim question has done what our trains have failed to do: being timely.

Unfortunately, we at MustShareNews have returned all knowledge of physics to our teachers. So, the only retarding force we know of is the pushing of blame to others.

2. Defying the laws of gravity

If like us, you are more artistically than mathematically-inclined, here’s a classical music piece featuring our Transport Minister.

Remember when Transport Minister revealed that the water pumps at Bishan MRT were meant to safeguard against torrential rain that would only come “once in a hundred years”? Well, Fuhuamemes have twisted Mr Khaw’s statement to mock that SMRT has endured a second crash in its 30 years of history. If you like Queen and a good laugh about our train services, then this is the meme for you.

Now some of us prefer classic memes such as Bad Luck Brian. 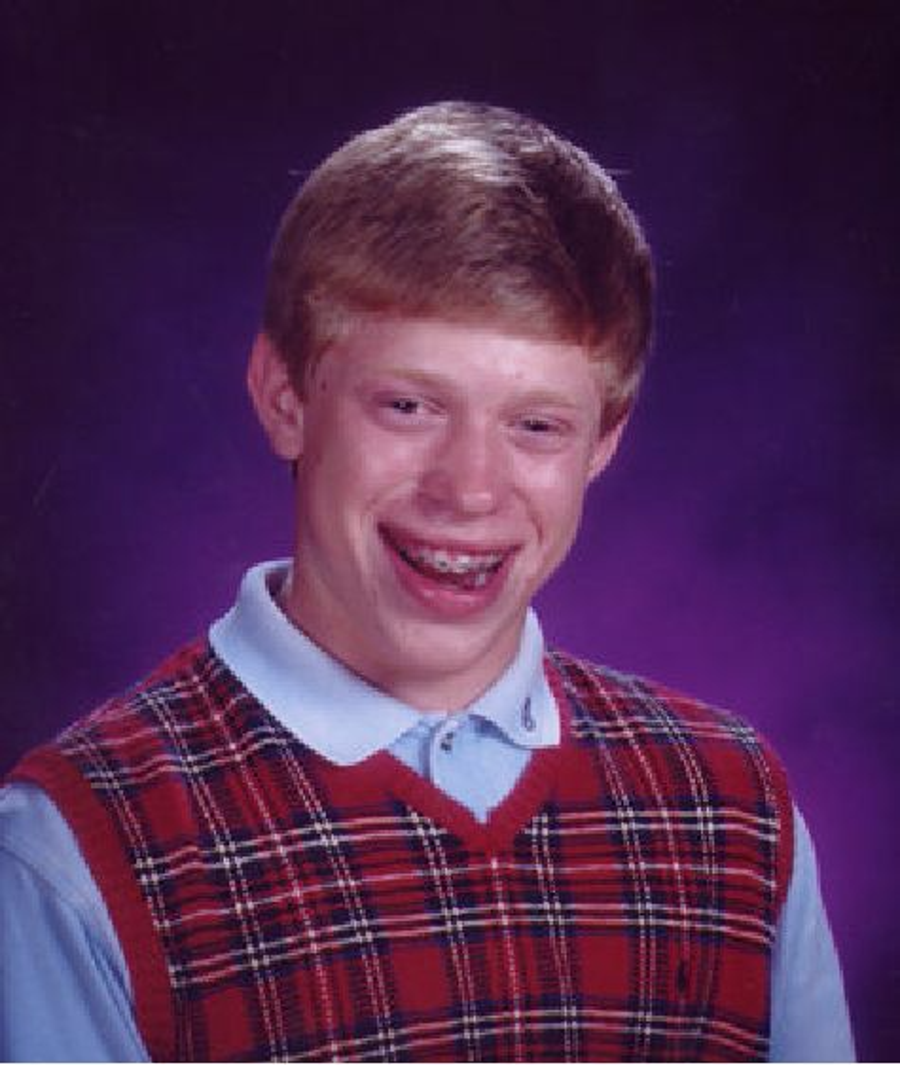 Well, if you like such simple and straightforward humour, then rejoice because the latest series of train breakdowns has allowed Singapore to produce its own version of Bad Luck Brian.

The meme makers from ajc_memehub presents Bad Luck Kuek. After all, you must be pretty suay to have to deal with the large number of breakdowns after volunteering to become the CEO of SMRT. 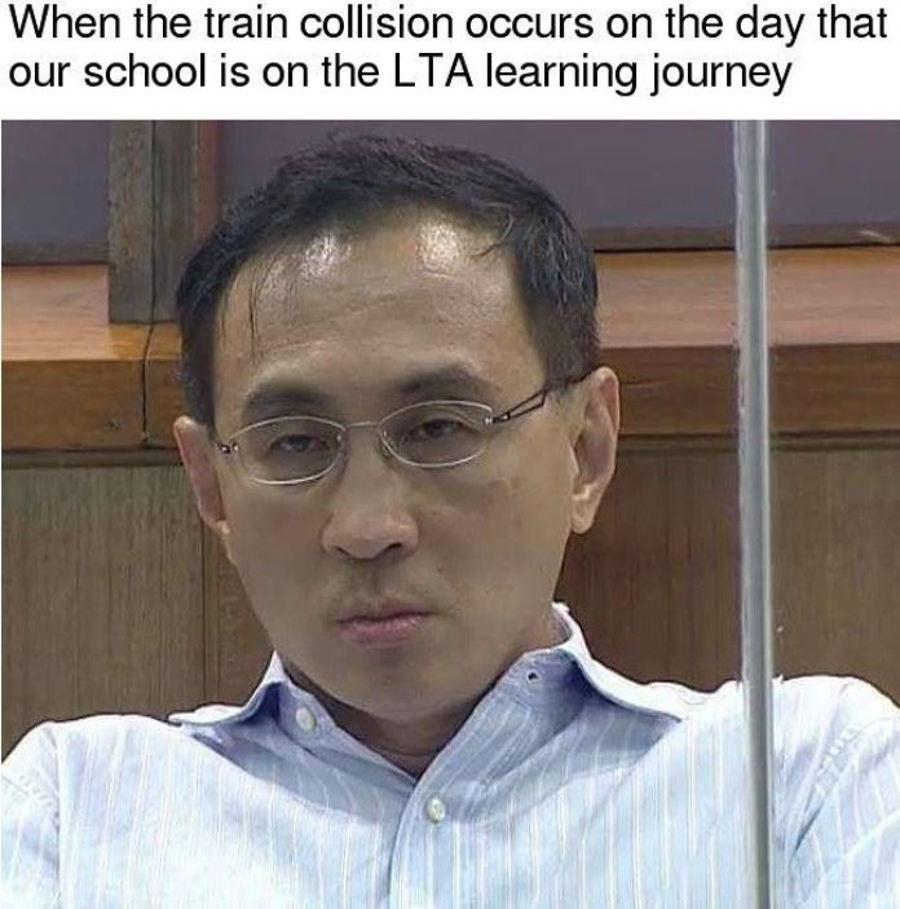 The face of dejection.

If you found the question in the physics meme easy to answer, then here’s a chemistry one for all the smarty pants out there. In this post by the fictitious potongpasirsecondary, the meme calls for those with the knowledge of chemistry to calculate the amount of carbon released into the air after the train collision in Joo Koon. 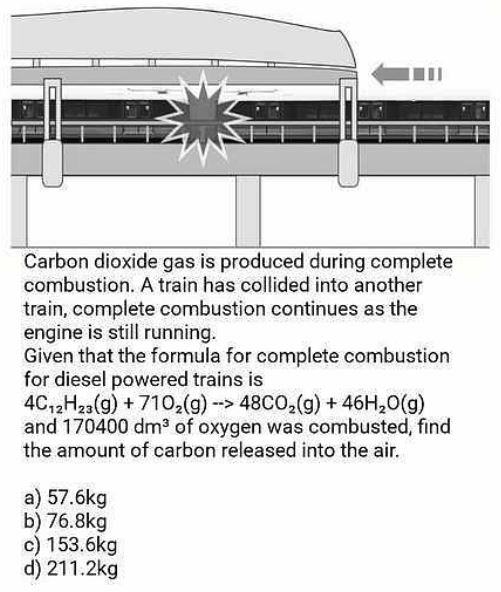 However, like the conscientious student that spots a mistake in an exam paper, we would like to point out that perhaps the meme would have been funnier if it asked netizens to calculate the amount of smokescreen formed as train service providers try to give reasons for why problems continue to occur.

5. Going off the tracks

Here’s where things get a little political. In a post by maristellahighaf, the meme makers reference a very familiar political symbol. 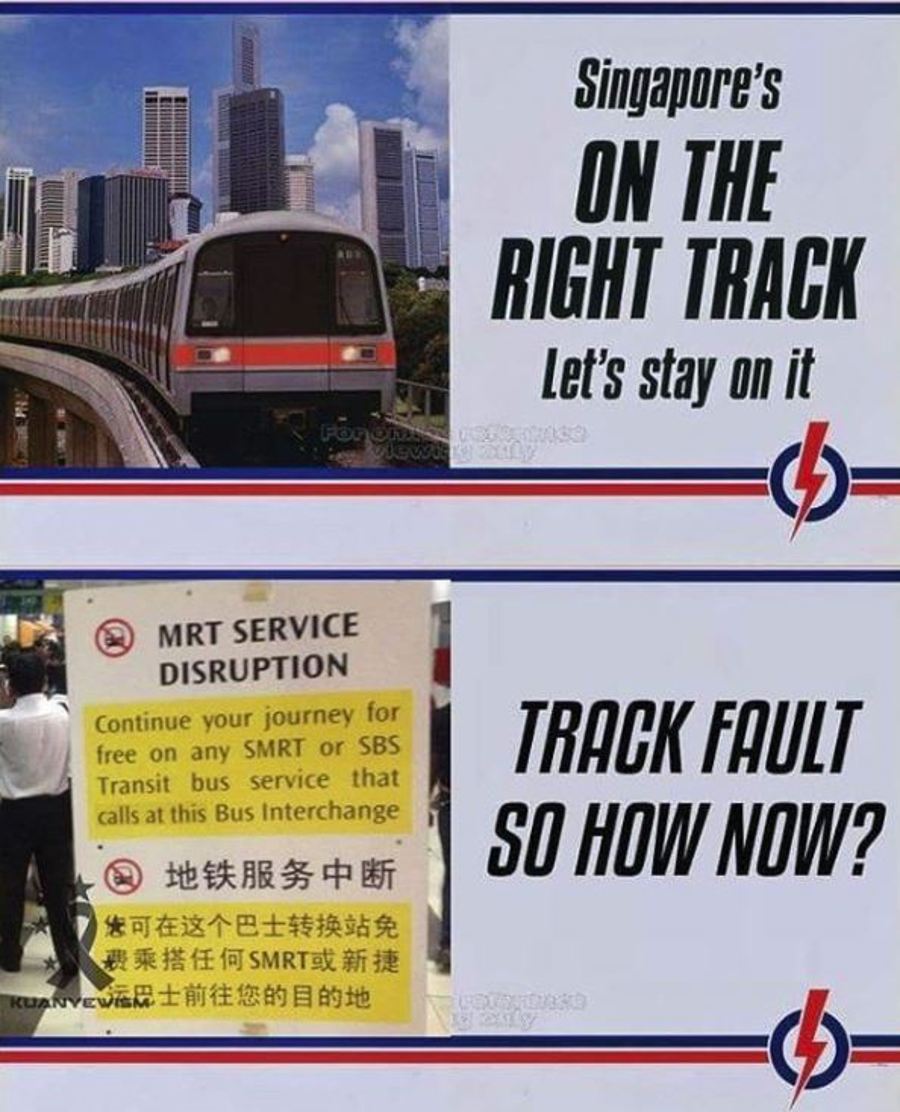 The meme seems to suggest that another organization in Singapore is experiencing difficulties in helping Singaporeans to reach the destination that they want.

6. I volunteer as tribute

Not one to toot our own horn, but not everybody has the digital skills to make memes such as this. 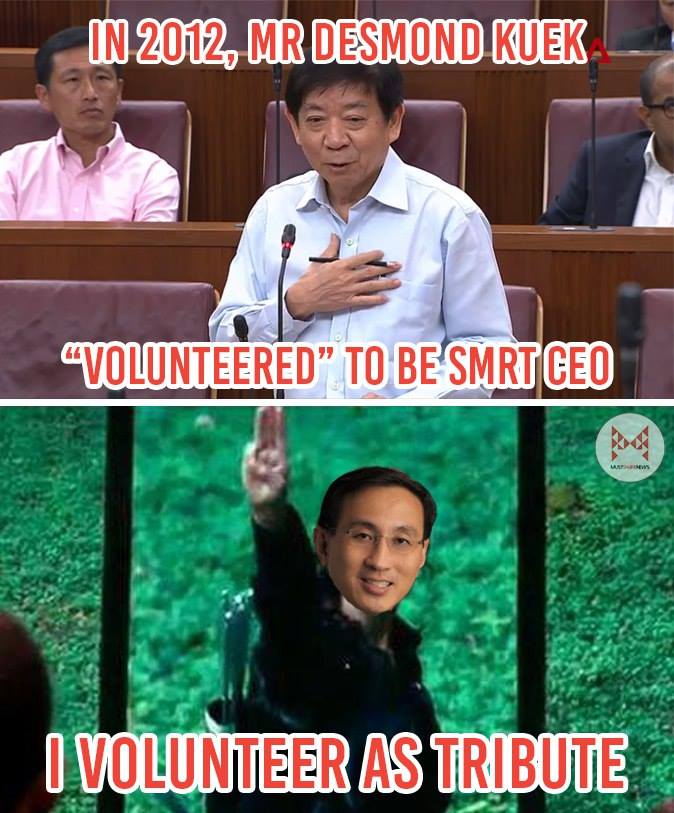 However, that has not stopped this Reddit user from trying to emulate SMRT CEO Desmond Kuek and volunteering to become the company’s next CEO. In his three-point declaration, the Reddit user gave three reasons on why he would make a good SMRT CEO. 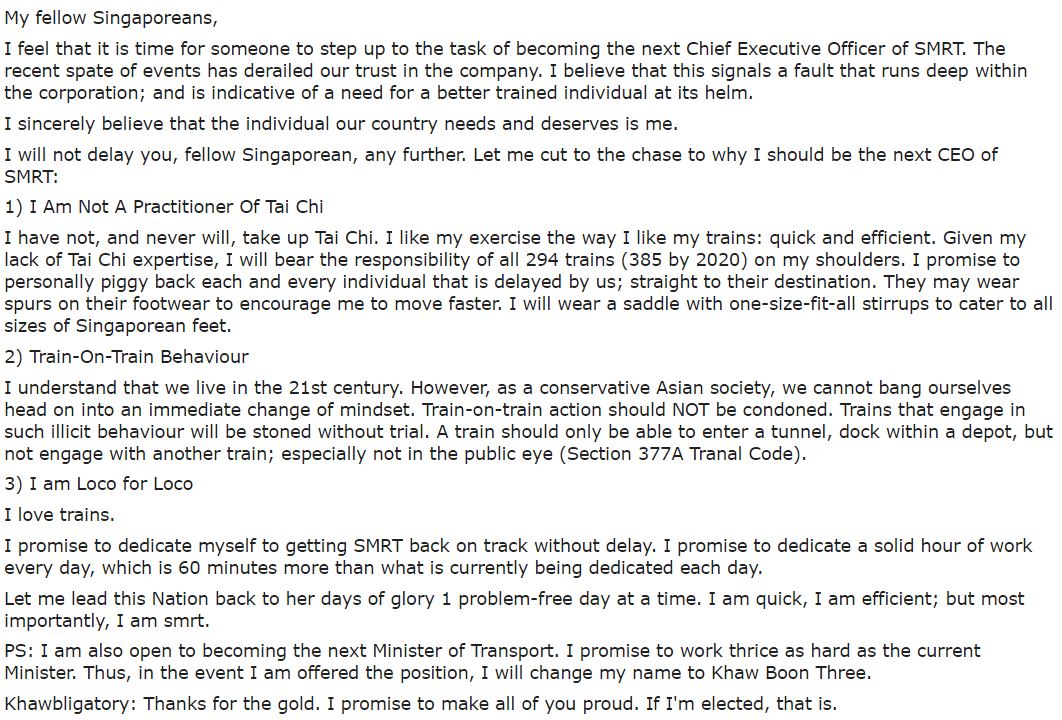 The user argued that has never practised the art of Tai Chi and is willing to punish any train-on-train actions as it violates Section 377A, which makes gay sex illegal. If those aren’t convincing enough, the candidate promises to put in more hours than SMRT has in eradicating train disruptions.

In the event that the user fails to be offered a job in SMRT, he revealed that he would be open to becoming the next Transport Minister. Guess he will be the hero that Singapore needs, but not the ‘wan’ the government wants.

Sick and tired of betting with Singapore Pools only to shred your 4D ticket when the winning numbers are announced? Well, Mediacock Singapore now offers a better opportunity to strike it rich with their MRT Breakdowns betting slip. 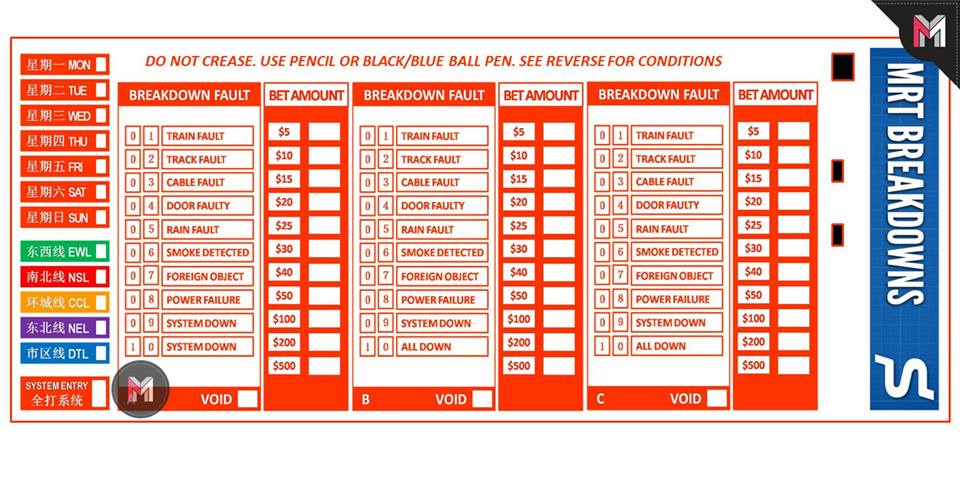 Gamblers can pick the day, the MRT line as well as the reason given for the breakdown fault. In the event that you are unable to decide because all the choices seem probable, we at MustShareNews recommend the system entry which allows a randomization of the options. Huat ah!

8. Thank you for riding on our stress lines

BREAKING NEWS! Train authorities have just announced that a new line will be opened in 2017. The name of this brand new train service? Stress Lines. 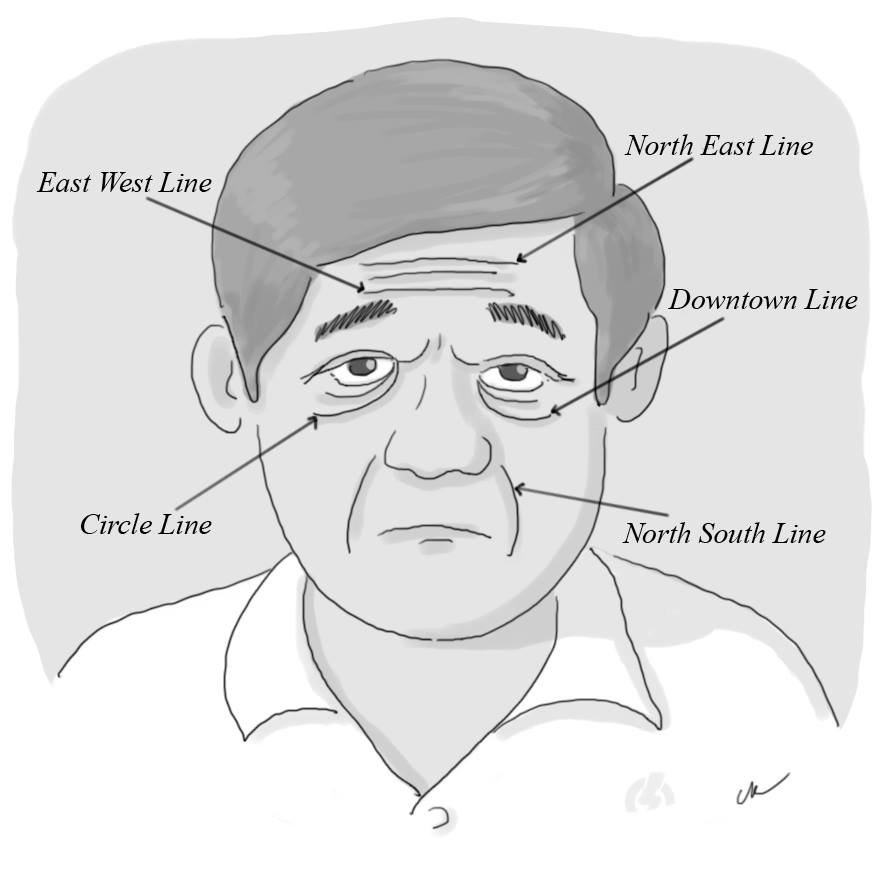 This new service was brought to you by the providers from SemiSerious. Don’t worry, we heard they are quite reliable one.

We all have that one gullible friend who will believe and do anything you say. According to SGAG, this is what will happen when you ask that friend to “Kiss my ass lah!” 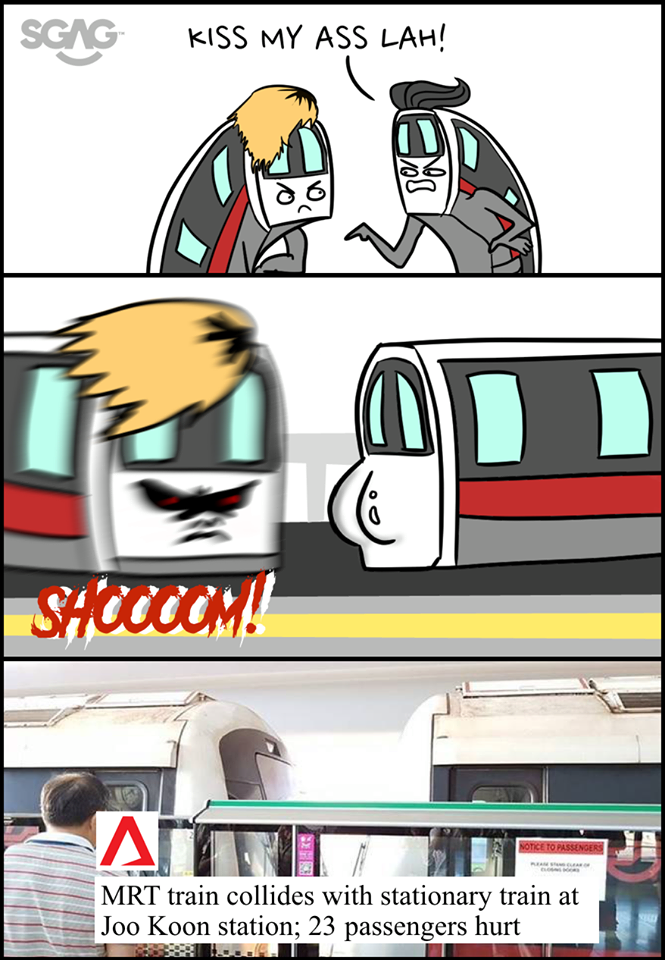 Remember when Netflix Singapore created a Stranger Things trailer for Yishun?  Well, it seems that the company has changed their mind and decided to film the third season of the Nextflix series in Bishan MRT.

We think that the station is an appropriate location given that strange events like flooding have occurred in the tunnels, much to the horror of passengers and SMRT. Very apt indeed.

Bonus: Pikotaro here to save the day

Our train service has proven to be such a huge calamity that Japan has decided to send aid. Here to help us improve train standards so that they become on par with the esteemed Tokyo rail, we have Pikotaro. 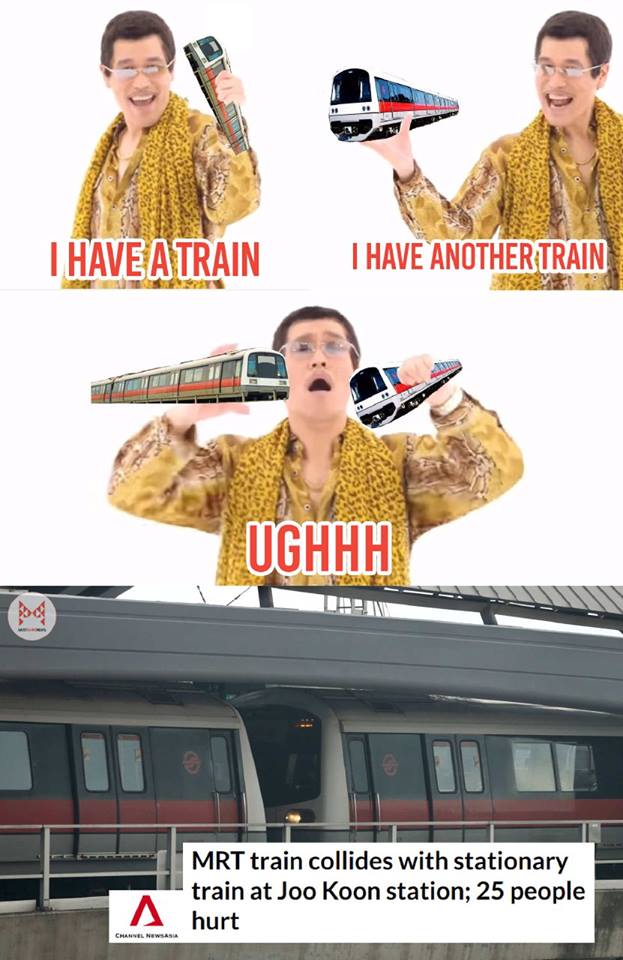 Now before you accuse us of ownself promoting ownself, we would like to say that we learnt this from our leaders.

Don’t know how to feel anymore

We don’t know about you, but we are quite tired of covering and suffering from the numerous train disruptions. Hopefully, this article will help lighten the mood since the disruptions seem to be increasing in frequency.

Remember, if train service gets disrupted once again, read our article and be like this guy.