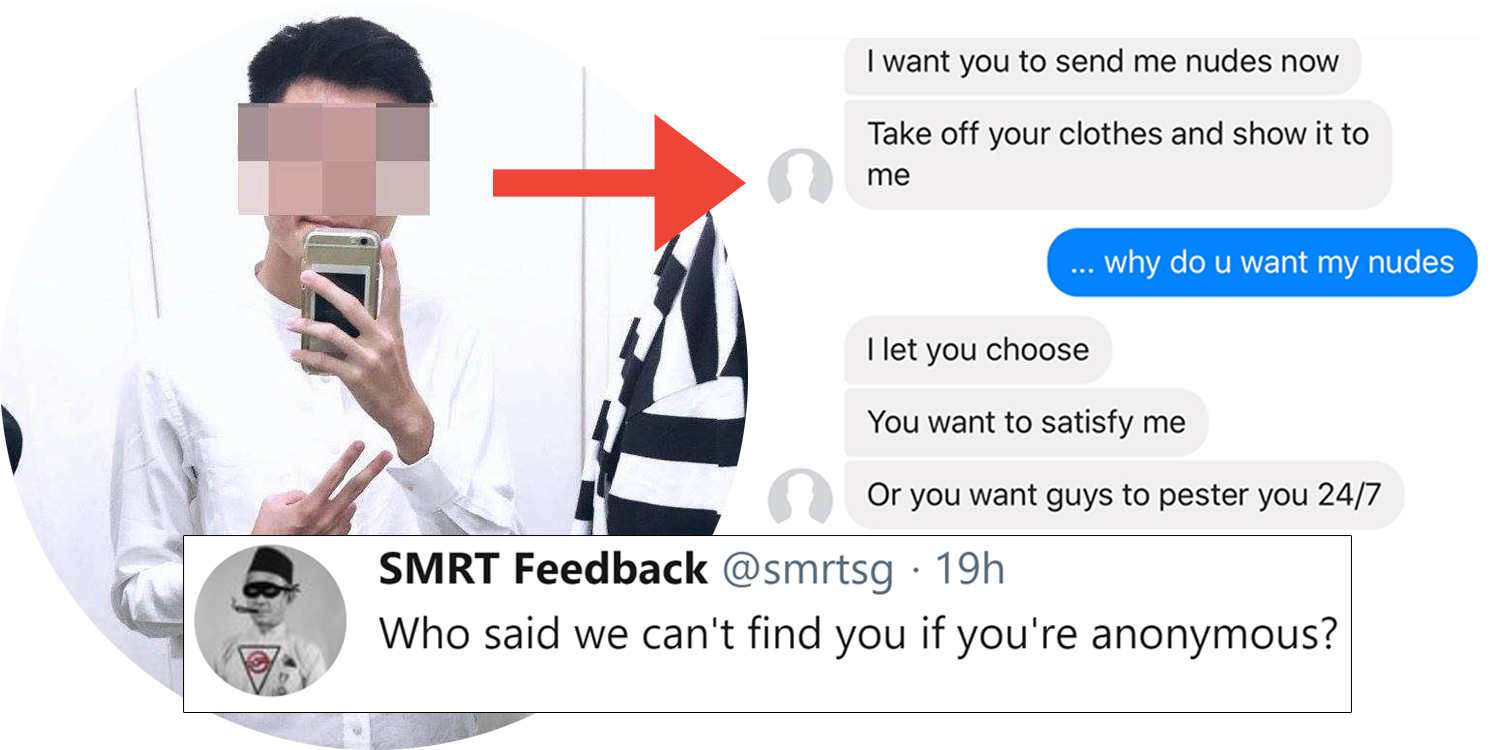 The next time you think of of blackmailing someone for their nude pictures, think again.

Because even if you’re absolutely certain you’ve left no digital trails, someone will still look for you and he will find you — and we’re not talking about Liam Neeson. Once again, vigilante group SMRT Feedback doles out justice in a way only they can by allegedly exposing an anonymous user threatening to release a victim’s sex tape unless she complied by sending over nude pictures of herself.

Proving that even in this day and age of the Internet, there truly is no such thing as anonymous.

Before we proceed, readers are advised to take the following story with a grain of salt as all information presented currently cannot be confirmed to be true.

That being said, let’s move on to some sweet Internet justice.

On Sunday (11 Mar), the Singapore’s self-proclaimed social media badass SMRT Feedback by The Vigilanteh published the following exposé on their Facebook along with an album named “A case of extortion in Singapore“.

According to them, the culprit – aptly nicknamed Tom Dick – claimed to be in possession of his victim’s sex tape, and was harassing her for nudes in exchange for not leaking said tape online.

The album contained screenshots of the conversation seemingly between Mr Tom Dick and the “victim”.

Whether or not the conversation involved the actual victim or SMRT Feedback themselves however, is unclear.

Though according to their Facebook, it was stated that they had “stepped in” to handle the case — so you be the judge on who it actually was.

From here on out, we’ll be referring to both parties simply as the culprit and victim for simplicity sake.

The conversation begins innocently enough — with the culprit breaking the ice and sprinkling a little compliment on the side. 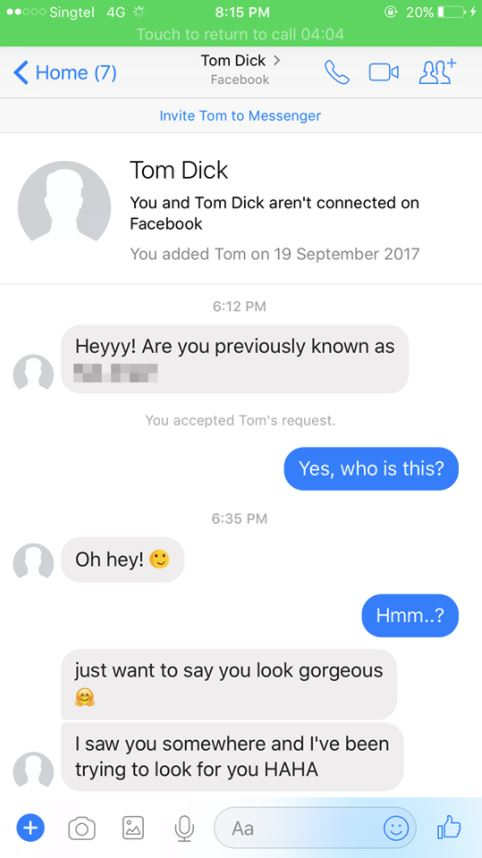 However, it wasn’t long before things took a creepy turn when the culprit revealed his true intentions.

It is believed that between these two screenshots, it was established that he had claimed to be in possession of the victim’s sex tape, and wanted her nude photographs to “trade” in exchange for not leaking it online. At this point though, you might be wondering — why bother asking for one’s nudes when you’ve already got their sex tape?

The culprit even claimed to have been someone the victim rejected in the past, and threatened to upload her video on the following websites:

Thankfully, the victim sensed that something didn’t quite add up and kept up with questioning his identity. The culprit however, was losing his patience. 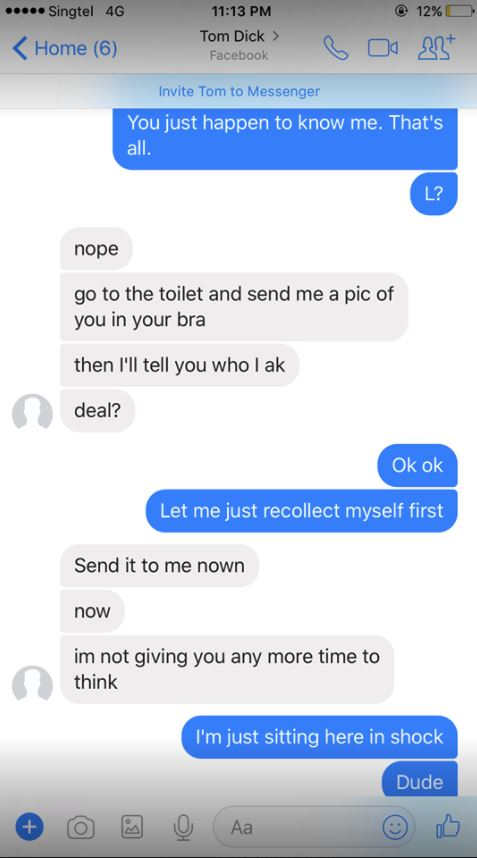 It was at this point after some back and forth where the victim was seemingly able to trick the culprit into disclosing his email address.

Unfortunately, we here at MustShareNews cannot confirm if that was her intentions all along and whether that was how his true identity was – eventually – disclosed.

However, it’s generally a bad idea to give out personal information such as your email address when trying to remain anonymous. 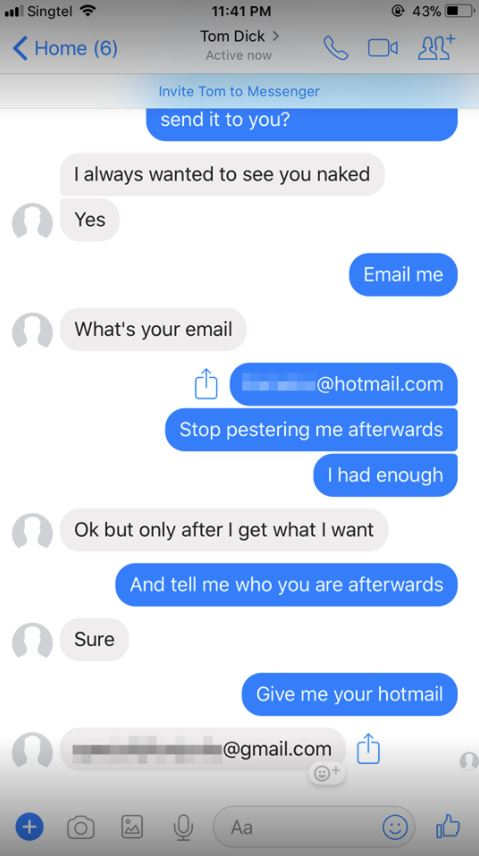 Looking at the timeline of the conversation though, the victim stopped replying shortly after receiving his email.

Perhaps she – or SMRT Feedback – had obtained enough information to either lodge a police report or disclose his true identity. Or both. 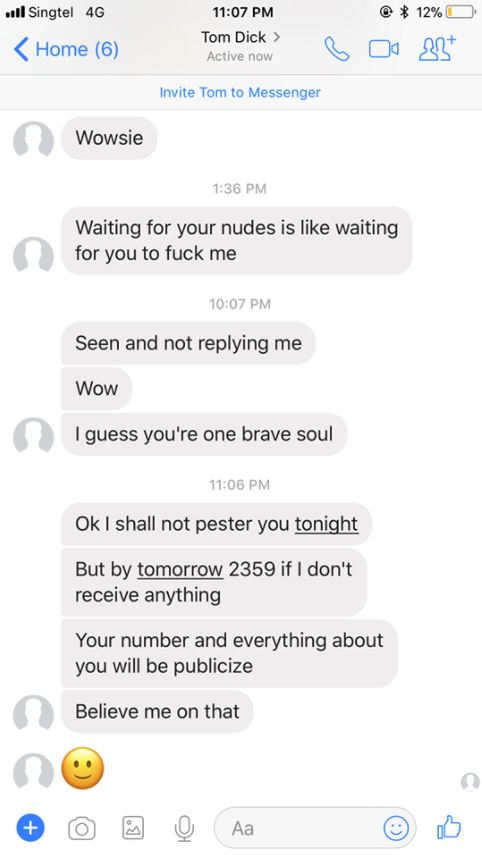 Not suspecting otherwise however, the culprit remained focused and persisted with the harassment. Fortunately in this case, his persistence did not pay off.

Little did he know that the tables had already been turned.

It’s important to note that for the sake of the article, only a select few screenshots of the conversation were used to explain what happened. If you wish you view them all in its entirety, you can do so here.

While we may never truly know how SMRT Feedback obtained the culprit’s personal information, what’s perhaps more important in this case is that they did.

And they gave him an ultimatum.

Mr E – as he’s now referred to – was to surrender himself and his accomplices to Investigation Officer Nicholas at Jurong Police Division by Tuesday (13 Mar) or Saturday (17 Mar).

That is, should his NS Encik not allow him to leave camp premises. Alternatively, he was to inform them that he was ready to provide a statement if IO Nicholas isn’t around.

One can only assume that his face will be publicly revealed should he not comply.

Also interesting enough, the culprit was allegedly revealed to be an NSF currently serving his NS at Stagmont Camp.

If everything that’s been said thus far is true, surely Mr E is done for.

While you may disagree with the way SMRT Feedback takes measures into their own hands, one cannot deny the results that’s been shown.

At the end of the day, what’s most important is that the victim can rest well knowing that her culprit will soon be brought to justice.

Whether or not what they did was morally or even legally correct, is another discussion for another article.

In the meanwhile, why not read about the other times SMRT Feedback got involved with online vigilantism.