If you have been keeping up with what is going on in Sim Lim Square, you would know that the Facebook group SMRT Ltd (Feedback) was responsible for antagonising Jover Chew in real life. The group’s moderators leaked the private particulars of this man and sent large amounts of pizzas to his house. While many supported this group for taking action against Chew, others thought that this sort of vengeance should not be exacted on the man, even if he bullied his customers.

Here’s what netizens had to say about their actions: 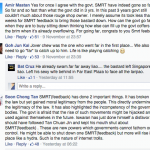 Since then, the moderators of this page have had their Paypal account suspended.

Post by SMRT Ltd (Feedback).
With so much press surrounding the group, we were left wondering why they have decided to mete out their own brand of justice. We get to see the reasons behind their actions in this interview with Vulcan Post.

What are your thoughts on being called a ‘vigilante group’ instead of a ‘satire/troll’ group, since you started mainly to talk about the frequent MRT breakdowns in 2011?

Our thoughts are stoic at the moment, and regardless of how the public and the media paints us, we feel that ultimately, there are deficiencies in the due process of the law, which is why we reluctantly stepped in. We didn’t plan to be involved in any vigilante activities but from Heather Chua, to Anton Casey, and now the SLS saga, no authoritative figure has rise up to take concrete action. We filled that gap.

How do you think online-vigilantism has helped with the Sim Lim Square (SLS) scams?

CASE publishes the number of complaints filed with each errant retailer but as we all know, nothing proactive is being done to nip it at the bud for the past several years.

Online vigilantism comes in when the people we trust to handle the situation becomes incompetent.

The effect we are starting to see is that retailers in SLS now are more wary of their approach. This case is going to be debated in Parliament and the Govt. is finally stepping in to tackle this problem more seriously. Whether or not their solution works remains to be seen.

Do you think what you’re doing constitutes as cyberbullying?

Perhaps. Is it against the law? Maybe.

At the end of the day, we provide a platform to publish publicly available information. What people do with the information is none of our concern.

Whether it’s lawful or not, it does not matter in our books. What we do know is that if you want to fight a dragon, you don’t send a toothless tiger. You send another dragon of the same caliber, regardless if that dragon is in anyway a subscriber to the laws of the land. Sure there will be collateral damage, but it works.

Who Watches The Watchmen?

With that controversial statement, the group has made it pretty clear that they are here to stay as a vigilante group, meting out their own types of “punishments”. Their actions are extreme and worrying, and we are unsure if their deeds are truly justified. Like the collective public, we’re upset with Chew, but we’re wondering if these groups that step in can truly replace the institutions that have dealt with these matters.

With reference to Vulcan Post and SMRT Ltd (Feedback)