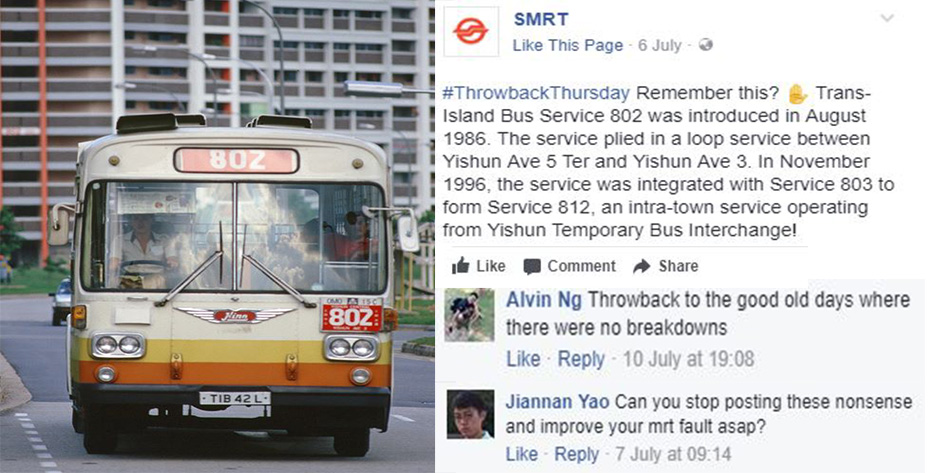 Those who have wives or girlfriends may know the feeling — sometimes you may want to set the mood for some loving by reminiscing with your bae on how you met, how you popped the question, etc. — but the only thing she wants to talk about is how you forgot her birthday this year and always leave the toilet seat up?

SMRT’s media team must feel a little bit like that now, when nothing it can do will make commuters forget about the numerous and repeated train breakdowns that have plagued the network for weeks. And keeping quiet isn’t the answer, either.

Well, the transport operator learnt the hard way that nostalgia isn’t the way to placate commuters when it foolishly thought that taking a trip down memory road would be the best way to ease tensions.

Back To The Future

After all, how do you make people forget such a regular feature of the morning commute, and one which will be so for the foreseeable future?

The latest one was as recently as this morning (Wednesday, July 12):

[EWL]: Due to a track circuit fault, pls add 20 mins travel time from #JooKoon to #Clementi towards #PasirRis. Train service is available.

Since SMRT persists in testing the signalling system during peak hours, perhaps it should instead have shown commuters that they are working to fix the faults, instead of harking back to the past in a possible bid to distract them from the dire situation.

The trip down memory lane received the expected responses from netizens fed up with the breakdowns.

Some did appreciate the nostalgia — especially of the days when there were no train breakdowns.

Some even suggested, perhaps sarcastically, that old buses like the one featured in the post should remain in service. Who knows, they may actually be more reliable than our MRT trains.

And many just decried how SMRT can spare the time to post meaningless posts instead of train fault updates and spending more time fixing the faults.

SMRT Trains chief executive Lee Ling Wee attempted to quell these tensions in a long-overdue post on SMRT’s website on Monday (July 10) that was also reported by Channel NewsAsia.

He explained that if SMRT were to restrict testing the signalling system during non-peak periods, it would take Singapore “years” to rectify the situations.

Mr Lee also claimed that “no two railway are identical in the way they are designed and operated”, and hence the SMRT can’t just replicate the “well-oiled systems of Taipei, Hong Kong and London”.

This inevitably led to SMRT having “no choice” but to test the MRT signalling system throughout the day.

Netizens Aren’t Having It

It seems that nothing short of a complete remedy of the problem would satisfy netizens, most of whom deemed Mr Lee’s explanation as unsatisfactory. 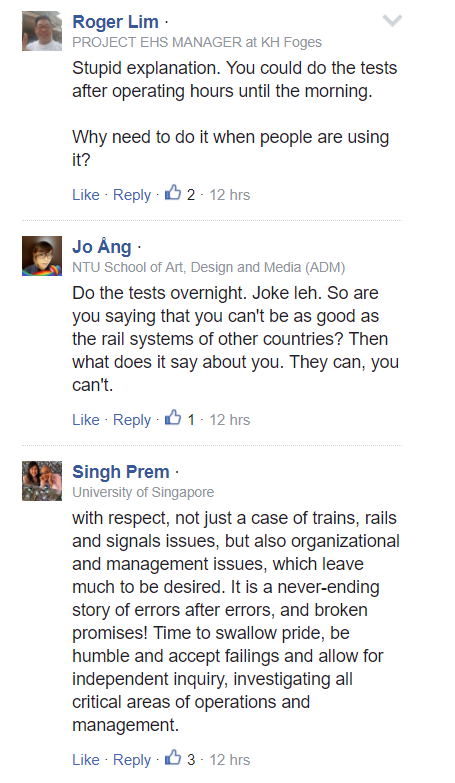 It seems that the only thing that SMRT can do nowadays is raise netizens’ hackles further no matter what they do.

Since it seems incapable of eliminating the train faults in the near future, a hike in train fares better not come soon.