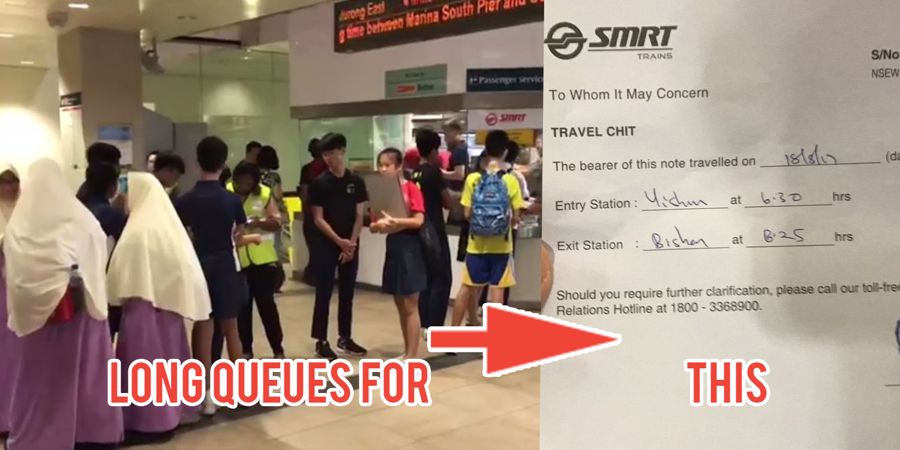 While train faults have become so regular that it happens nearly every other day, the train breakdown on Friday (18 Aug) had more severe implications on a particular group of Singaporeans.

Primary 6 students who were heading to school to take their Primary School Leaving Examinations (PSLE) oral examinations were delayed from reaching school on time after train faults caused delays on the North-South Line (NSL) and the Downtown Line.

The thought of sitting for an examinations is enough to send shivers down the spines of any 12 year old, let alone their first national one.

Parents and teachers often try to calm the exam jitters of these young ones with bottles of Chicken Essence or words of encouragement.

However, it seems that the SMRT’s jitters are worse than the students, after train delays of up to 45 minutes were reported on the North-South Line.

Knowing that Primary 6 students have their PSLE exams today, SMRT issued excuse slips which could be collected at the station’s control center.

Check out the long queue below.

Why Never Leave For School Earlier

In light of the importance of the PSLE, some pro SMRT supporters (if there are any left) would argue that students should have taken into account the unreliability of our train system and left earlier for school.

One passenger heading to Bishan took into account that a breakdown could occur and boarded a train at Yishun station at 6.30am.

For those that are unfamiliar with the NSL, Bishan is 4 stops away from Yishun would probably take 15-20mins.

That would mean that this passenger would reach Bishan MRT at approximately 6.50am.

Take a look at this travel chit below we got from the internet.

A commute that was supposed to take only 20 mins long became a nearly 2 hour long journey.

Implications on the children

With students already having to deal with the huge pressure to do well in the PSLE, SMRT’s latest train fault certainly did the students no favours.

Some Singaporeans were concerned that the fear of being late for a such a hyped up national examination would prove too much for a 12 year old to handle.

After learning about the delays, the Ministry of Education assured parents and students that arrangements will be made for students affected by the train faults.

With the a slew of major examinations coming up in the next few months, SMRT had better sort out their technical issues, or Singaporean parents will be calling for harakiri.