This is why we have to read the affidavit properly

Most will have known about blogger Xiaxue getting a Protection Order against an anonymous entity known only as SMRT Ltd (Feedback). If you’ve been living under a rock, we’ve covered that here.

In response to the affidavit served against them, SMRT Ltd (Feedback) posted a status update stating they had to reveal their identities by 12pm on 7 February.

Turns out they were just trolling everyone. 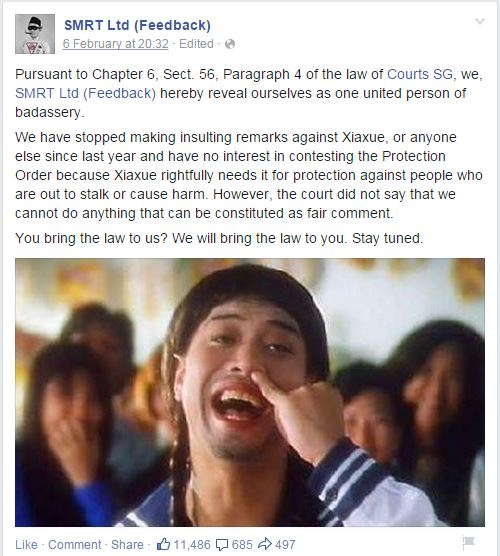 What’s actually in the affidavit

In the affidavit, the party served with the Order is “SMRT Limited (Feedback)”, and the order was that they (as an entity) are not to “make insulting or abusive communication” about Xiaxue, her husband, or her son.

If SMRT Limited (Feedback) disobeys the order, they will be liable for violation of Section 10 of the Protection from Harassment Act, which carries a fine not exceeding $5,000 or a jail term of six months or less, or both.

The court order does not require SMRT Limited (Feedback) to reveal their identities or make an apology. Boy, they sure had everyone fooled.

They have responded that they will not contest the order because according to them, they have not made insulting comments about Xiaxue since last year.

Apparently, the order does not prevent them from making sarcastic remarks or continuing to post what they may term as satirical posts, as discussed in their disclaimer.

The people at SMRT Ltd (Feedback) have also been talking of being in Kazakhstan (for some volunteer work), trekking, and posting weird status updates about men on horseback and eagles. Sounds like they’ve really found themselves. Whatever that’s supposed to mean. 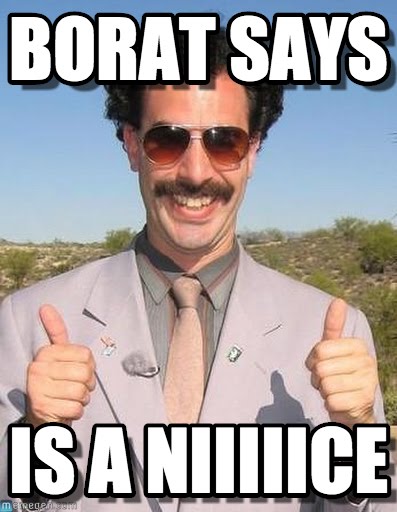 The battle’s won — for now

Xiaxue doesn’t want to take crap from anonymous people whom she cannot call names back because, well, they’re anonymous. What is she gonna retort with? “You’re sitting behind a computer screen, loser”?

That’s exactly what she did. Didn’t sound particularly insulting.

Since she can’t get them to reveal their identities, she had to do the next best thing: stop them from insulting her with the law. 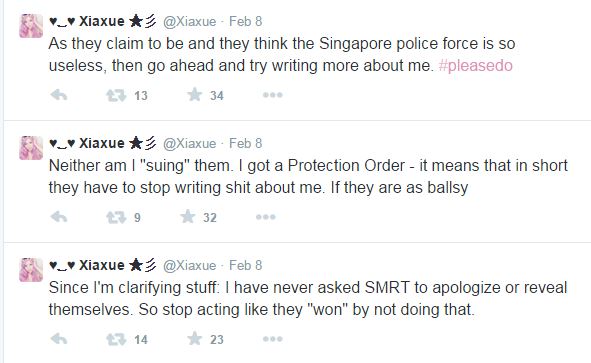 Xiaxue also wants protection from people who directly or indirectly use the SMRT Feedback page to harass her. Fair enough. Although we wonder why the other harassers aren’t subjected to this court order.

She may have “won” a battle, but SMRT Limited (Feedback)’s popularity or anonymity aren’t going away anytime soon, it seems.

Nobody knows what the still-anonymous entity will do next, and a Protection Order appears merely a small stumbling block for the self-styled “vigilantehs”.

Meanwhile, Singaporeans sit around with their keyboards, awaiting the next drama or controversy. 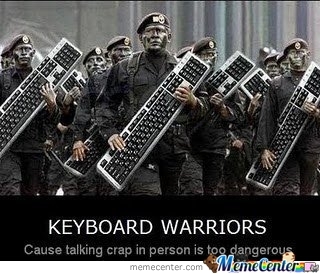