Must Share News – Independent News For Singaporeans
Home News 5 Questions SMRT Must Answer ASAP, Including: Is There Something Wrong With... 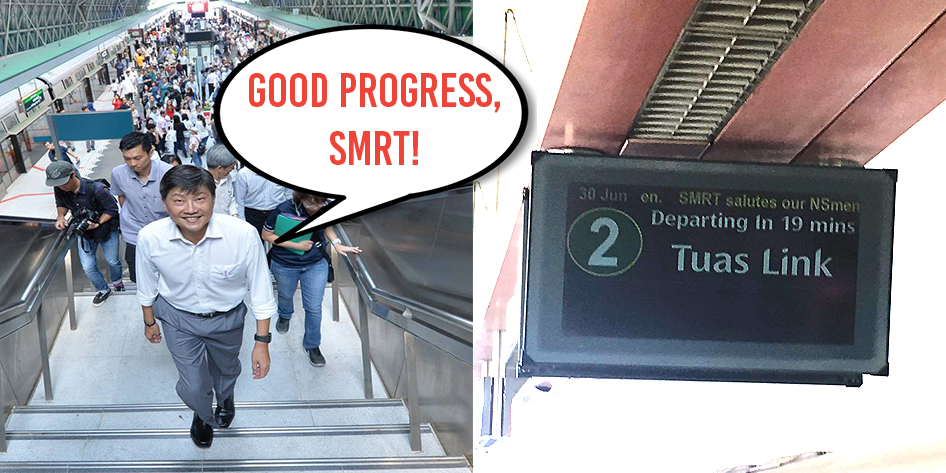 Today (June 30) is Free Travel Day for all NSmen, in commemoration of 50 years of national service. Servicemen just have to wear their uniform to get free travel on buses and trains.

However, they might not want to board the MRT even if it’s free, as our beleaguered train service slowed down yet again this morning, according to media reports and SMRT’s Twitter account:

What’s the point of commemorating NS50 with free transport for NSmen when the transport itself doesn’t work properly?

It’s like giving a pair of old sneakers with holes in it to charity.

Happy #ns50, @SMRT_Singapore. Why are you people still getting paid is beyond me. pic.twitter.com/T0uVk3JFrI

Seriously, u nv fail to disappoint every single day. CCK to JE moving at the pace of a snail. Oh, i think snails are faster

Days And Days Of Disruptions

A Way Of Life

By now, it’s already a way of life in Singapore — but it shouldn’t be so.

It has been one month since SMRT began testing a new signalling system on the NSL during peak hours. While the “intensive” tests were supposed to iron out kinks and ultimately reduce travelling time for commuters, things haven’t exactly been smooth sailing.

I'm leaving #rafflesplace #mrt because no one's budged in 10mins. Things can only get worse. #singapore #fail pic.twitter.com/eNeTnz6g8N

sembawang right now with no trains both ways pic.twitter.com/sA7e1pgVuW

Earlier this month, the slew of disruptions proved too much even for the SMRT Twitter account, which also underwent a breakdown of its own by staying silent over 4 days amid continued reports of breakdowns from commuters.

And if the social media posts are anything to go by, the situation has actually gotten far worse.

Trapped in train, get a free ride #sadinsingapore #mrt pic.twitter.com/hacg9lc0b7

In light of the recent spate of major disruptions, we crafted 5 urgent questions for the SMRT management to answer.

1. Is there something wrong with the Tuas West Extension?

The East-West Line (EWL) had already been showing signs of trouble over the past month:

Just one day after its opening, complaints started flooding in as commuters reported significant delays in their journeys on the EWL.

@SMRT_Singapore Have you guys tried taking from Clementi to Jurong itself ? It takes more than 10min for a stop. Wake up your mind

@SMRT_Singapore You sure have many people to apologise to thanks to your train fault and additional 30min journeys. pic.twitter.com/SPR7N6BNw1

While the delays could be attributed to the new signalling system (more on that below), a train enthusiast noted on Reddit that an incompatibility with the new Communication-Based Train Control (CBTC) could be to blame as well.

It seems (the authorities) may be rash in choosing to deploy relatively untested technologies into the system considerably ahead of time.

I believe LTA does have their reasons. First, the urgency to open the Tuas West Extension, which should have been opened last year. Second, the new C151Bs (white trains). Both these projects are only equipped with the new CBTC system (“CBTC” in short), and it would be important to have test coverage on the system to ensure the most can be made out of these new improvements.

Under the current arrangements, all trains must switch at Pioneer station into CBTC territory, even if they are not continuing into Tuas. This is because the turnback siding east of Joo Koon station is located in CBTC-only territory, and it cannot be entered under the old Westinghouse Fixed Block system. This causes delays while trains have to ‘reboot’ into the new system, which takes about one or two minutes.

This would explain why Pioneer was one of the worst-hit stations during the delays.

It’ll be great if SMRT could also clarify whether the delay will be permanent, since the rest of the stations beyond Boon Lay and the Tuas West Extension aren’t compatible with the CBTC system.

Priority still has to be given to addressing the hour-long delays stemming from its new signalling system, which are considerably less tolerable than waiting a minute or two for the train to reboot.

After all, the opening of the extension was already delayed by nearly half a year “due to the need for more reliability tests and fine tuning”. Further glitches will only mean more overtime for its PR officers.

Oh, and by the way, at the opening ceremony on of the Tuas West Extension on June 16, Second Minister for Transport Ng Chee Meng said our MRT trains were making “good progress” in reliability, reported The Straits Times. Talk about tempting fate.

2. Why were commuters not informed about potential breakdowns along the EWL?

According to the Land Transport Authority (LTA), the extension is using the same, new signalling system currently being tested on the NSL.

You know, the one that has crippled the NSL for close to a month now?

As a matter of fact, both SMRT and the LTA have warned commuters to expect more delays as they require a “few more months” to fine-tune the system.

This leads us to wonder, if both the NSL and EWL were going to be using the same system, why did SMRT only warn us of potential disruptions on the former?

Furthermore, the Tuas West Extension was formally opened on June 18, nearly two weeks after SMRT commenced full-day testing on the new signalling system. Considering the “teething” problems that have since plagued the NSL and their failure to fix them, shouldn’t SMRT at least issue an advisory warning commuters on the EWL?

3. Why do most disruptions go unreported on the SMRT Twitter page?

MustShareNews has previously documented SMRT’s reluctance to update commuters on their service disruptions along the NSL.

We were also the first to report on the string of failures on the EWL prior to the catastrophic breakdown on June 28. Only one of those incidents was reported by SMRT on Twitter.

The deafening silence is worrying. When two of Singapore’s most important MRT lines are breaking down on a daily basis, staying quiet about the situation doesn’t exactly inspire confidence among commuters.

To further illustrate our case, netizens had to refer to online news sites to discover that service had been disrupted along the NSL due to a track fault — SMRT did not inform netizens about the delay on its Twitter.

If minor hiccups and ‘mid-tier’ delays are going to be brushed aside, perhaps SMRT could clarify its criteria on what it deems a major incident? How dire must a disruption be before it gets reported?

Let’s not also forget that SMRT’s Twitter page serves another purpose — it’s used as an impromptu excuse letter. If workers and students are caught in an undocumented delay, how will they be able to explain their lateness?

4. Is there an easier way to get an excuse slip in the event of a breakdown?

Speaking of excuses, affected commuters can request for an excuse slip in the event of a disruption:

@SMRT_Singapore you should also let those affected know that they can get refund and the free voucher #SMRT pic.twitter.com/NEoge3wR74

However, getting the excuse slip itself may make you even later than you already are:

Not only the fact that it delays, when I want to get late slip, the queue is horrible, it could even cause me to miss next lesson too. pic.twitter.com/xqAKvAnWOh

I mean, one could always film the entirety of their journey on the train as proof for their school or employers, but surely a more practical solution can be afforded?

An excuse slip-dispensing machine, perhaps?5. What happens if the signalling tests continue to fail?

As mentioned earlier, tests on the new signalling systems are expected to go on for a couple more months.

If that isn’t frustrating enough, no definite end date was provided.

In other words, no one knows when this nightmare is going to end.

Without a specific date to look forward to, we have to start asking some inconvenient questions.

Does the open-ended deadline hint at the possibility of SMRT not being able to stabilise the system within a specific timeframe? Is the train operator anticipating new issues cropping up that might derail their progress?

What happens if things fail to improve after a “few more months”? Will commuters receive refunds for being unwilling participants in a disastrous experiment? Will SMRT reschedule the tests to weekends or off-peak hours to start limiting the damage?

Most importantly, will success be guaranteed, validating the sacrifice of the time of hundreds and thousands of Singaporeans?

In a blog post explaining the rationale behind full-day testing, SMRT stated that there are inadequate engineering hours for them to tun the tests during weekdays. The June school holidays are the “best opportunities” to perform those checks, it added.

Now that the school holidays are over, the trains will be shouldering even greater loads while contending with signalling faults along the NSL and EWL.

It just so happens, by the way, that they are also 2 of Singapore’s busiest lines in terms of passenger load — talk about pushing things to the limit.

Given that there’s no end in sight, we expect SMRT to address the concerns of their commuters sooner rather than later. The lack of transparency thus far is troubling, and we hope the organisation will be a little forthcoming with their struggles and update us with solutions in the near future.

Of course, we can expect that instead of that, the authorities will instead release yet another satisfaction survey like the one released in February that said commuter satisfaction had risen to 96.4%. Predictably, the trains slowed down the next day.

If all else fails, perhaps setting up a secret ministerial committee might do the trick?

In the meantime, someone has started a tongue-in-cheek petition to honour SMRT in the Guinness Book of Records for the highest number of train delays in a year. It has already garnered 427 signatures.