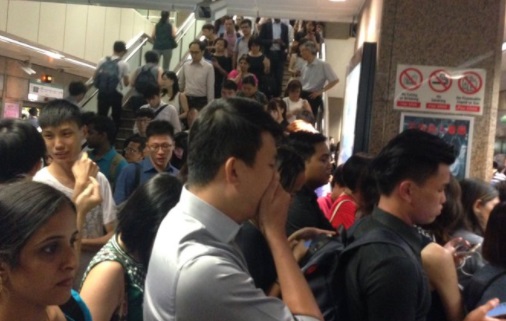 SMRT warned us about the delays on its North-South Line (NSL) in late May, but commuters using the East-West Line (EWL) should be worried as well.

The latter had endured an assortment of faults and disruptions over the past two weeks, but only one was reported by SMRT on their Twitter page.

This morning (June 28), it suffered its biggest breakdown yet.

According to Twitter, Pioneer station seemed to be the most affected.

The platforms were so crowded, queues were seen forming outside the stations.

@SMRT_Singapore You sure have many people to apologise to thanks to your train fault and additional 30min journeys. pic.twitter.com/SPR7N6BNw1

This delay was not mentioned by SMRT.

A track fault later occurred in the evening, crippling services on the newly-opened Tuas West extension.

Train service was temporarily halted across the entire NSL as well, following a “signalling fault”.

MustShareNews had earlier highlighted the SMRT Twitter page’s inactivity during the first week of trials for the new signalling system, and unfortunately their social media team doesn’t seem to have upped their game.

The latest catalogue of delays raises concerns about the EWL as commuters were not informed of any signalling tests, track repairs or replacement works. Since June 12, the delays have progressively worsened.

Here’s a recap of the latest incidents.

SMRT was already facing the wrath of commuters caught in the morning delays on the NSL.

Just moments earlier, an emergency button was activated after a lady complained she was feeling unwell.

Train is stuck for abt 10 mins at Bukit Gombak towards Jurong East. Announcement said emergency button was pressed on train ahead. #smrt

It’s bad enough having to drag yourself to work after a weekend – the last thing anyone wants is to be stuck in a congested space while the train crawled along at a snail’s pace.

But SMRT’s day – and month – was about to get worse as service on the EWL started showing signs of trouble.

At buona vista station. Apparently there is train fault but no announcement was made by #smrt . The platform is now jamned with commuters

Average train waiting time is 7 minutes!! But #smrt didn't inform on the delay

Thanks for adding AT LEAST 30mins to my travel time home, @SMRT_Singapore . And YES I'M STILL ON YOUR DAMN STOPPED TRAIN!!!

They say hindsight is 20/20, and in retrospect, perhaps The Straits Times shouldn’t have jinxed the situation.

Definitely not an ideal start to the week for SMRT.

While service along the NSL improved, problems with the EWL persisted.

Good luck to you @SMRT_Singapore for your 'signaling checks' pic.twitter.com/JtTapjhV89

Stations were unusually crowded and the disruption wasn’t limited to a particular portion of the line – delays were reported near both the Jurong and Pasir Ris stations.

It's so crowded, people are standing at the stairs instead. @SMRT_Singapore pic.twitter.com/3vK3yccKJe

Decided to bounce from Pasir Ris after seeing the crowd at Tampines, but the train has stopped on its way to Pasir Ris. Out-SMRTed.

Some felt these errors could be attributed to the recent extension of the EWL:

A frustrated commuter came up with some ideas to make the breakdowns more bearable. Always happen @SMRT_Singapore when u have new lines out, can u go hk n see how fast is their train n how slow is ours😑 pic.twitter.com/Cd5PLJCWS4

Is this a signalling fault as I am on a C151B set no. 651-652 and there are a few trains behind me waiting and not moving. pic.twitter.com/vylZJNvPkn

@SMRT_Singapore train is not moving at all. Stuck between lakeside and Boon Lay for more than 15mins now.

It was so bad, SMRT finally felt compelled to post an update about the situation on Twitter.

Some netizens regretted their decision to take the train.

Others exploited the situation.

when you late but your boss also the same. actually train is okay, but i stalled in my sleep HAHAHA pic.twitter.com/YydjY6pH90

One summed up our frustrations succinctly.

And you can always count on Mother Nature to rub some salt into your wound.

Normal service seemed to have resumed on the EWL. Those on the NSL, however, weren’t so lucky.

The EWL was still struggling.

Zzz. Still having train delay in between JE to JOOKOON STATION…

@SMRT_Singapore Have you guys tried taking from Clementi to Jurong itself ? It takes more than 10min for a stop. Wake up your mind

Netizens began to voice their concerns over the new Tuas West extension.

Some netizens took to sarcasm to cope.

Good, now we can have more smelly trains!

And this is why my journey is extended by almost 20min today. Thanks. I help you make announcement since you don't wanna.

Besides some minor hiccups, nothing significant happened along the EWL. A major signalling fault did, however, paralyse the NSL.

No train service from TPY all the way down. Way to go @SMRT_Singapore

@SMRT_Singapore why are you not moving in city hall. We don't have time for your breakdown at peak hour.

A somewhat positive story did emerge from the mess.

Train stopped abruptly.
I accidentally bumped into someone.
Or so I thought.

I just apologised out loud to the train pole. LOL great start

You know, the usual happened.

@SMRT_Singapore can u freaking do your train fault announcement for pionner area????!!!! So that I can show my boss! Are u paying me?!

Dear @SMRT_Singapore , I understand you are doing signalling stuff. But taking 10mins from pioneer to boon lay is too much. We need to work!

One commuter wasn’t aware of what was going on around her.

LOL the train stopped moving for about 5mins before this woman realises and goes "wait what's happening, we're stuck"

Another started thinking there might be a conspiracy going on.

@SMRT_Singapore kept quiet abt train disruption tdy as it "only slowed dwn train arrival". We should all call @LTAsg to lodge a report.

A “faith-in-humanity-restored” moment did happen at City Hall station though.

SMRT’s luck didn’t change during the weekends. Several netizens noted delays on the EWL during the evening peak hours.

Been waiting at Lakeside MRT station for more than 12 minutes. No train towards pasir ris.

Bodoh sia stood in the train for 15 mins then they announced the shit. Idiot. Now they say got delay what shit la

Are things going to get worse?

Train fault at NSL. But there's a distinct difference this time. All the passengers were so damn calm and like, oh another day in SG.

In a report by TODAY Online, SMRT and the Land Transport Authority (LTA) revealed that signalling tests might continue for a “few more months”. While no definite end date has been announced, the two organisations are warning commuters to expect more delays.

“Intensive performance checks” will be conducted and additional software will be deployed to stabilise the new signalling system. According to the joint statement, teething issues like the alignment of train doors and the regulation of train frequency have been ironed out.

No mention of the EWL was made.

With the NSL experiencing frequent delays, Singapore cannot afford another faulty line, especially one that connects its citizens from one end of the island to another.

Is a new signalling system being tested on the EWL that the public isn’t aware of? Is there something not quite ready with the Tuas West extension?

The deafening silence from SMRT only leaves commuters with more questions.