Must Share News – Independent News For Singaporeans
Home Current Affairs Unaccomplished Dreams: One Deceased SMRT Staff Was About To Get Married, The... 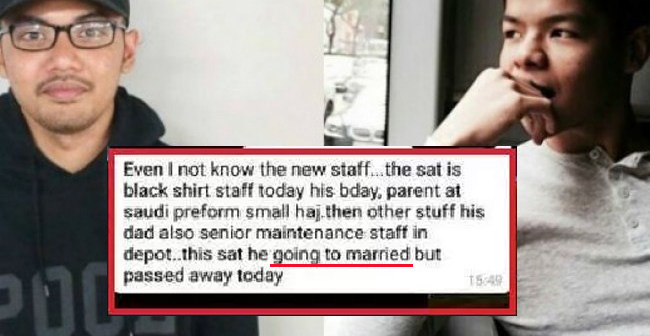 SMRT staff Mr Muhammad Asyraf Ahmad Buhari, 24 and Mr Nasrulhudin Najumudin, 26, were killed yesterday (22 Mar) in a train accident as they were checking a signalling equipment.

They were walking on a path alongside the track with 15 other workers and a supervisor. In a twist of fate, an oncoming train crashed onto Asyraf and Nasrul and they were pronounced dead.

The unexpected death put a stop to all of their future plans, leaving all their friends and family members to grieve over their absence. One of the deceased’s relative also penned an open letter to SMRT, questioning if they would take responsibility.

Nasrul was about to get married this Saturday

On Facebook, circulating screenshots of a conversation revealed that Nasrul was about to get married this Saturday. 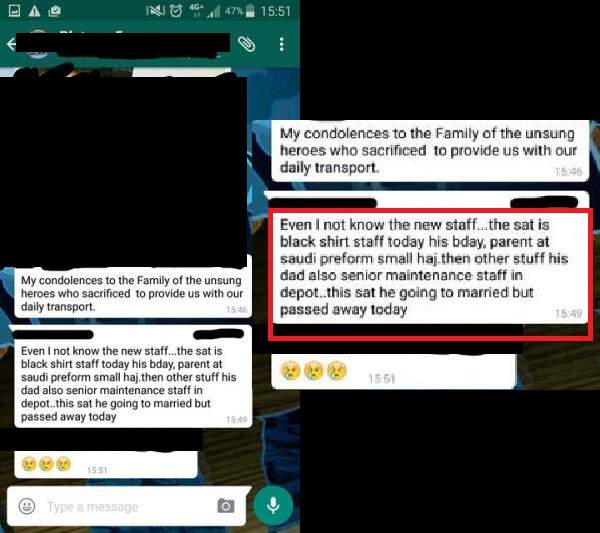 Tragically, this incident has cost Nasrul and his fiancee a lifetime of happiness.

According to Today, Nasrul had planned to get a degree in the future as well. Unfortunately, his plans for the future will never materialise.

Asyraf had planned a trip to KL with his friends, but backed out due to job training

Asyraf and his group of close friends were supposed to go on a trip to Kuala Lumpur (KL) on Good Friday this long weekend but later pulled out from the trip due to his SMRT training.

According to The Straits Times, one of Asyraf’s friends, Mr Muhammad Noorfitri said:

Our group of friends from ITE – seven of us – had planned to go to Kuala Lumpur on Good Friday. But suddenly in February, Asyraf said he couldn’t make it because he had training at SMRT.

Even though he couldn’t make it for the trip, he still gave recommendations and advised us that the best way to go was by train or bus. We never thought those would be his last words to us.

When his friends learnt about the accident, Mr Noorfitri sent a message to a WhatsApp group chat asking Asyraf about the identity of the victim in a text that read: ‘Acap (Asyraf), the one at Pasir Ris is it Malay, Chinese or Indian?’.

But they never received a reply.

His friends were in denial at first because Asyraf is a common name. Perhaps it was just another person with the same name who had an accident.

However, when they saw the condolences on Asyraf’s Facebook page, they knew it was their friend who was the unfortunate one that day.

Loved ones left behind

Nasrul and Asyraf’s sudden deaths left many of their friends and family members devastated.

Some of them took to Facebook to give their condolences. 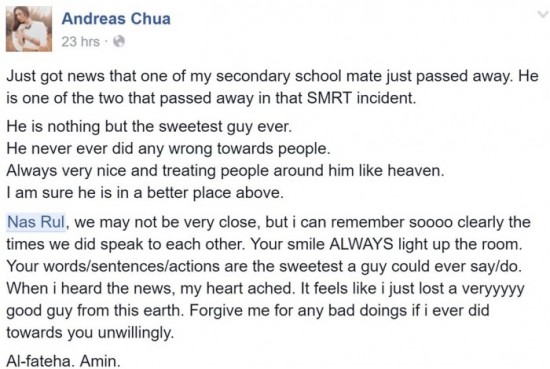 At Asyraf’s funeral today, one of his friends, Mr Muhammad Hasif Bin Mohamad Noor said that “He (Asyraf) always creates that joyfulness within us”, as reported by Today.

Asyraf’s parents is currently at Saudi Arabia on a pilgrimage in Mecca and they will only reach Singapore this Wednesday afternoon at 2pm.

After proper training and safety brief, it is all right for them to access the track.

Some ministers, including Prime Minister Lee Hsien Loong, addressed the issue and will be looking into the matter.

Transport Minister Khaw Boon Wan also expressed his condolences, but unfortunately drew flak for unnecessarily highlighting Downtown Line’s “milestone of 150 days without any major service disruption” instead of solely dedicating a post for the deceased. Talk about tact.

Although it is too late to do anything now since the dead cannot be revived, relevant authorities should investigate the matter throughly and implement stricter safety regulations to prevent such tragedies from happening in the future.