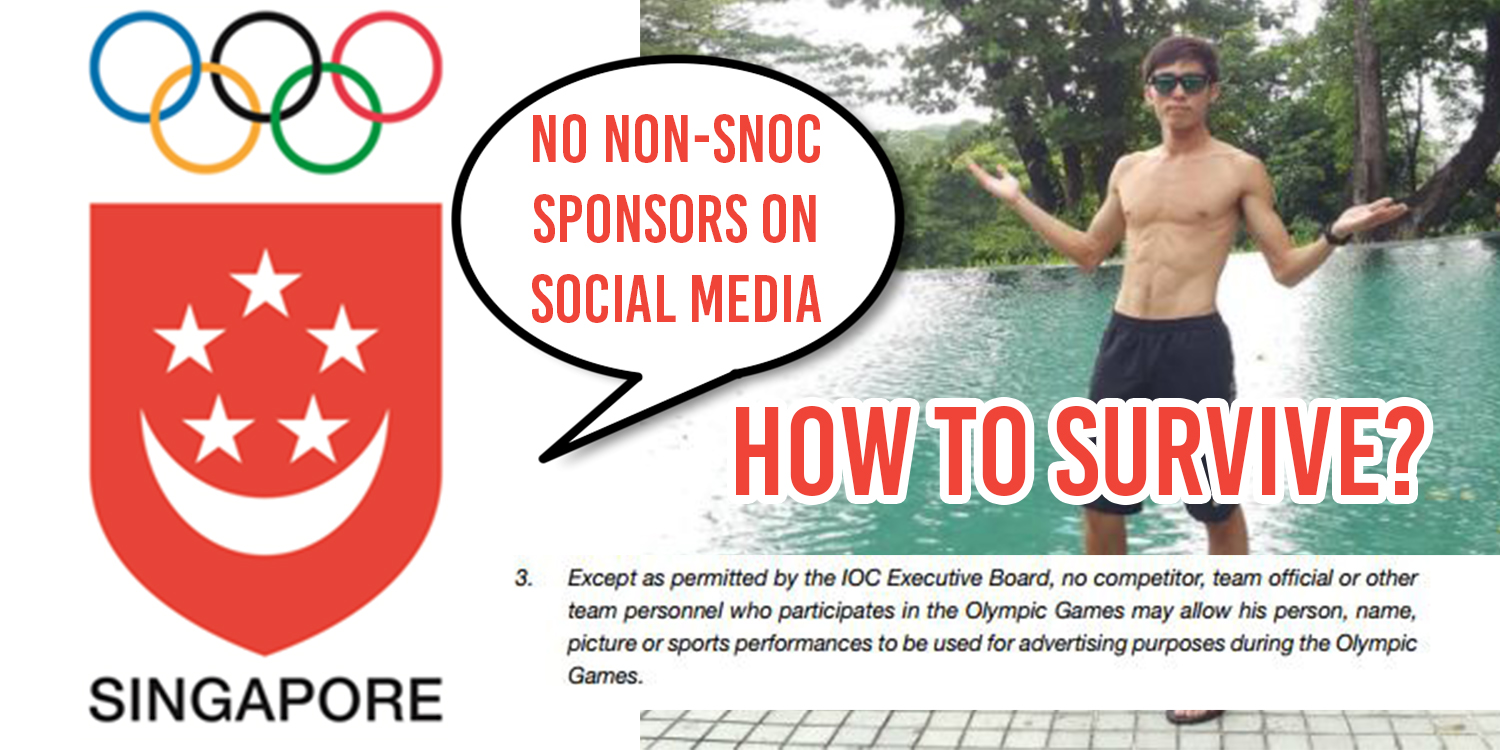 It bans athletes from mentioning personal sponsors on social media if they are not sponsors of the SNOC. 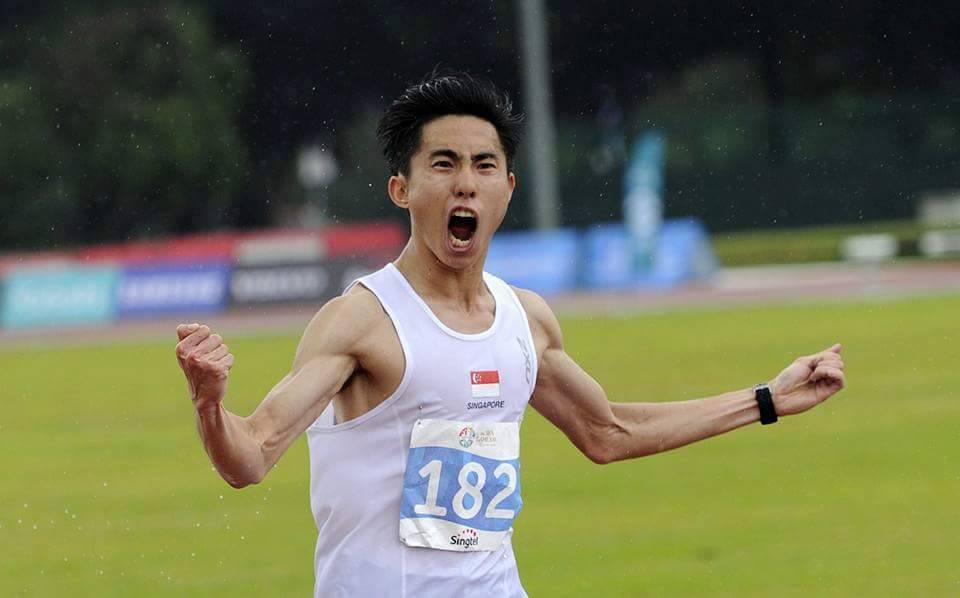 Apparently, the ban is in line with Rule 40 of the Olympic Charter. But is it?

For those unfamiliar with the International Olympic Committee (IOC) rule, Rule 40 states that:

However, what the SNOC may not want to mention is that the IOC relaxed the rule in 2015.

Sports Illustrated reported that the IOC made concessions to the rule, allowing “athletes to tweet and post on social media about non-official sponsors as long as they do not use any Olympic properties or references”.

Having done his research, a disgruntled Soh blasted the SNOC for being stricter than the IOC in a Facebook post on Thursday (Aug 10). Official sponsors pay a premium for exclusive coverage of sporting events like the SEA Games, so it is understandable that they would want to prevent other brands from riding on the publicity.

While Soh said that he respects the contract between the SNOC and its sponsors, he felt that such a ruling was draconian.

He cited this as the rationale for his disagreement:

Athletes having to look for ways to bypass the media ban isn’t a new development, having gained attention at the 2016 Rio Olympic Games.

Sports Illustrated reported that a day before the media ban, a large number of athletes posted shoutouts on their social media platforms to thank their sponsors, starting the #Rule40 movement.

Inspired by the Olympic athletes, Soh also sought creative ways to give his sponsors their due credit without flouting the ban.

He thanked his shoe sponsor ASICS in a Facebook post on Aug 8 without mentioning its name, but just that “it rhymes with basics”. 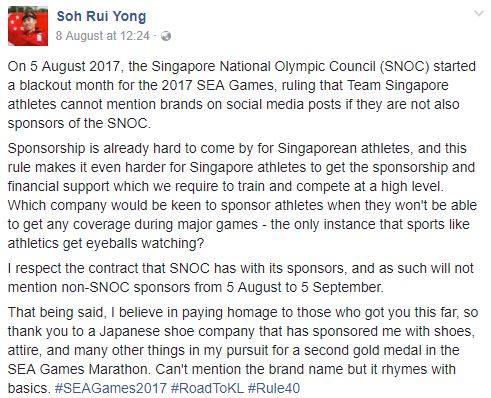 And physiotherapy company UrbanRehab wasn’t named, but a photo of him in front of their sign with a logo was posted instead. 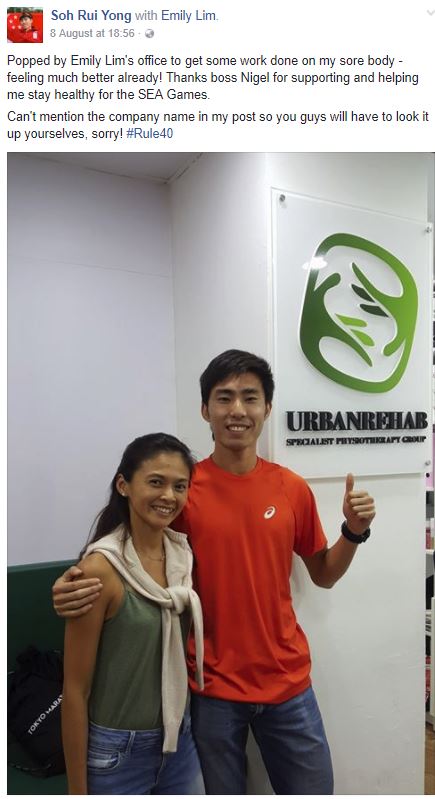 These posts led to the SNOC warning Soh that action will be taken if he continues to flout Rule 40.

Although Soh has been advised to take down his Facebook posts, the marathoner stood his ground and argued that it was ridiculous that the rules for the SEA Games were stricter than those for the Olympics.

He cited a lack of empathy on the part of the officials and sponsors who implemented these rules.

Soh argued that athletes live on a “shoestring budget to make ends meet” and needed sponsorships to aid them.

In contrast, the rule-makers who earn “comfortable salaries” are making it difficult for the athletes by imposing such bans.

This is despite the fact that it is the athletes who help them earn such high figures.

What makes this situation more ironic is that Team Singapore athletes were encouraged to source for their own sponsorships.

In an article in April 2016, Today reported that the National Youth Sports Institute, the Singapore Sports Institute and Deloitte Singapore collaborated on a book to educate “local athletes on ways to successfully source for sponsorships”.

The author of the book, Vickie Saunders, shared that there was a lot of untapped opportunities for athletes and sponsors to collaborate.

However, she added that:

One of the greatest challenges athletes face here is the (lack of) awareness that they are competing at an incredibly high level and doing amazing things. They’ve got so much value to share, with their community, with their sponsors and with Singapore in general.

While Soh Rui Yong has spoken out strongly against the SNOC, he does not hate them and appreciates their action.

In fact, he has made suggestions on how to solve the issue, such as sharing social media airtime.

The ball is in SNOC’s court now — let’s hope that they will be able to find a middle ground with athletes. Or will his complaints fall on deaf ears?

For our athletes participating in the upcoming SEA Games, the MustShareNews team wishes you all the best! 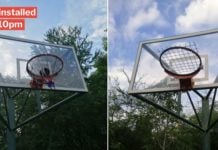