New SPF commercial aims for the stars, ends up in STB territory

With that cringe-worthy Singapore Tourist Board (STB) commercial at the back of our minds, the Singapore Police Force (SPF) have done their to one-up their fellow public service.

You remember that STB one right? The one where a Filipino lady goes around pointing at stuff and saying, “Honey, look!” —

In the highly unlikely scenario where you actually enjoyed that particular commercial, we’ve got a treat for you.

Fresh off the PR success of their cat-saving icons, the SPF have reminded the public of the quality of official campaigns that they are truly capable of.

SPF decided on a guerrilla campaign to remind the public to not fall for kidnap phone scams. An advertisement panel beside a bus stop was retrofitted with a phone that was supposed to ring at random times. Unsuspecting civilians picked up the phone and…it’s better to just watch.

Almost everything about the video is strange. Why would anybody believe that their kid is being kidnapped by a person who called THE PHONE ON AN ADVERTISING PANEL THEY JUST HAPPEN TO BE STANDING IN THE PROXIMITY OF?? #logic

The Netizens Strike Back

As always, the comments never fail to deliver.

Some chose to point out the obvious:

While others concentrated on one particular aspect of the commercial:

More than one turned up with their best Liam Neeson impression:

Bad advertisements are here to stay

The message behind the commercial is an important one. Phone kidnap scams have been pervasive over the years, and the older generation seem to fall prey to them particularly easily. But did the advertisement really have to have production values similar to the typical episode of Crimewatch?

But maybe it’s a good thing. Maybe this is exactly what is needed to make such public service announcements go viral. Advertisements so bad, they’re good. 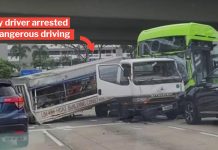