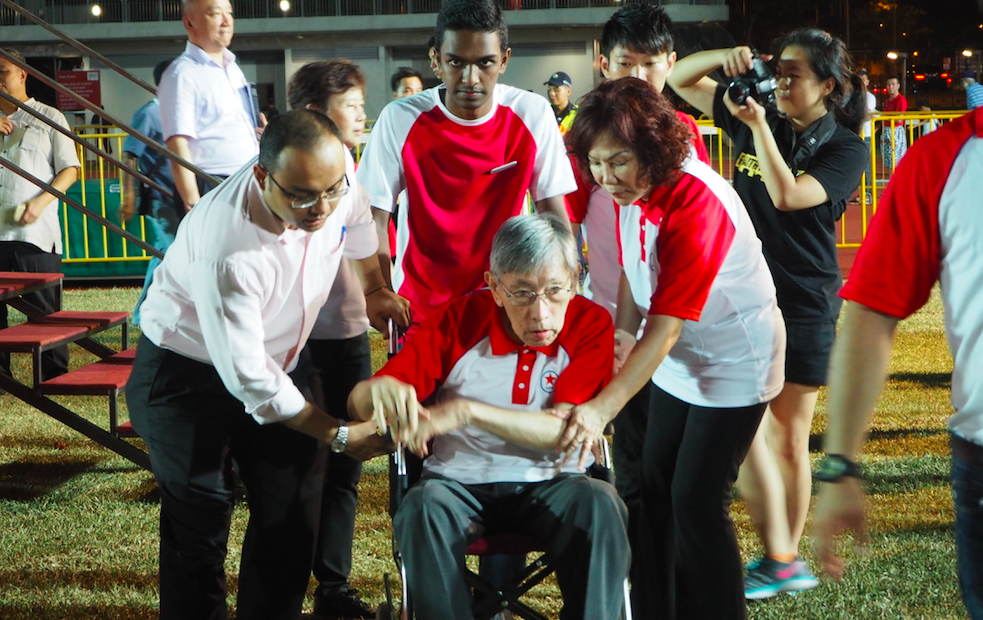 We’re halfway into the hustings by now, with all parties actively holding rallies. Singapore People’s Party (SPP) was no exception as well. Their third rally, held yesterday (6 Sep), was the Jeannette for Mountbatten Rally.

On Facebook, SPP said that Chiam See Tong would be speaking at the rally, which got me pretty psyched up since I’ve heard so much about the man.

Here’s what I saw:

7:30 p.m: Oops, I’m running late. I had intended on arriving early to score a good spot to take pictures of the candidates. I silently cursed my lack of directional sense and arrived to a decent turnout. 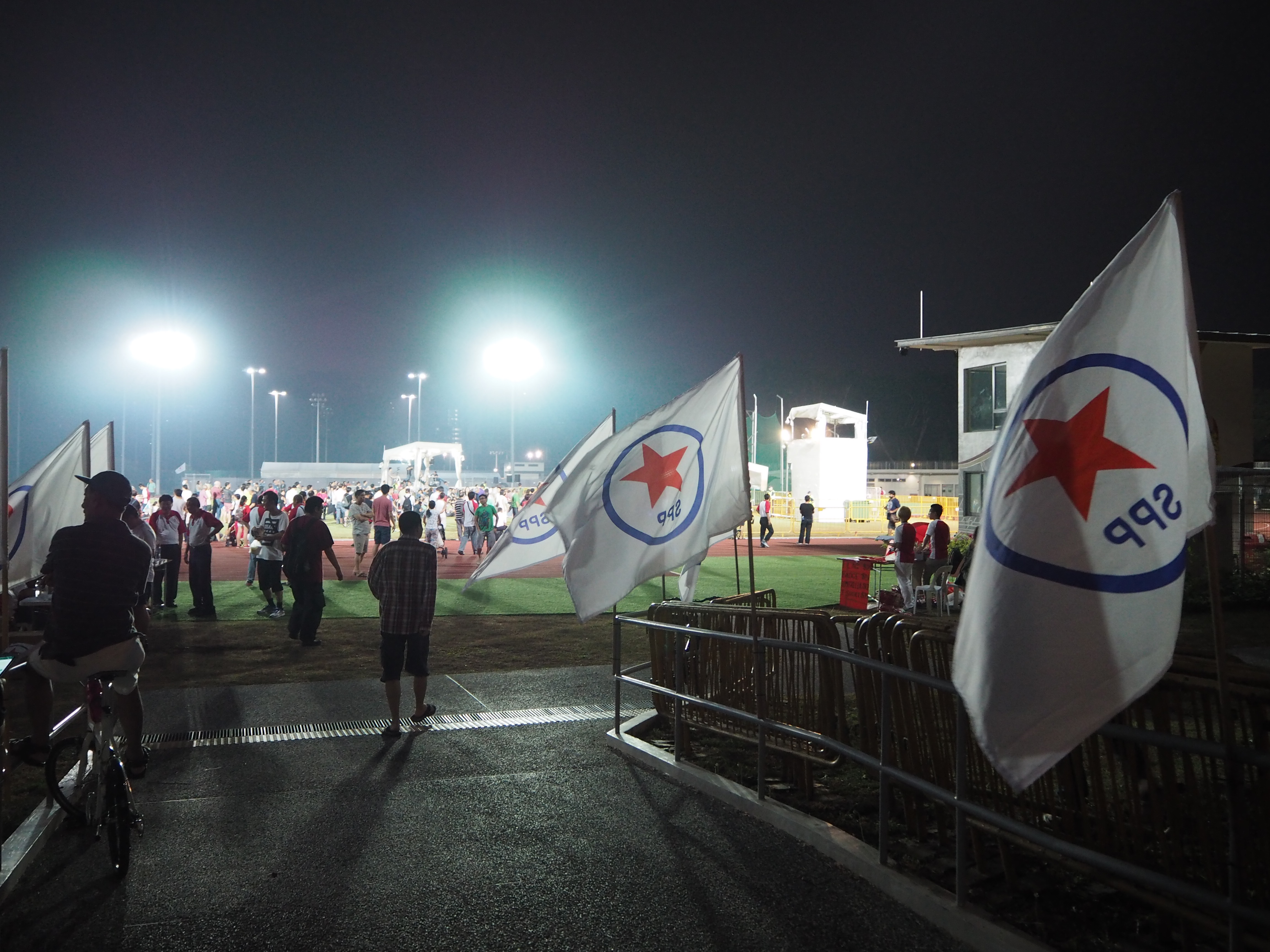 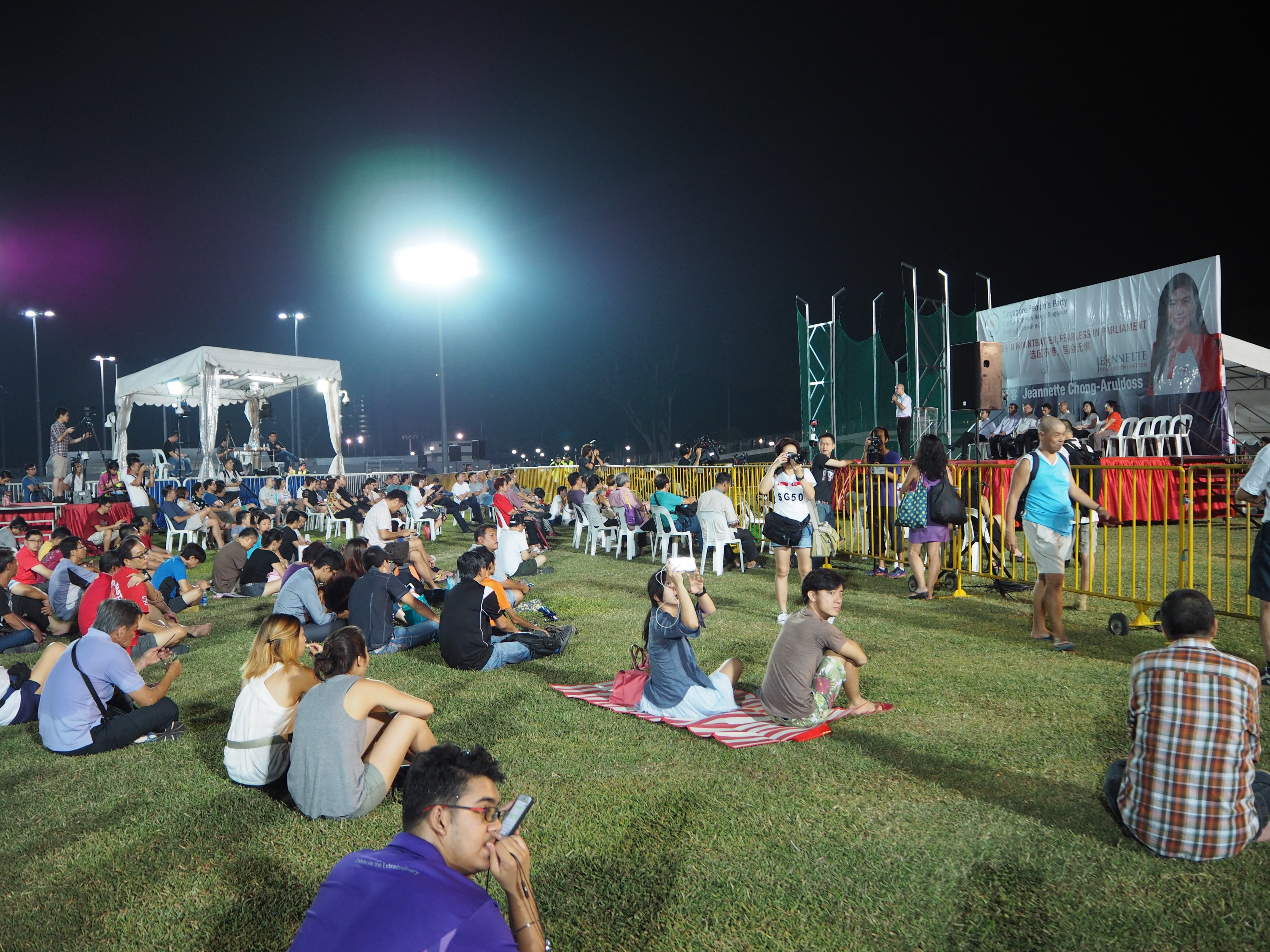 7.35 p.m: I started towards the grass patch, only to be momentarily sidetracked by this: 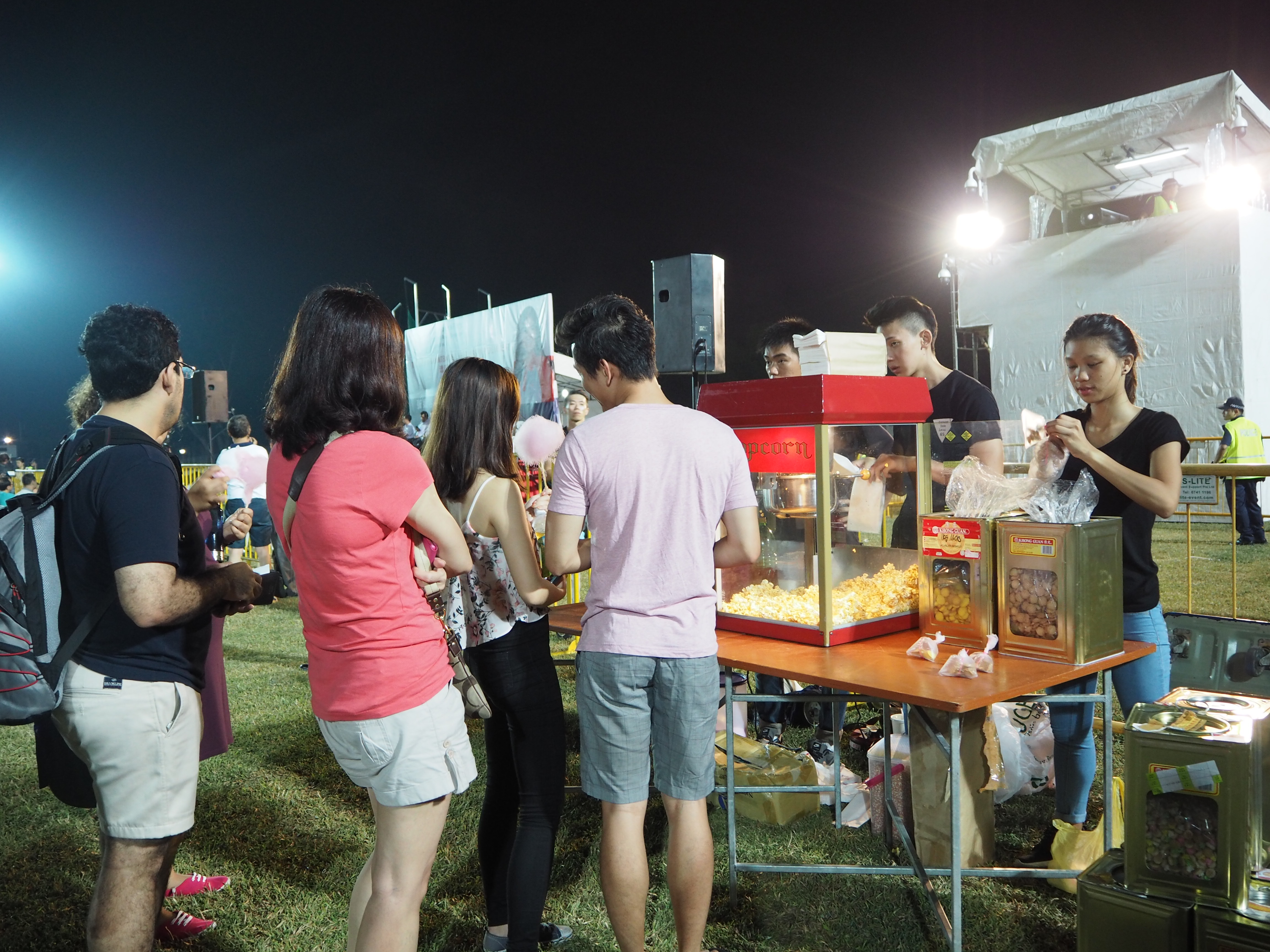 The auntie in me immediately thinks: Is this free food?

After some observation, I realised that there was no transaction of money and concluded that it was free.

And if you must know, I got candy floss and popcorn. They were okay-ish and added on to my sore throat later, so I can’t say I didn’t regret.

7.40 p.m: I go up to the front to get a good view of the stage. Getting a good view isn’t difficult, given that most attendees are seated on the grass patch picnic style. I stand to hear what Bishan-Toa Payoh candidate Abdillah Zamzuri, who was the second speaker of the night, was saying.

He talks about PAP:

Is this the type of leader that you want? 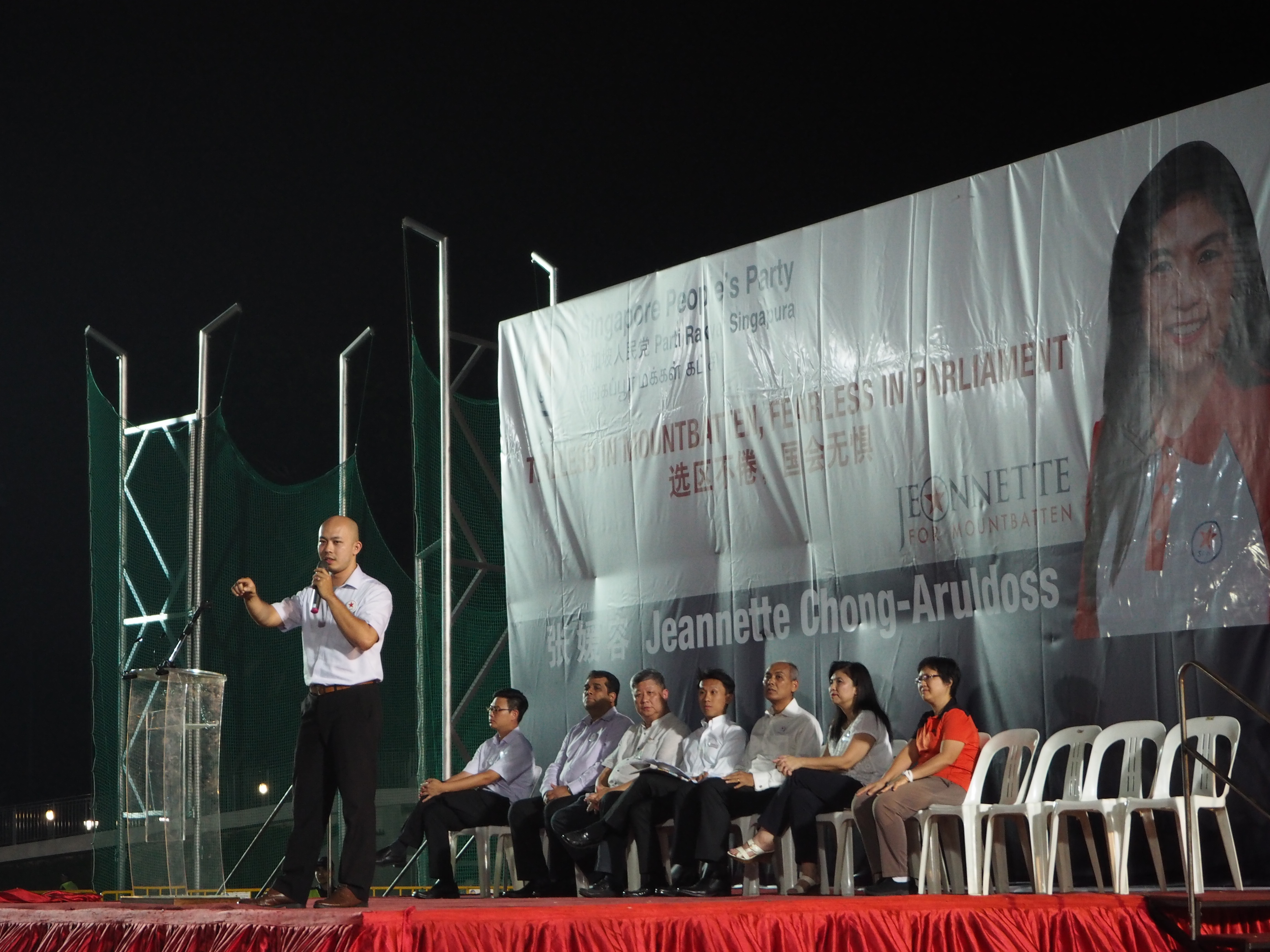 7.45 p.m: While he was speaking in Malay, I wandered off to a mini art gallery. It depicts the Dakota Crescent area, whose fate of demolishment is still largely unknown. 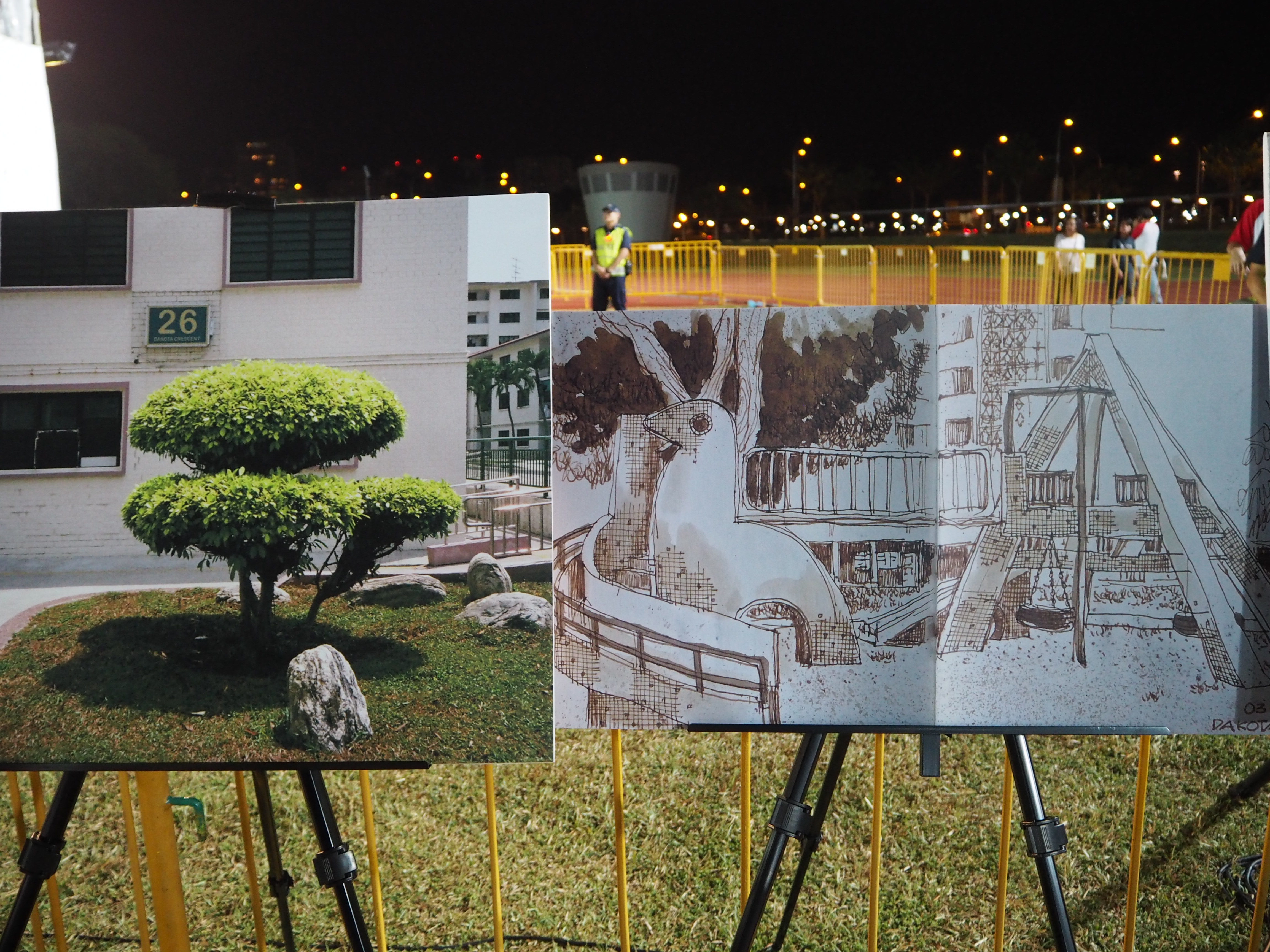 I hear a grandfather telling the auntie beside him about the Dakota area passionately. 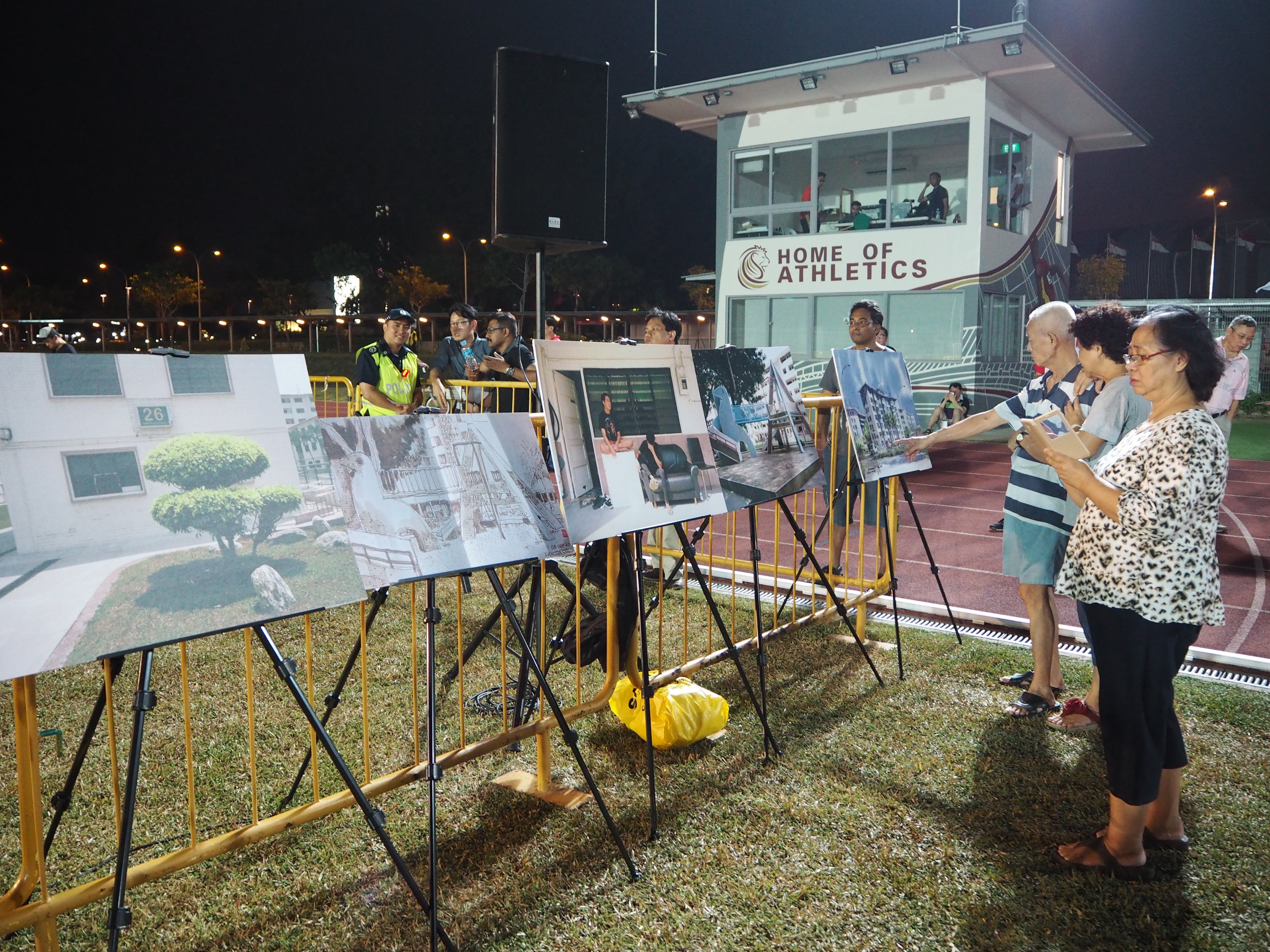 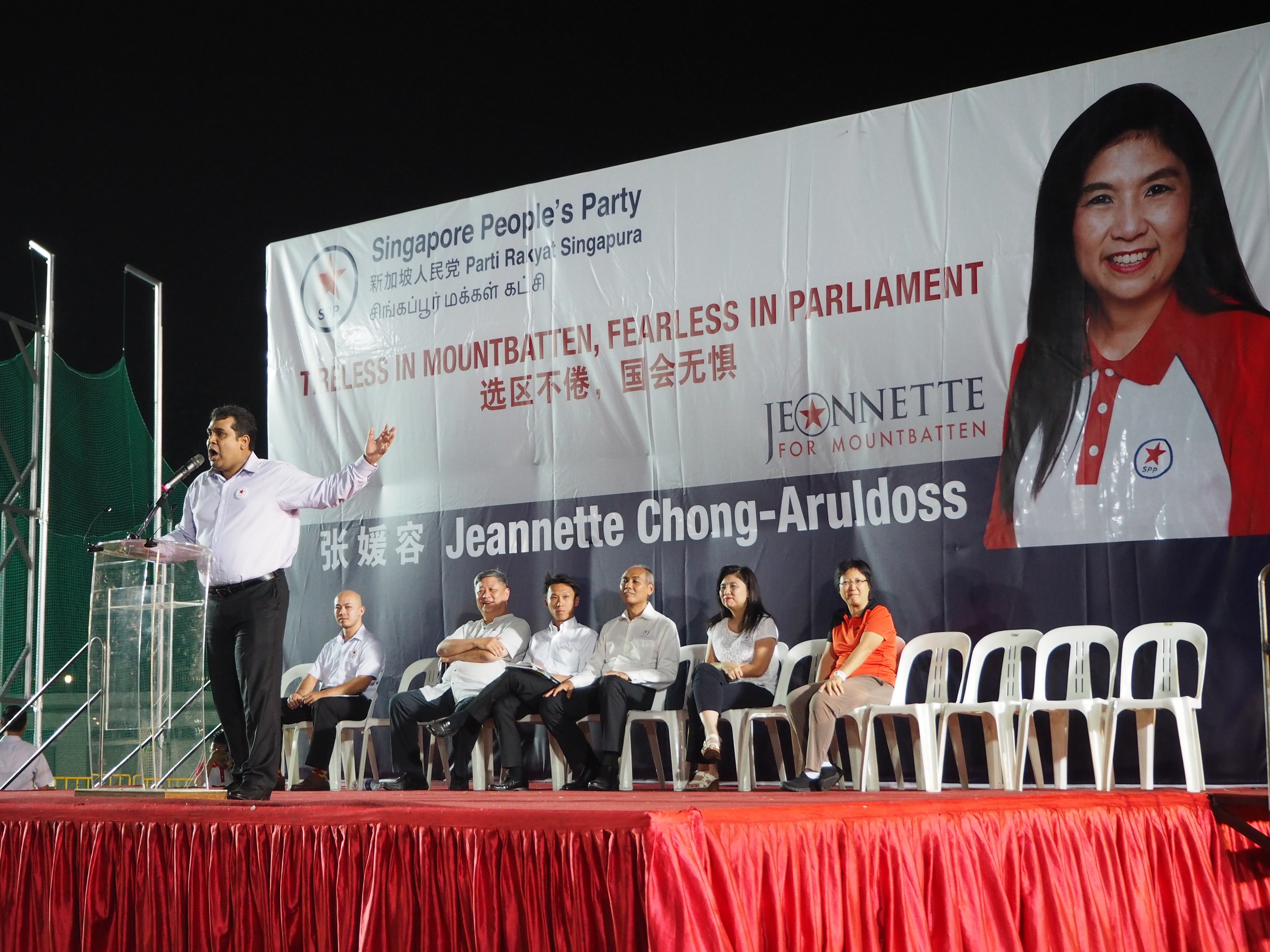 This PAP government has forgotten how the ordinary Singaporean lives. TIO BO???

Cheers and whistles come from the crowd, who answered TIO!!!

Philemon continues speaking about Singapore’s immigration policy, urging the audience to “turn off the tap” by voting for Jeannette Chong-Aruldoss.

Meanwhile, the PAP is giving scholarships to foreigners.

Which government in the world will tell its people, don’t study so much!

So, if you dont study so much and you bring in foreigners who are highly skilled and who have studies and have studied well, you know what will happen in the future? Our children will become the servants of foreigners. Is that what you want?

Turn off the tap! Close the gap! And the PAP government will tell you, that if you vote for opposition, liu lian bo bao jiak (the durians might not taste good). Don’t worry! Jeannette knows where the best durians are!

Philemon ends off by saying that “Jeannette will get the D24 durian for you”.

Will we be expecting frequent durian parties in Mountbatten should Jeannette be elected? 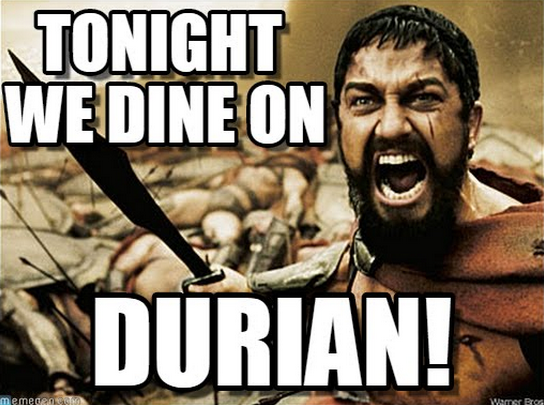 The medical doctor of 30 years says he is voicing out as a concerned citizen, and “diagnosed” the symptoms of Singapore. He talks about Singapore’s high suicide rate, citing a recent example of a straight A student who plunged to her death after getting 2 Bs in her results.

From a doctor’s point of view, Singapore is very sick. 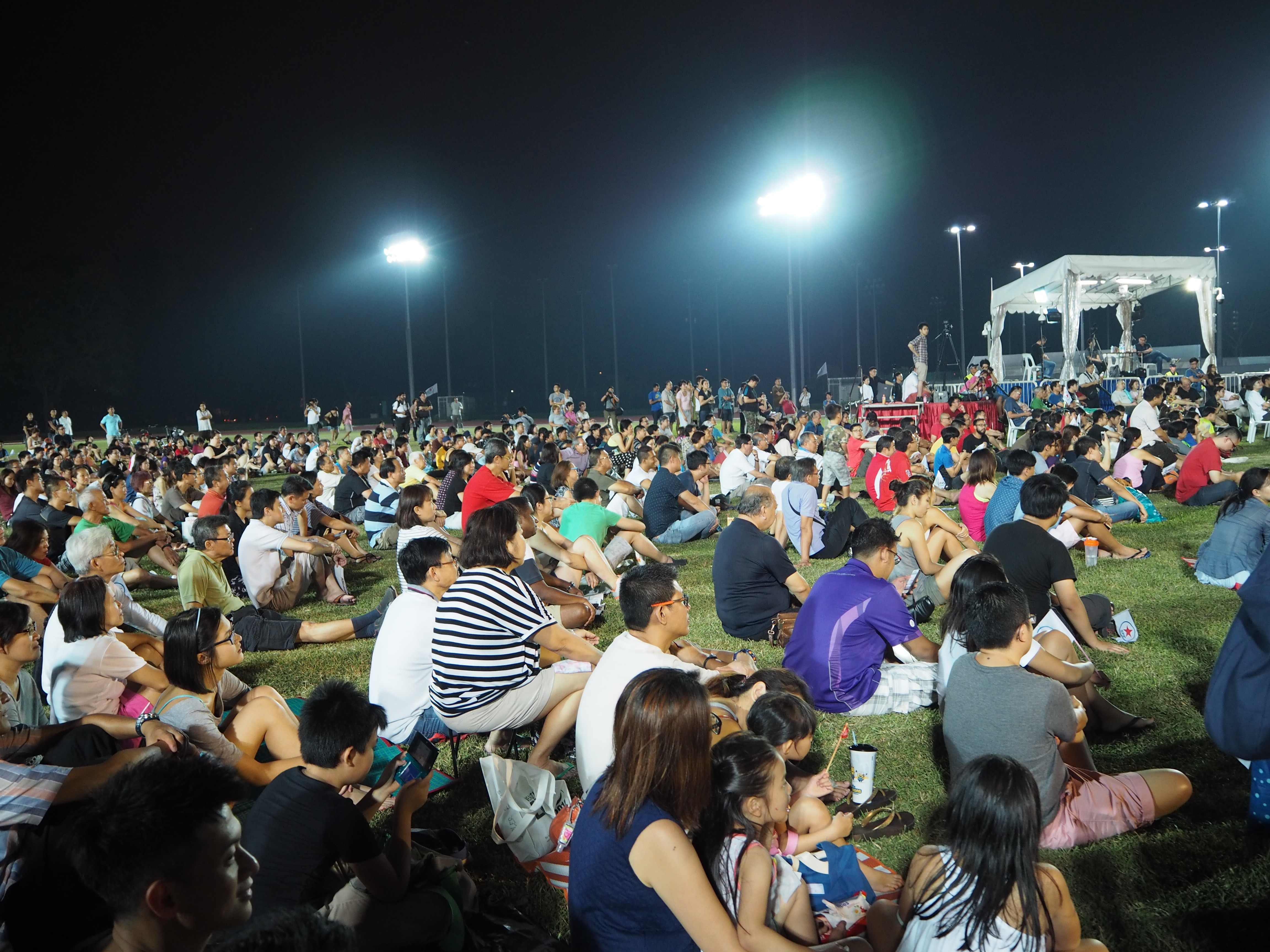 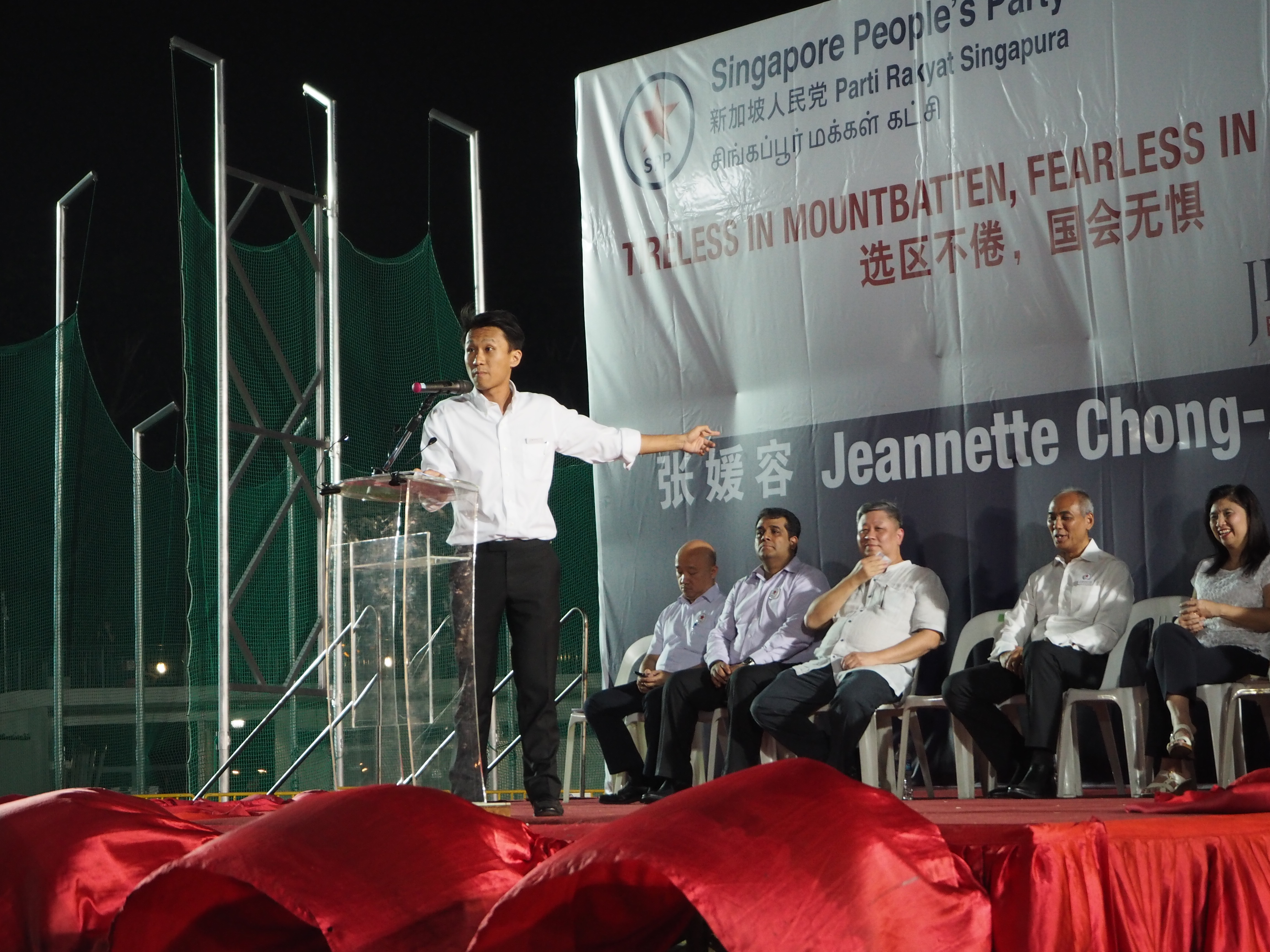 The lawyer, who is also the co-founder of The Online Citizen, specialises in litigation. He talks about how Jeannette has inspired him to “put his professional life on hold” to join Jeannette on her campaign trail.

We need an independent, considered, rational Opposition voice, to check the PAP.

8.30 p.m: Benjamin Pwee is up next, doing a quick advertisement in English for Mr Chiam See Tong’s photo book. He adds that supporters can ask Mr Chiam for an autograph on the book later on. He abruptly switches to speaking Cantonese, speaking about issues like foreign labour, CPF, and healthcare.

He added that the government was not listening to the people, telling them that they can opt to withdraw their CPF at a later age. Pwee also shared an anecdote about his elderly mother, who had to pay $3,000 in hospital bills after deduction from her Pioneer Generation package and whatnot, for a day surgery.

He then spoke in Mandarin, and said “you’re choosing an MP, not TC manager”.

“Are all the elites in Singapore only in PAP? What about those sitting here?” *referring to the SPP candidates behind him* “They are all elites! Not in PAP, but SPP.”

Open your eyes, and don’t think all the good stuff are only from PAP. Okay, maybe the NTUC vouchers and whatnot are. *some laughter from the crowd* Think it’s probably from PA.

Just enjoy whatever benefits the PAP gives you. It doesn’t mean you have to vote for them because it’s exchanged with our own money.

8.50 p.m: I see a man with multiple Opposition flags in his bag. A few people look at him, curious and amused. He was wearing a top that says Majulah! The Singapore Spirit. How very patriotic. I was a little amused too, but quickly shifted my attention back to the emcee, who introduced the next speaker: James Martin Aruldoss, who is also Jeannette Chong-Aruldoss’ husband. He started off speaking in Teochew, saying Jeannette ga li zor gang, tia li gai wei (Jeannette works for you, and listens to you).

He also compares PAP’s Mountbatten SMC candidate with his wife, saying that Lim Biow Chuan works for the government and listens to the government, whereas Jeannette does not work for PAP, so she does not fear them.

He then spoke in Malay, which I don’t understand a word of.

I begin to feel restless, with my camera weighing me down.

There’s nothing wrong with politics, it’s the politicians that choose to make the business dirty! And politics is for everyone — it’s your business, my business, our children’s business, everyone’s business! Not just the PAP.

9.00 p.m: Excited chatter fills the air. I look around, only to realise that Mr Chiam See Tong has arrived backstage.

The crowd rushed forward to take pictures. I did the same, annoyed with the short zoom range of my camera. 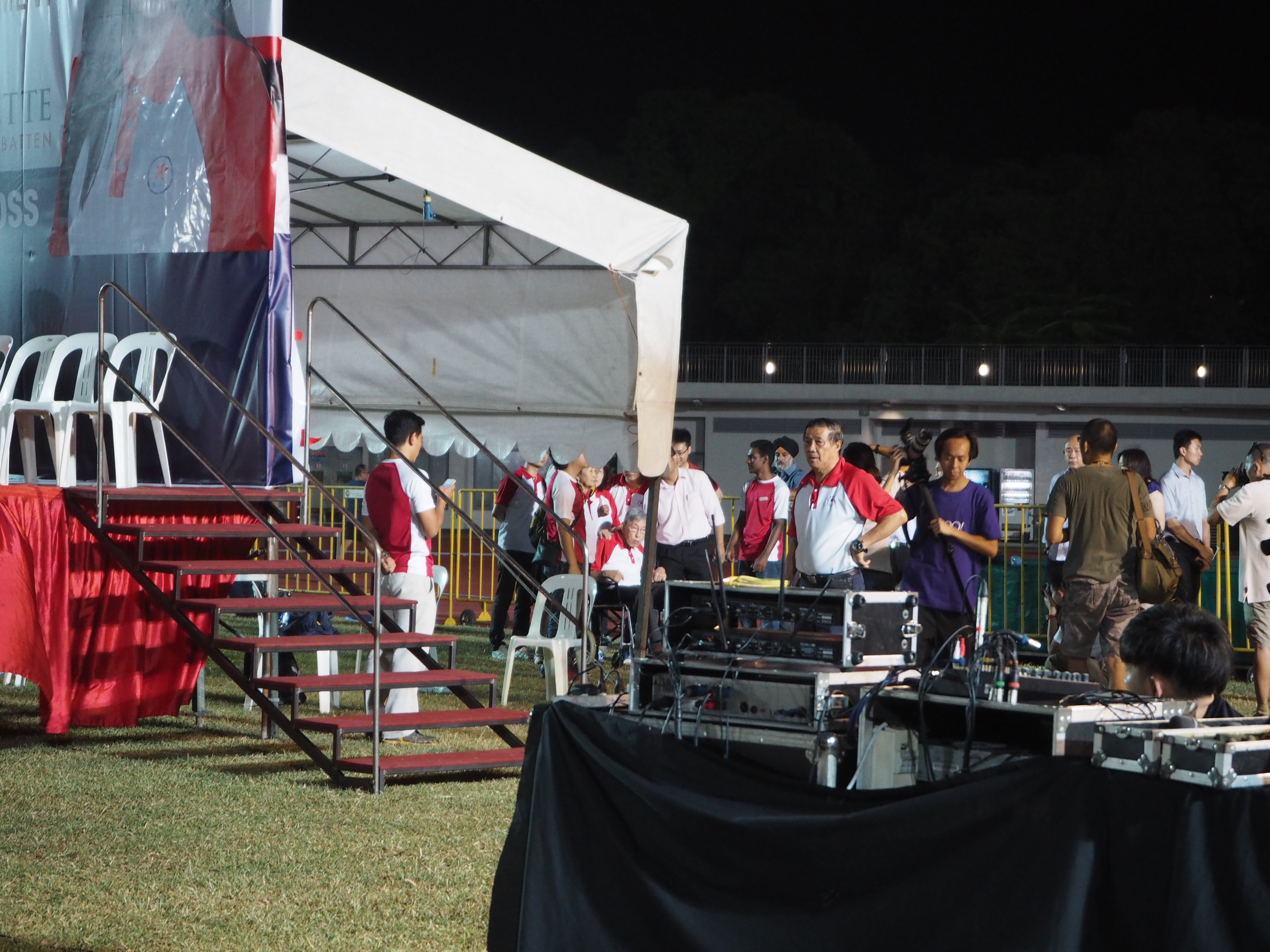 A woman near me hails him as a hero, shouting: “Chiam See Tong, you’re my hero!”

The SPP team helps Mr Chiam up the stage gingerly. 9.03 p.m: He soon got seated, and it’s time for Jeannette Chong-Aruldoss to address the crowd. She talked about her desire to serve the Mountbatten residents, and about Chiam See Tong and how he ran Potong Pasir. She also mentions that recently, “the PAP government has made it its national agenda to cast doubt on Opposition parties to run a town council successfully. As far as SPP is concerned, that is a myth”, alluding to the AHPETC saga.

Mr Goh Chok Tong recently said, the PAP is its own check. Is that possible? It is a very dangerous idea, and a very undemocratic one.

The PAP MPs are mice when talking about the accounting lapses flagged by the accounting auditor-general. But they crow like roosters at the shortcomings of the Aljunied Town Council.

Someone in the crowd says “Wayang wayang lah!”.

Regardless of how good Mr Lim’s (Biow Chuan) intentions are, who does he answer to? He answers to Mr Lee Hsien Loong. But I can speak up for you.

Mr Lim really shouldn’t make a virtue out of necessity. It is his job to ensure that the constituency is maintained.

She also talked about Dakota Crescent, and how residents do not want it to disappear.

Jeannette ends off her fiery speech with the speech she delivered on Nomination Day.

9.20 p.m: It’s Lina Chiam’s turn to speak. She starts greeting the crowd, and soon faced problems with the mic.

Someone in the audience said: “Even the mic is scared of you!”.

The emcee goes to her rescue, and she resumed her speech. 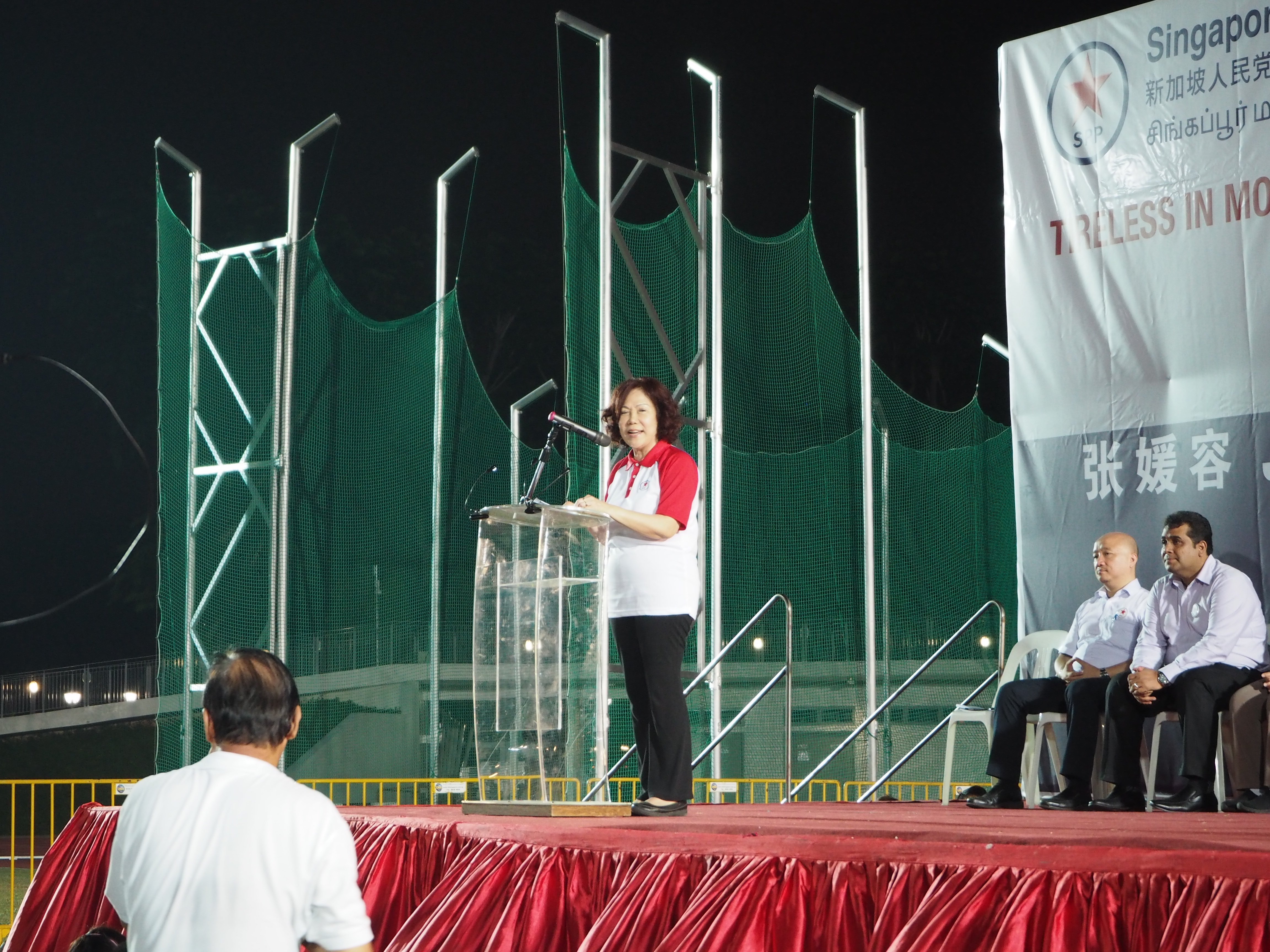 She talks about how we cannot depend on the PAP to serve us, and that they’re surrounded by Yes Men (people who tell the leaders what they want to hear).

The government is interested in fulfilling their own targets. They say, well I have x million dollars of grants, so it’s not my fault! It’s not my fault if you don’t have productivity growth. Is that Singaporeans’ fault?

9.30 p.m: The long awaited moment has arrived. Everyone was waiting with bated breath for Mr Chiam to deliver his speech. The party members helped him up, and bring the mic and the makeshift stand over to him.

Someone near me yelled, “You’re my grandfather!”. “I just want to thank the residents of Mountbatten.”

He continued thanking the crowd in between pauses for staying till the very end of the rally. He also asks the audience to support Jeannette Chong-Aruldoss.

With his voice becoming progressively slurrier, and he manages a weak “Thank you” to end off his speech.

He looked like he had a lot more to say, but unfortunately could not manage.

Mr Chiam drools a little, and Ravi Philemon uses a tissue to wipe the corner of his mouth.

9.35 p.m: The rally ends. The emcee thanked the crowd, and SPP member stood up together, hand in hand. A man beside me said of Mr Chiam, “Wa he’s very weak already leh but he still come”.

I’m non-partisan, but deeply impressed by this man.

Mr Chiam heads in my direction as he was wheeled by his comrades. I brave myself to take shots of him. He waves to the crowd and raises his arms in the air. I manage a few pictures and am mobbed and squashed within seconds like a pancake as people rushed forward to shake hands with him.

But hey, I survived my first rally.

I’m not gonna deny — before attending the rally I was actually dreading it. I mean, 3 hours? 3 hours of boring politics? Not exactly my cup of tea.

But being physically present at the rally, I realised it was nothing like what I thought. The speakers spoke with such gusto it made me actually want to hear what they have to say. The crowd was pretty awesome too, cheering, whistling, and chanting. Basking in the atmosphere was definitely a whole new experience from merely streaming the rallies live at home.

Seeing Mr Chiam See Tong in person was a first, and witnessing how much respect and admiration the crowd had for this man blew me away. He must have done a lot for the people to command this level of respect.

SPP might be a small political party, but definitely not small in strength.

All photos via MustShareNews