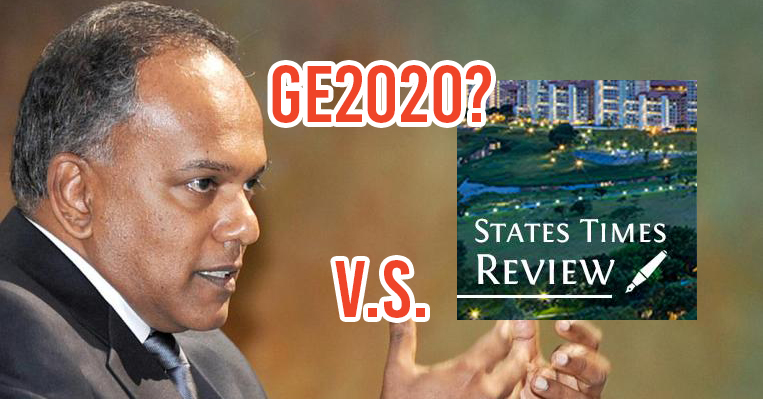 Based in Australia, Singapore news media outlet States Times Review (STR) has found themselves embroiled in a war of words with Minister for Law and Home Affairs K. Shanmugam.

This came hot on the heels of Mr Shanmugam’s scathing attack on the news site — claiming they are publishing fake news.

STR editor Alex Tan Zhixiang didn’t take his stinging accusations lying down and retaliated with a damning criticism of Mr Shanmugam himself, before challenging him to a showdown in the General Elections 2020.

It all started out when Mr Shanmugam addressed the issue of tackling fake news in Parliament on April 3.

He acknowledged the rise of false reporting in Singapore but admitted it isn’t a major concern yet, as it hasn’t had any significant impact on any national or international affairs. 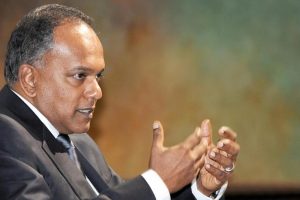 Mr Shanmugam began by speaking about the laws in place to tackle such issues.

“Under our current law, there are limited remedies to deal with these falsehoods. For example, it is an offence under the Telecommunications Act to transmit messages knowing it is false. But these remedies are ineffective. The circulation of falsehoods can grow viral today very quickly and so we need to do more.”

Mr Shanmugam singled out websites like TSR, the now-defunct The Real Singapore (TRS) and All Singapore Stuff for producing untrue stories. Here’s the bit regarding STR:

“Last August, the States Time Review claimed a near-zero turnout for former president SR Nathan’s funeral, and that kindergartens kids were forced to attend, in an attempt to paint him as an unpopular president.

Hoaxes like these can have real world consequences. If not quickly corrected, they can cause harm to Singaporeans, alarm to public, emergency resources will have to de diverted, and reputations of businesses and people can be completely, unreasonably, unfairly damaged.”

Back in mid-2016, socio-political site The Real Singapore was shut down after the owners were found guilty of sedition. Alex, one of the co-owners, stepped up to set up STR in a bid to carry on where TRS left off.

STR pulled no punches in an open letter, and condemned Mr Shanmugam for being a dictator and corrupt politician.

“When I read the good news on Straits Times of you vowing to “review” laws because my website is “harming innocent Singaporeans with fake news”, you’ve simply brought confirmation to my long-time suspicion: Singapore is indeed North Korea.

And it appears that he had predicted things would come to this from the start.

“I was a writer for Temasek Review and The Real Singapore — both sites have since been shut down by your government and hence I am not new to your threats. As such, I hereby assure you that in less than a week you shut down States Times Review, a new website will come up.”

Alex further fanned the flames by accusing The Straits Times of being a state-controlled media outlet, which led to people turning to alternative sites for news.

“STR is only successful because your government is a corrupted regime, notwithstanding your state-controlled media Straits Times is a propaganda mule.”

Challenge On The Cards For GE2020

Mr Shanmugam rounded off his speech by further highlighting the severity of fake news in Singapore.

“Fake news today, we must assume can be used as an offensive weapon by foreign agencies and foreign governments… to get into the public mind, to destabilize the public, to psychologically weaken them.

That’s a very serious threat and it will be naive for us to believe that governments or state agencies don’t engage in this. There is enough evidence that they do.”

As a parting gift, Alex explained why Singapore can never progress and decided to have a jibe at other Ministers.

“In all honestly, you yourself probably know you are just another corrupted politician in history.”

“Singapore can never progress with face-palm yes-men like you, Tan Chuan Jin or Chan Chun Sing. Only those who dare challenge the status quo will bring Singapore to greater heights. You should grow some shame, resign and return your million dollar salaries.”

But shit hit the fan when Alex threw down the gauntlet at Mr Shanmugam.

“I won’t return to Singapore because your government is corrupted. Period. Your police and judiciary are all corrupted.”

Let’s face off each other in a single-member constituency in the 2020 election.” (emphasis ours)

Netizens were largely supportive of Alex and some hit back at Mr Shanmugam. 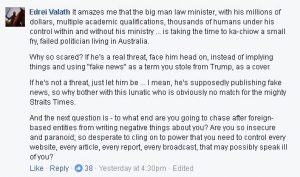 It will be interesting to see how the saga pans out and the mud-slinging doesn’t seem to be ending anytime soon.

More importantly, are we set for an epic clash come GE2020? Probably not, but we’ll just have to wait and see.