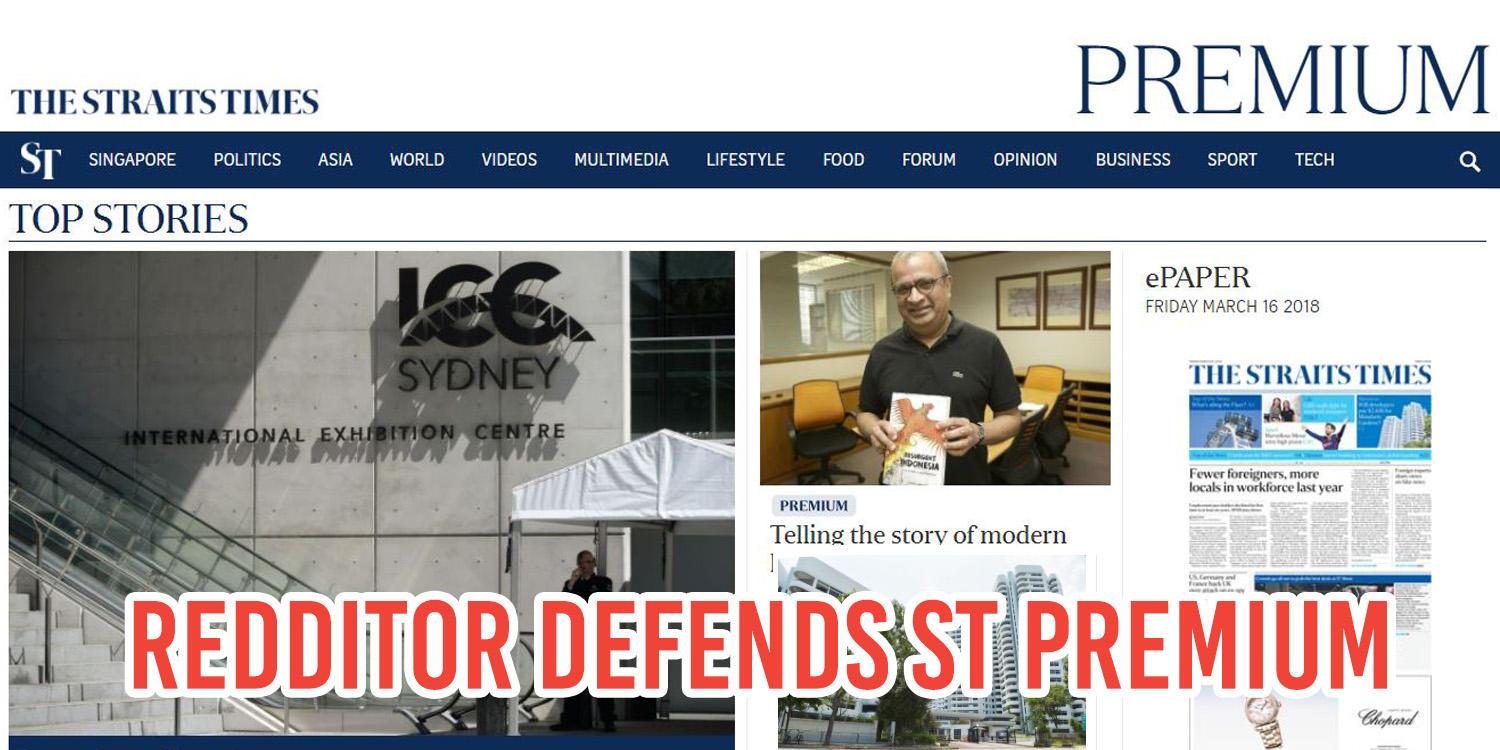 ST Premium Necessary To Save Jobs And Its Content Is Decent, According To U/SteaksBacon

As frequent browsers of local news, we at MSN, along with the rest of Singapore, were pleasantly surprised when The Straits Times (ST)’s homepage greeted us with a sleek redesign.

The redesign also saw the introduction of ST Premium, a new subscription model that replaces the old system, which limited the number of free articles to 15. 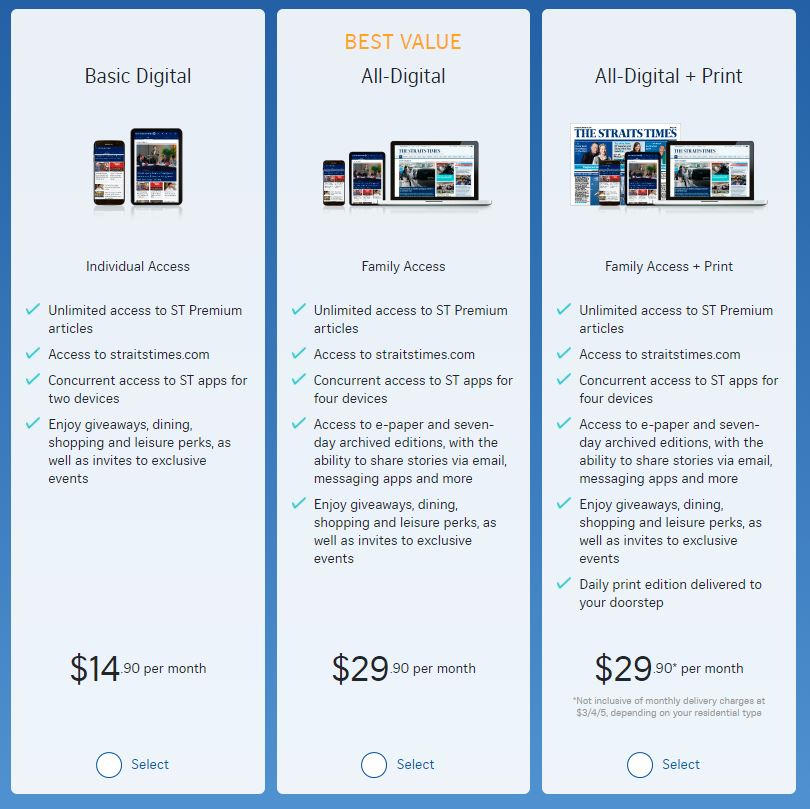 The current basic plan will set you back S$14.90 a month.
Source

Unsurprisingly, many netizens have complained about the move.

Their grievances largely derive from the prevalence of Premium articles:

As well as ST’s quality of journalism:

Redditors also felt that there was no need to post ST Premium articles on the subreddit, since most users don’t have subscriptions and can’t access them anymore.

The way we were

Before we go any further, let’s take a look at the old system, a time before “ST Premium”.

Once upon a time, ST restricted non-subscribers to a limit of 30 free articles per month, later reducing it to 15. 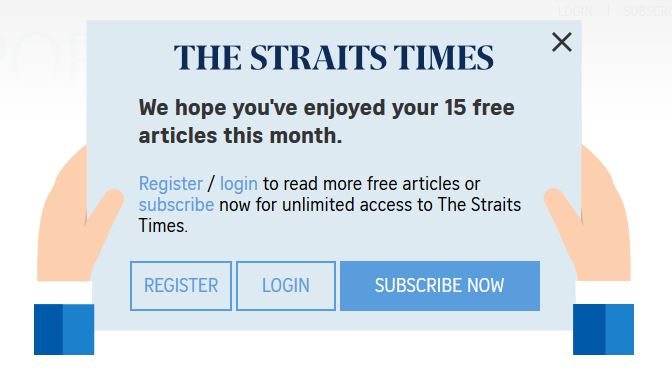 One could easily bypass this paywall by deleting cookies or browsing in incognito mode. You’re welcome.

Therefore, there was little incentive to pay for a subscription, which would set you back about $30 a month.

And that’s how we got here.

In the newly-implemented system, the monthly article limit is removed.

Most articles are free, with some articles walled off and placed in the “Premium” section, which only subscribers can access.

The good: No need to work around the article limit.

The bad: A few articles are completely blocked off from non-subscribers. A quick glance shows that the articles span a variety of topics from politics to nature.

Noting these trends, a Redditor has come out in support for the besieged paper in an in-depth post published on Thursday (15 Mar).

Titled “The hate against Straits Times’ “Premium” content is not justified“, he/she set out to protect the national broadsheet from a deluge of hate.

He pointed out that ST “has to get its revenue from somewhere”.

It is quite clear that such a method (ad revenue) of funding … is no longer practical.

And the solution? ST Premium.

The Reddit user then addressed concerns that so many articles were now Premium.

He claimed to have actually looked through ST’s website and found only a small portion of the most recent articles labelled Premium.

This works out to less than 5% of ST’s content.

Think of the people!

u/SteaksBacon then stated that ST has 16 bureaus and special correspondents worldwide, in addition to its local staff, who all “have to be paid somehow”.

I would not say that the “Premium” system is a fantastic invention, but you can see why Straits Times is doing it in the wake of falling revenue and impending layoffs.

Being the worldly news consumer that he is, he also compared ST’s subscription model to that of other global media outlets.

Not satisfied with discussing the subscription model, the Redditor also spoke up for ST’s quality of journalism.

He wrote that claims that ST is nothing more than a “government mouthpiece” are unsubstantiated.

After all, he found ST “pretty decent” in its coverage.

To him, no totally objective media outlet exists, pointing to former British PM Margaret Thatcher’s outbursts about the BBC and Donald Trump’s offensive on CNN and “fake news”:

Many of the major media outlets report with slants, and even a larger number of them engage in sensationalism. When compared to them, The Straits Times’ news coverage is relatively tame and fact-centered. Yea, Straits Times might be biased and might have a pro-government slant, but its nowhere as bad and misinforming as some of the other media outlets. At least Straits Times does not perpetrate falsehoods and openly attack people.

Summing up, u/SteaksBacon said that it is wrong to “automatically assume that ST is bad”. See? Even Morgan Freeman agrees with me.
Source

u/SteaksBacon definitely made some salient points about the need to find new revenue streams.

But whether we have truly independent and “fact-centred” journalism is still up for discussion.

Despite the emergence of independent media outlets, like the one you’re reading right now (thanks), Singapore Press Holdings and Mediacorp are still major sources of news for the masses.

And while “Premium” content may refill the coffers, it might not do much to lift our measly rank of 151st on the 2017 World Press Freedom Index.

But with their revenues now possibly secure, maybe that’s something our mainstream news outlets could work towards.