TRS’ spiritual successor has no intention of speaking to mainstream media

When you can no longer do certain things in Singapore, you leave.

That was probably what Straits Times Review editor Alex Tan had in mind when he moved to Australia, believing that he would be arrested if he stayed in Singapore due to his links with recently-shut website The Real Singapore.

Alex Tan was a co-founder of TRS and regularly contributed to the website. His new website, Straits Times Review (STR), is an exact duplicate of what TRS was, right down to the “What do you think?” captions and other questions meant to spark debate in comments.

Given the recent buzz over the suspension of TRS, mainstream media has picked up on the website and asked for Alex’s comment.

Instead of commenting, all he had to say were similar statements: 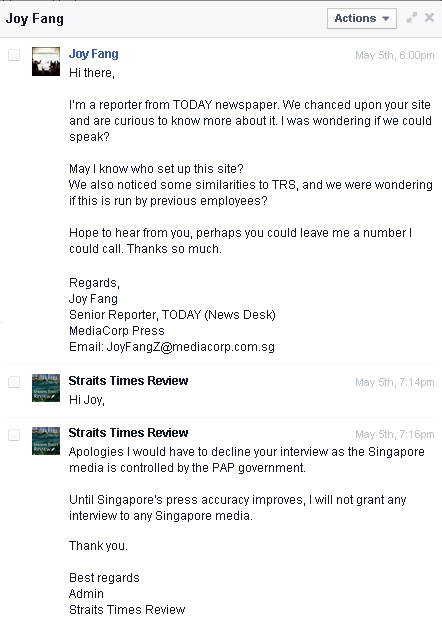 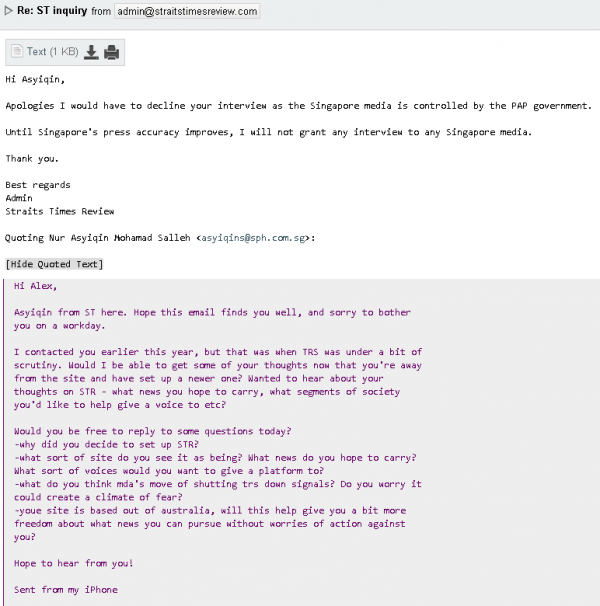 The end result was that Alex simply ‘declined to respond to questions’.

Since Monday, STR’s Facebook page has garnered more than 6000 likes — probably with some help from mainstream media coverage of the site.

Fabrications About The PAP  has posted some potentially damaging info about the site though.

That, um, might explain something about the meteoric rise in likes.

MDA on the prowl

Meanwhile, MDA has also gotten wind of the situation, and is looking into the site for possible links to TRS.

STR bears the same initial letters as TRS. Coincidence? I think not!

Presumably, they are afraid that STR is tied to the TRS editors currently charged for sedition, Ai Takagi and Yang Kaiheng. Yang has been allowed to return to Australia to visit his ailing father.

Takagi and Yang had been ordered to not set up another website.

And if STR is indeed linked to TRS, could MDA possibly block the website like it does for pornographic websites? MDA cannot ask STR to shut down because it’s based in Australia.

This probably means that STR will be around, at least for a while.