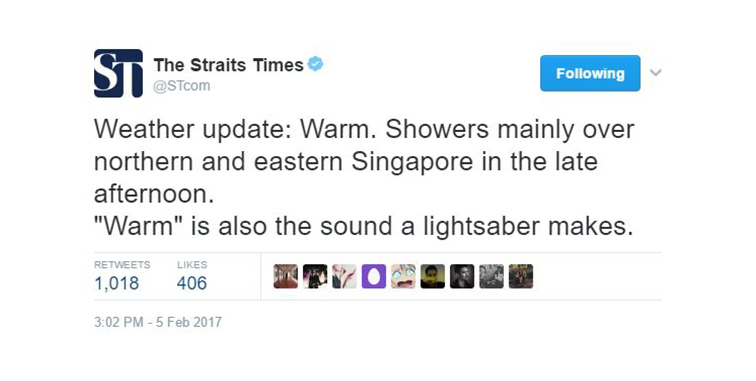 Since the beginning of this year, he or she has been attempting to make jokes about, of all things, the weather. Well, you know what they say… if you have nothing else interesting to talk about, I guess the weather is always a good last resort.

These tweets, however, grabbed our attention as the normally serious Straits Times isn’t known for levity on his social media platforms….or at all, for that matter.

Here are the series of tweets, saved for posterity from the earliest to the most recent: 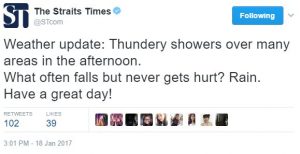 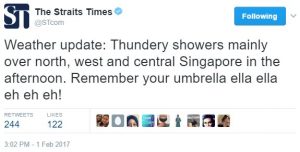 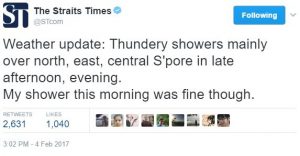 Observant viewers would have noticed that all the tweets were on mundane weather updates – maybe whoever was behind the tweets was only allowed to work on weather tweets?

Those who replied over Twitter to the weather-related tweets were generally amused. One tried to make another, equally cringeworthy joke:

Many guessed that an intern was behind the tweets – are they implying that ST’s full-time journalists don’t know how to have fun, or have been whipped into submission?

Many actually loved the tiny dose of humour and expressed support for whoever was behind it:

Some party poopers found the tweets lame and expressed shock:

As an indication of how strict the general public thinks The Straits Times is, one commenter thought the person behind the tweet would be fired:

While we don’t think the attempt at humour was that much of a success — the jokes seemed stretched, like they were trying too hard to be funny — at least whoever was behind it tried. Sometimes it’s the small things that can lighten up one’s morning commute.

And thus far, the tweets haven’t been deleted — yet.

It may be a signal that the powers that be at the paper are trying to lighten up and have an opinion to attract a younger audience, further to the previous incident where it actually took a stand against US President Donald Trump.

We look forward to seeing more fun on other things, besides the weather updates.

Perhaps the unnamed person behind the Twitter account can try to liven up the upcoming Budget coverage next? That would be sorely needed.