Must Share News – Independent News For Singaporeans
Home People “Superstar” Steven Lim Gets Pranked By A Cross-Dressing Male Blogger After His...

With our dear  Uncle Steven Lim’s face splashed all over the Internet after his viral video, everyone should know that he is searching for a girlfriend by now.

In a video that garnered over 700,000 views, Steven Lim requested for pretty girls aged 18 – 22 to apply for the position of his “girlfriend” in order to cure his broken heart. (Reminds us of the song Hotline Bling by Canadian rapper Drake).

Mr Handsome, who claimed that people commented he looks like actor Tay Pinghui, also added that he has “business, money, really cool motorcycle and plenty of love and time to pei (accompany) you”.

the next part is even more exciting.

Uncle Steven took to Facebook to brag about the overwhelming response to his search for a girlfriend, adding that he might “be your best New Year present”.

But… what if a pretty boy auditioned for the role of his girlfriend instead?

Little did Steven Lim know he would be pranked by Gushcloud blogger Kife Wee.

To make his female identity more convincing, Kife even changed his display picture in Whatsapp to a gorgeous picture of him cross-dressing as a girl named “Baby”, whose status is “I hurt too.” #rofl.

Alas, an unsuspecting Steven took the bait and asked Kife whether “she” wanted to be his girlfriend.

Helloo u seem nice. Sorry i got no time for friends..u want be my girlfriend issit?*smiley face emoticon* 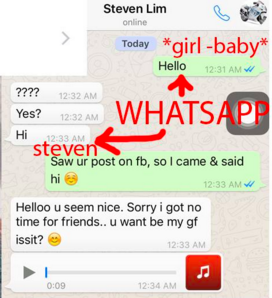 Kife later said that he felt bad for pranking Steven Lim and that the experience “was quite an enlightenment.”

Well Steven, better luck next time, and be careful with what you wish for. 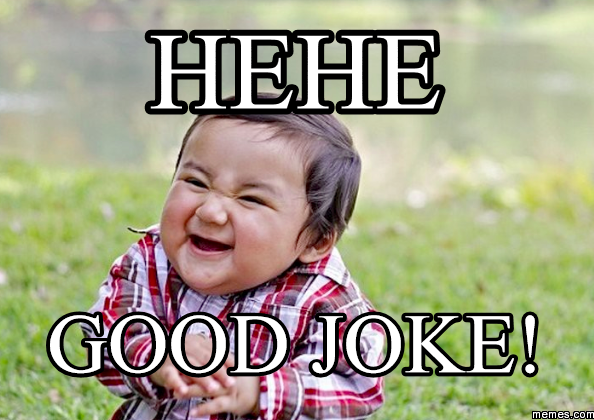