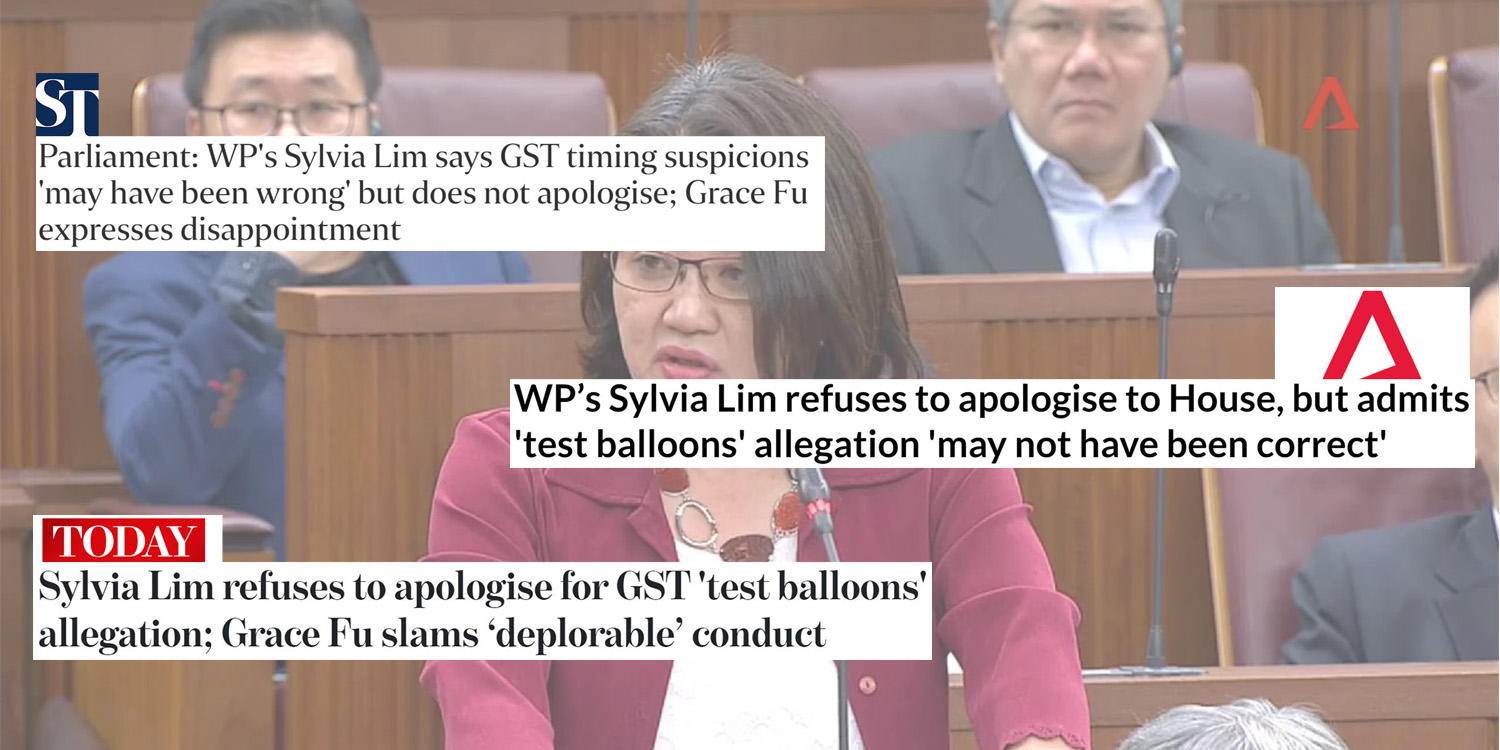 Out of all the unimportant things, the will-she-won’t-she of Sylvia Lim’s apology is arguably the most important.

Much ado had been made, many words have been said — or remain unsaid.

Sylvia Lim Refuses To Apologise In Parliament, Despite Pressure From 4 Ministers

The whole affair has been reported on widely, but has there been fair coverage of the whole saga in our mainstream media outlets?

Was journalistic objectivity achieved? We’ll leave that decision up to you, the discerning reader.

Let’s take a look at how mainstream media outlets broke the news, as well as netizens’ online reactions.

The Straits Times’ article was the least shared of the mainstream media outlets, garnering only 702 likes and 70 shares at time of writing.

ST opted for a relatively bare-bones approach for their Facebook caption, with a quote from Ms Lim about how she “may have been wrong” in her suspicions, but that she was “doing (her) duty as an MP”.

The article’s headline seems pretty neutral on first glance, although questions could be asked of Ms Grace Fu’s presence in it.

We suppose it could be ST’s way of representing the PAP Government’s standpoint on the issue.

The first three paragraphs are dedicated to reporting Ms Lim’s refusal to retract her allegations. Oddly enough, the next eight paragraphs go into excruciating detail about how disappointed Ms Fu was in Ms Lim.

Taken out of context, this might be argued as a poorly-concealed, partisan piece that priorities the views of the establishment. But it’s not.

The article actually summarises the edited transcript of the whole exchange, even keeping the order of speakers.

So while Ms Lim wasn’t particularly under-represented in this article, Ms Fu does seem to have a lot to say, doesn’t she?

Residents of the comments section also generally gravitated towards Ms Lim’s side, with many showing disdain for the PAP’s methods.

This comment put forth the argument that “Sylvia has done no wrong”, and she was simply “conveying public sentiment”. So asking Ms Lim to apologise was apparently “a new low”.

Since the comment garnered 262 Facebook reactions – half of the number on the article – it’s safe to say that it was fairly representative of public sentiment on this comments thread.

Others raised the issue of the “privilege of free speech” within parliament. And that asking Ms Lim to apologise for expressing her opinion, may “lead to poor debate in Parliament with fear and reservations”.

If ST’s approach to Facebook captions was simple, CNA’s was rudimentary.

Bearing nothing but a direct quote from the Workers’ Party chairman, the CNA adage seems to be “less is more”.

The article’s headline places the limelight squarely on Ms Lim, and is perhaps the best of the lot.

It presents the facts of the story fairly while including – as ST did – the possibility that Ms Lim was wrong.

CNA also dived into the reasoning Ms Lim provided for her allegations. She said that the Government contributed to her suspicion by its “non-denial of reports”.

Entire sub-sections of the article were provided to both Ms Lim and Ms Fu, with the final segment reporting the final speakers in the session, Finance Minister Heng Swee Keat and WP Secretary-General Low Thia Khiang.

Netizens who commented on this particular forum took Ms Lim’s side as well, with a healthy heaping of insinuation and sarcasm.

While others questioned if Ms Fu apologised too for “spending $800,000 on a bin”, in reference to the infamous bin centre incident involving the National Arts Council in 2016.

This netizen insinuated that Ms Fu’s actions were tantamount to “thug” behaviour within parliament.

Overall, the most balanced piece. But netizens somehow still generally swung towards taking Ms Lim’s side.

TODAY was the first mainstream news outlet to break the news, making their post on Facebook two hours before ST or CNA.

This probably contributed to the like and share count, clocking in at a whopping 1,200 likes and 323 shares.

A slightly clickbait-y title kicked off TODAY’s coverage, with the words “NOT SORRY” emblazoned on their Facebook post.

For some reason, TODAY decided to go with “deplorable” instead of “disappointed” as the de facto adjective for Ms Lim in their headline.

If you wanted to read just one article to keep yourself abreast of the situation, this is it.

TODAY took care to include several details, including an explanation of what a Committee of Privileges does.

Instead of presenting Ms Lim and Ms Fu’s words with paragraph after paragraphs of “he-said-she-said”, paraphrasing was used to great effect, serving to make the most coherent read.

The commenters reserved some of their vitriol for the PAP’s methods.

Like Ms Fu, they slammed the Government’s approach to seeking an apology from Ms Lim.

Some commenters were of the opinion that the events playing out resembled “primary school classroom” politics.

They also implored Ms Lim not to apologise. As they felt that the parliament is a place to “debate, defend and to clarify” points raised by candidates nominated by Singaporeans.

So even as TODAY delivered the most coherent read, the side which netizens once again took, was clear.

Are we there yet?

As in our previous article, we still harbour hope of other pressing issues being given more airtime in the media.

But with reports of Ms Fu seeking advice from the Attorney-General’s Chambers (AGC) prior to demanding an apology from Ms Lim, this saga looks set to drag on into the unseen future.