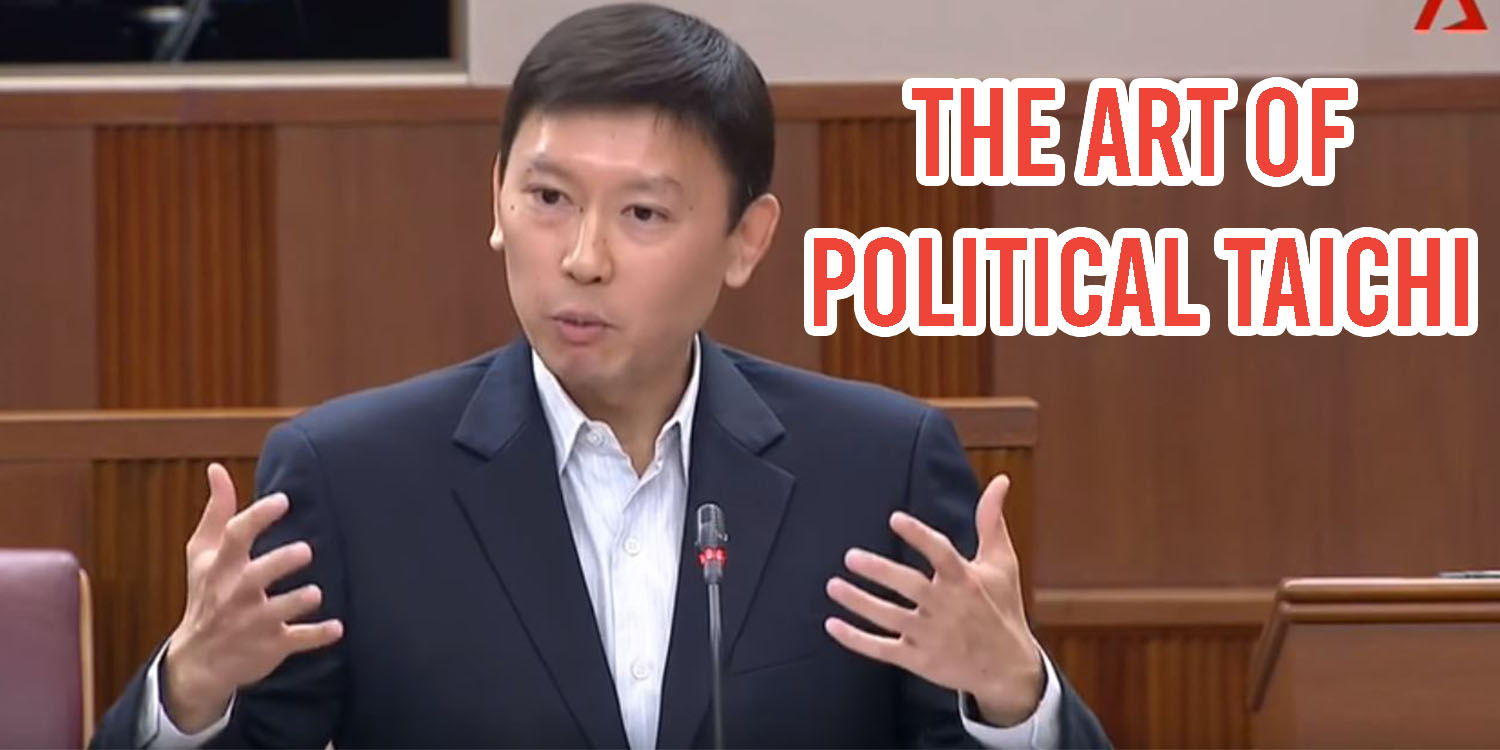 The art of political tai chi, also known as dodging and deflecting the blame, is a crucial lifehack for most politicians, almost as elementary as knowing that 2 + 2 is 4.

Senior Minister Of State Chee Hong Tat displayed his prowess in the art at a recent parliamentary debate with Non-Constituency Member of Parliament Leon Perera over the alleged editing of parliamentary videos. In fact, he’s so adept, we managed to learn a few things just by watching.

You can check out their full 7-minute duel of words here, and read on for a summary of five techniques that make Mr Chee a true master of political tai chi.

1. You must siam crucial questions

The first trick is to answer only the simple questions and ignore the difficult ones.

Mr Perera: Why can’t the parliament make its own live feed, video recordings and searchable archives like in other countries?
Mr Chee: Singapore doesn’t have a live feed for parliamentary debates is because “this is not in great demand”.

Our verdict: Even if a live feed is not in demand, Mr Chee does not explain why the parliament is unable to make video recordings and searchable archives.

Mr Perera: Why does a corporate entity [Mediacorp] own the copyright to a record of parliamentary proceedings?
Mr Chee: Mr Perera is incorrect to mention that the copyright belongs to Mediacorp. Instead, the copyright “belongs to the government”.

Our verdict: To truly master the art of tai chi, one has to answer the occasional question. Mr Chee answered this question.

Mr Perera: Why does a corporate entity [Mediacorp] have the power to choose what, when and how to edit the footages of parliamentary debates before uploading them?
Mr Chee: What Mr Perera said about “edited” Parliamentary debate footages is untrue. All footages are uploaded and edited only to sort them out based on the speakers and reply given.

Our verdict: Mr Chee defines how footages are edited and uploaded, but does not address why Mediacorp is given the power to decide instead of the government.

By addressing only parts of the question, we can deflect the attention to unimportant issues. You can even enjoy the added bonus of evading awkward questions more easily.

2. Attack is the best form of defence

Consider this move as a follow-up to the first technique. As your confused opponent scrambles to pick out which question you didn’t answer, you must find your opening to attack.

So if Mr Perera feels that certain examples have been left out, maybe he can give me some specific examples? We will certainly look into those.

Doing so will surely pile the pressure on your opponent. Directing the burden of proof to your sparring partner strengthens your defence with a counter-attack.

3. If you cannot convince, confuse

When you meet a formidable opponent, you have no choice but to use your secret weapon. Confusion.

With Mr Chee exerting his political tai chi, he probably didn’t expect Mr Perera to be able to provide an example of an edited parliamentary video.

However, Mr Perera does indeed whip out a relevant example.

There was a specific example that a clip was put up in relation to the Presidential Elections Act debate, if my memory serves me well February and…there were certain bits removed.

I actually communicated with Mediacorp and through the correspondence they actually made a rectification and put up a different clip.

I think the MOS himself has conceded that there is a certain degree of editing so I mean those decisions are decisions that involve a very high level of discretion.

To be fair, despite Mr Perera’s example turning out to be inaccurate, he managed to cut through Mr Chee’s tai chi to reiterate the question.

Does this spell the end for Mr Chee’s evasion? On the contrary.

Mr Chee dodges the bullet by defining editing for a second time.

I want to reiterate the point that when I say editing, I think my definition of editing might be different from what Mr Perera was alluding to.

When I say editing, what I meant was Channel NewsAsia will take the footages and they will sort them…so as to make it more convenient for viewers to search and to assess these footages.

The editing which is done is not to remove certain parts of what is said.

If you’re unable to convince your opponent, you can always confuse them using language with double negatives like “not to remove”. Including less relevant details also helps to complicate what you’re talking about.

As a sure-fire way to announce your victory, you must dig deep for classic comebacks to discredit your opponent.

Mr Chee rounds off his counter-attack with a warning to Mr Perera,

And if no problem exists I think one should not go round looking for imaginary problems to tackle. That’s like having a hammer and then wanting to knock everything around you as though they’re nails.

We see what you did there Mr Chee, nicely played. Since the Worker’s Party’s symbol is a hammer, we really appreciate the subtlety.

Humble bragging about your victory on social media is sure to garner you the support of the masses.

You can even bend the narrative to suit your agenda as you please. Adding implied allegations of a “partisan” nature may rally your supporters to your cause.

A Political Taichi Master Is Born

We can’t wait for Mr Chee to impart more master level techniques to us with his performance against other worthy opponents in parliament.