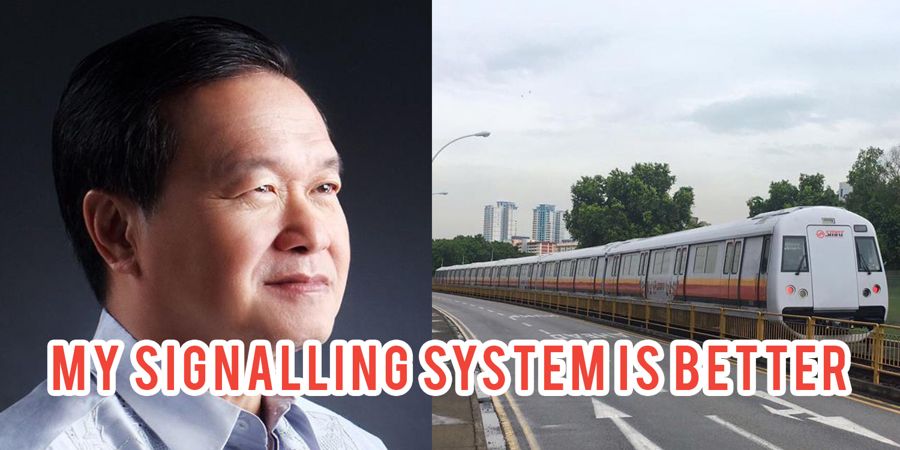 Although he failed to win the 2011 Presidential Elections, Mr Tan Kin Lian still tries his best to improve the lives of Singaporeans. Following the numerous train disruptions in recent time, the former Chief Executive Officer of NTUC Income has stepped forward to provide his own feedback on how the current rail system can be improved.

In a Facebook post on 29 Nov, Mr Tan shared that he had devised his own simulation of a signalling system. The ex-presidential candidate claimed that his system “should perform better” and is cheaper than SMRT’s new Thales system, which came under scrutiny following the train collision at Joo Koon Station. 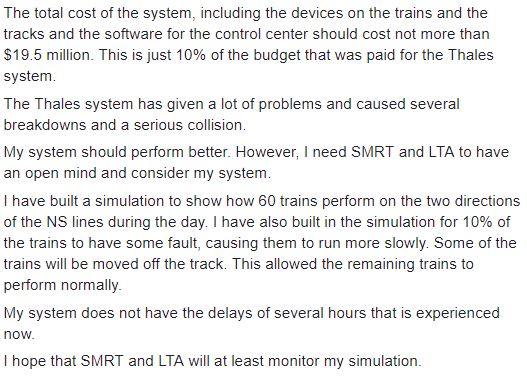 Say goodbye to hours of delay

In Mr Tan’s simulation, he assumes that there are 60 trains running in both directions on the North-South Line. During peak hours, trains will be dispatched at 2 minute intervals while during non-peak periods, the dispatching time will be 3 minutes. Each train is given 30 seconds to load and unload passengers at each station. The trains will travel an average speed of 60km/h unless there is a train 500m in front of it. If two trains are closer than 500m apart, the train’s collision avoidance device will apply the brakes to ensure the two trains do not collide.

If you take a look at his simulation system, you will be able to see how far the train has traveled and whether it is behind or ahead of its scheduled time.

Most of the trains arrived a few seconds ahead of time, while 3 trains were late by at most 2 seconds. If a train is ahead of schedule, it’s speed will be reduced and conversely, increased if it is late. The system refreshes every few seconds so you will be able to see the changes in the train speed.

In the event that a train is behind time for more than 2 minutes, the train encountering the fault will be removed from service.

If you are a train otaku, you would be able to see the similarities between Mr Tan’s system and Thales’ Communications-Based Train Control (CBTC) system. Thales’ system employs a similar safety breaking distance procedure and communication system.

However, the only difference is that Mr Tan’s system has already taken train faults into account as some trains will be slowed down drastically. Despite the delays, Mr Tan’s system does not show any severe disruptions.

But will it actually work?

Mr Tan also claims that if the government and SMRT were to use his system, it would only cost them 10% of the S$195 million they paid Thales. Sounds like a sweet deal to us.

Since we aren’t train experts, we aren’t sure if Mr Tan’s system is a viable alternative. We’ll just have to wait for an actual train engineer to analyse the admittedly impressive stats churned out by his simulation system.