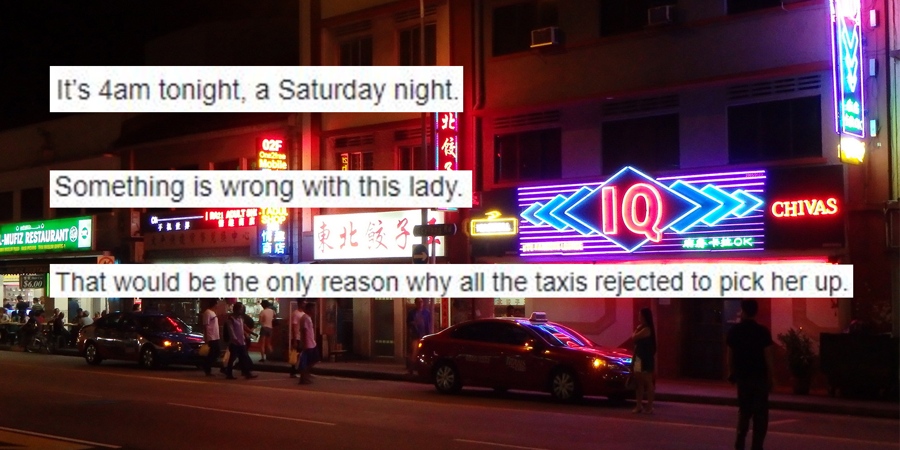 Cab drivers have seen it all, as they ferry people from all walks of life from dusk till dawn.

This cabby, however, took to Facebook to detail a gripping story of how his encounter with a sex worker who walked the streets of Geylang, changed his life forever.

You can read a screenshot of his post on Sunday (11 Mar) here in full, or skip ahead for our summary below. 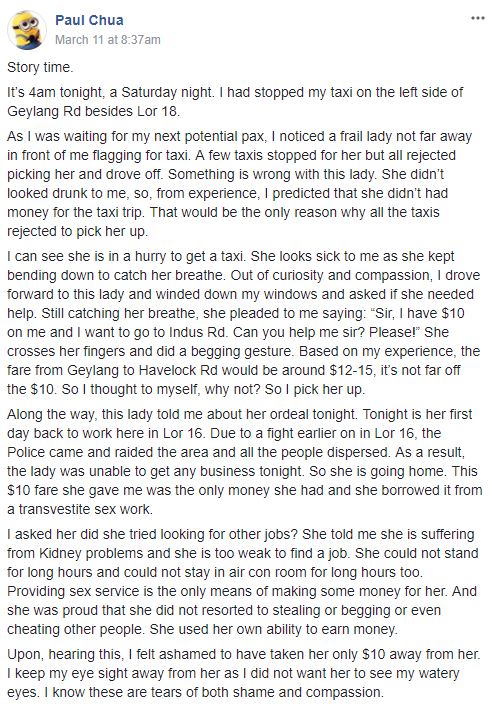 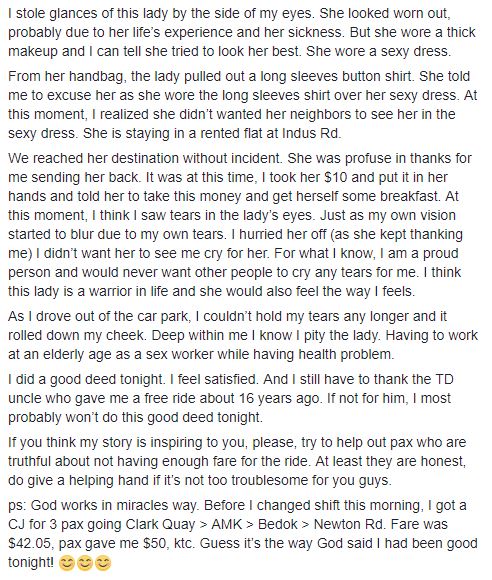 In the wee hours of Sunday morning (11 Mar), Mr Chua decided to stop his taxi on the left side of Geylang Road, beside Lorong 18. 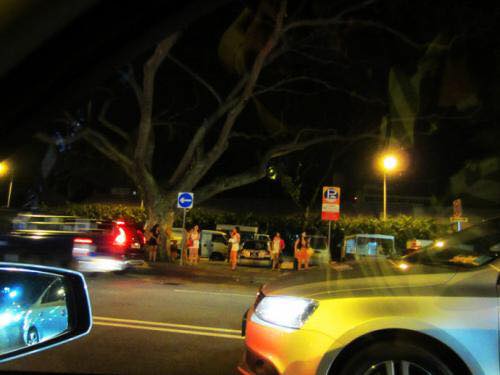 As he waited for his next passenger, he noticed a “frail lady” attempting to flag a taxi.

Although a few taxis stopped for her, they all rejected picking her up and drove on.

As Mr Chua thought she didn’t look drunk, he predicted that she didn’t have any money for the taxi trip.

This could have explained all the rejections she faced from the other cabbies.

A lady who appeared sick

Driven by curiosity and compassion, the taxi driver wound down his windows and inquired if she needed help.

To which the elderly lady replied,

Mr Chua wrote that she looked sick as she kept bending down to catch her breath.

Perhaps out of pity, Mr Chua decided to pick her up as the fare from Geylang to Havelock Road would be around $12-15, which wasn’t too far off from $10.

A fight and police raid at Lorong 16

As he drove off, the unnamed lady then shared her ordeal with him.

Apparently, she’d encountered a fight at her first day back to work at Lorong 16. A fight involving a dramatic police raid which made her unable to get any ‘business’ tonight.

The $10 fare she handed to him was actually a loan from her friend — a transvestite sex worker.

Mr Chua then asked her if she tried looking for other jobs, to which she confessed that she was suffering from kidney problems.

As a result of her condition, she was too weak to be otherwise employed and could not even remain standing for too long.

She viewed providing sexual services as the “only means of making some money”, and was proud that she did not resort to “stealing or begging or even cheating other people”.

Most importantly, she wished to rely on her own ability to make ends meet.

Tears of shame and compassion

At this point, Mr Chua understandably felt bad for taking $10 away from her, as he wrote,

I keep my eye sight away from her as I did not want her to see my watery eyes. I know these are tears of both shame and compassion.

He described her as looking “worn out”, probably due to her health condition and life experiences.

Despite this, she wore thick makeup and he could tell that she “tried to look her best” in her “sexy dress”.

The lady then pulled out a long sleeved button-up shirt from her handbag, which she wore over her dress.

Mr Chua belatedly realised it was because she didn’t want her neighbours to see her in her ‘work attire’, as she was staying in a rental flat at Indus Road.

A proud warrior in life

As the ride came to a close, Mr Chua writes that the lady thanked him profusely for sending her back. He then took her $10 note, and placed it back in her hands, telling her to get herself some breakfast.

At this moment, I think I saw tears in the lady’s eyes. Just as my own vision started to blur due to my own tears. I hurried her off (as she kept thanking me) I didn’t want her to see me cry for her.

Citing his personal experience of being a “proud person” too, he stressed that he would never want anyone to “cry any tears” for him.

He thought the lady would feel the same as she’s a “warrior in life” in her own way.

But as he drove out of the carpark, he couldn’t hold his emotions in any longer.

Mr Chua finally shed a tear – or two – out of pity for the elderly lady as he sympathised with her struggle of working as a sex worker despite her age and health problems.

The kind taxi driver credited his good deed to another taxi uncle who gave him a free ride 16 years ago.

And concluded by encouraging other cabbies to do the same for people who may be less fortunate.

After all, good things may come to those who do good in return. 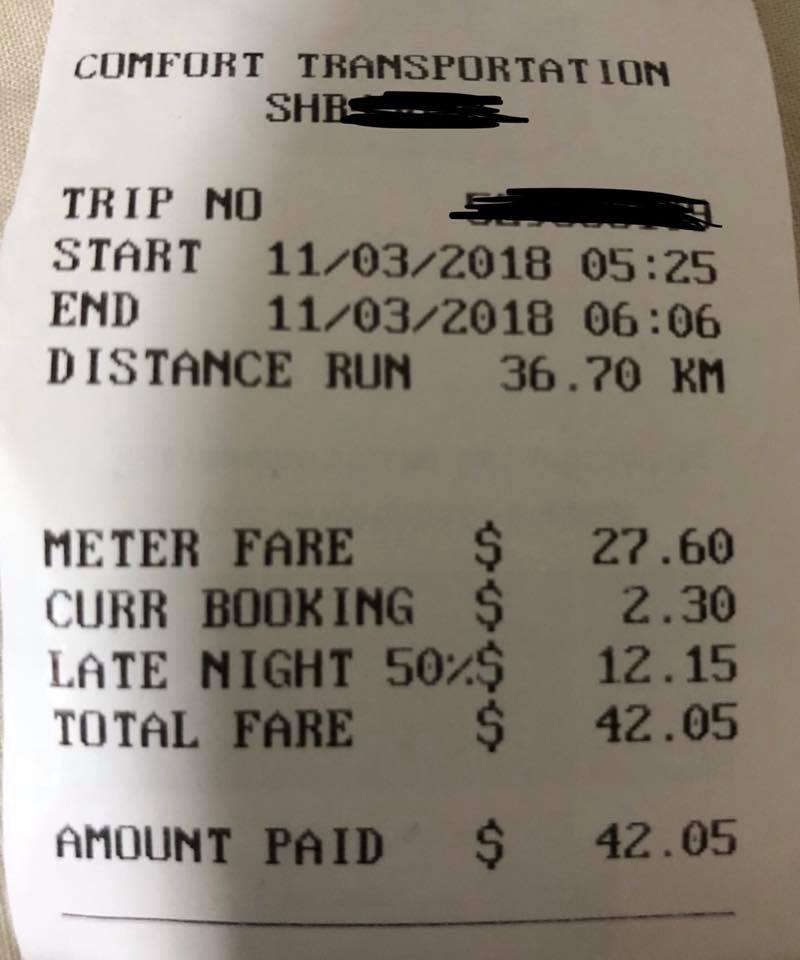 Later that morning, he said he managed to clinch a lucrative job amounting to a $42.05 fare, but received a total of $50 from his customers instead.

Guess it’s the way God said I had been good tonight! 😊😊😊

Netizens took to the comments section to praise Mr Chua for his kind deed.

Some said that he received “instant karma” for being a good Samaritan and helping this lady in need.

Others said that he continued to inspire and educate them at the same time with his touching posts.

Turns out, Mr Chua’s no stranger to viral Facebook posts.

His previous story – about how he received a free ride from a kind cab driver back in 2002 – has gone viral before.

Impressed netizens have asked him to “keep it up” and continue inspiring others with his stories.

Due to the nature of their jobs, cab drivers are privy to a vast collection of stories from people who’ve fallen between the cracks.

As most of us are caught up with day-to-day concerns of everyday life, it’s not often that stories like this come to light, or make it to our mainstream narratives.

Perhaps when we get into our next cab, or encounter someone else in need, we may be tempted to be a bit more like Mr Chua.

After all, a little kindness may make someone’s day, or leave an indelible mark on their lives forever.