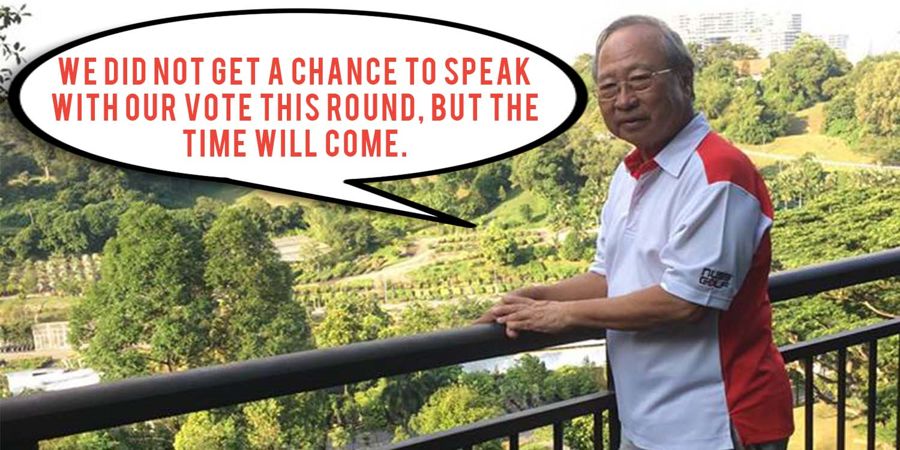 TCB Congratulates Mdm Halimah On Her Victory, But Sends An Ominous Message As Well

Despite being unable to run in the Presidential Elections this time around, Dr Tan Cheng Bock extended his congratulations to Mdm Halimah in a Facebook post on 13 Sept. However, his attempts at cordiality failed to mask his underlying anger, having lost out on the nation’s highest position for the second time in the row.

In fact, it seems like Dr Tan was more preoccupied in sending an ominous warning to the government, instead of congratulating Mdm Halimah. He warned that there will be backlash from Singaporeans in the next General Elections.

How do we know? Well, let’s take a look at his post. 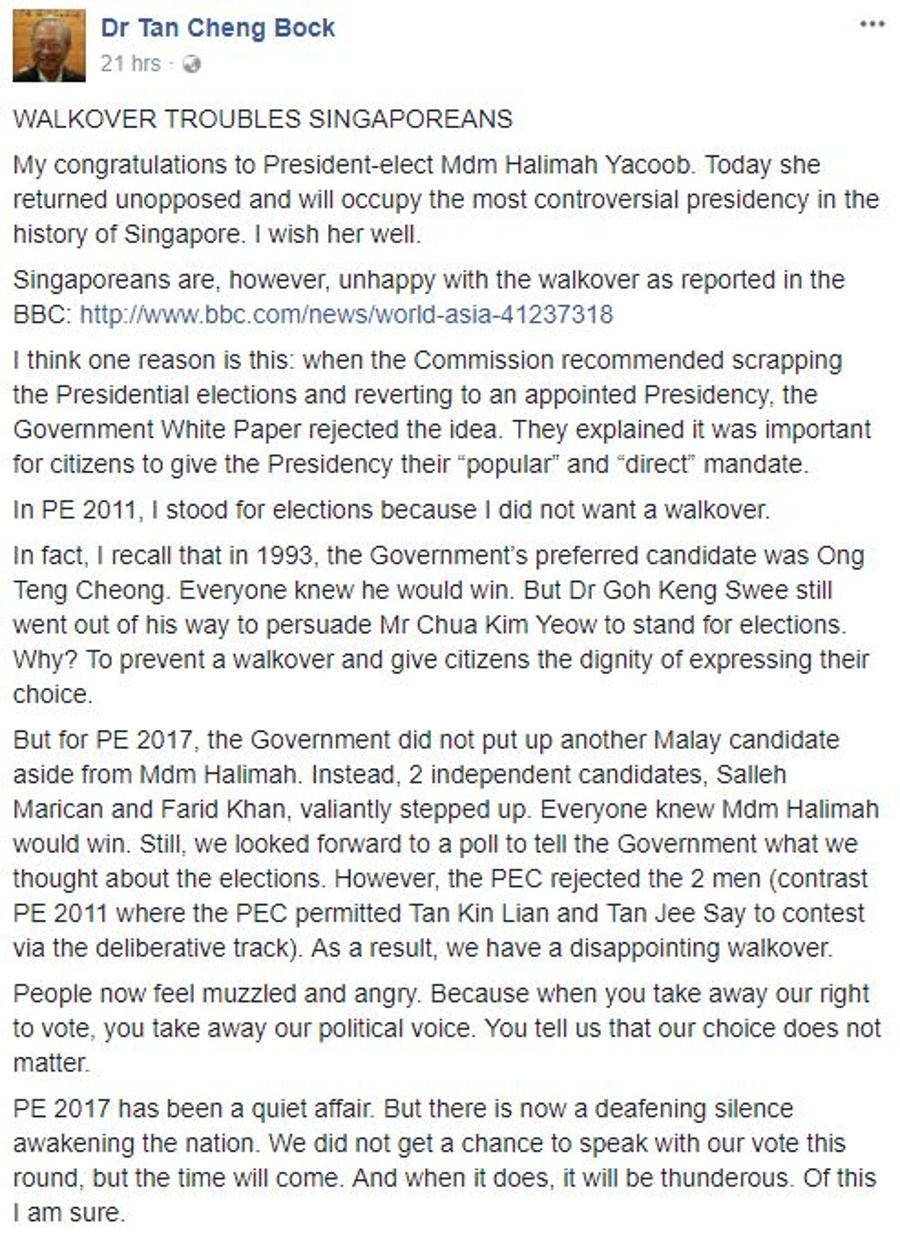 Pissed that no one blocked Halimah

Now if the intent of a message was to convey well wishes, then the most important thing would probably be to ensure that the name of the recipient is spelt right.

It seems that Dr Tan was preoccupied with other thoughts, as he failed to see that he spelt Mdm Halimah’s name wrong.

Beyond the spelling error, TCB’s congratulatory statement was rife with sarcasm as he described her victory as “unopposed” and the “most controversial”.

However, the ex-presidential candidate chose to talk about about what he feels is the root cause of all the unhappiness: the inability to vote for our President.

He shared that the government could have avoided all of this anger, if they had chosen to do one of two things.

The first, would have to been to accept the Constitutional Commission’s recommendations to revert the elected presidency back to an appointed one in 2016. However, Dr Tan pointed out that the government rejected this idea because it felt that it “was important for citizens to give the Presidency their ‘popular’ and ‘direct’ mandate”. 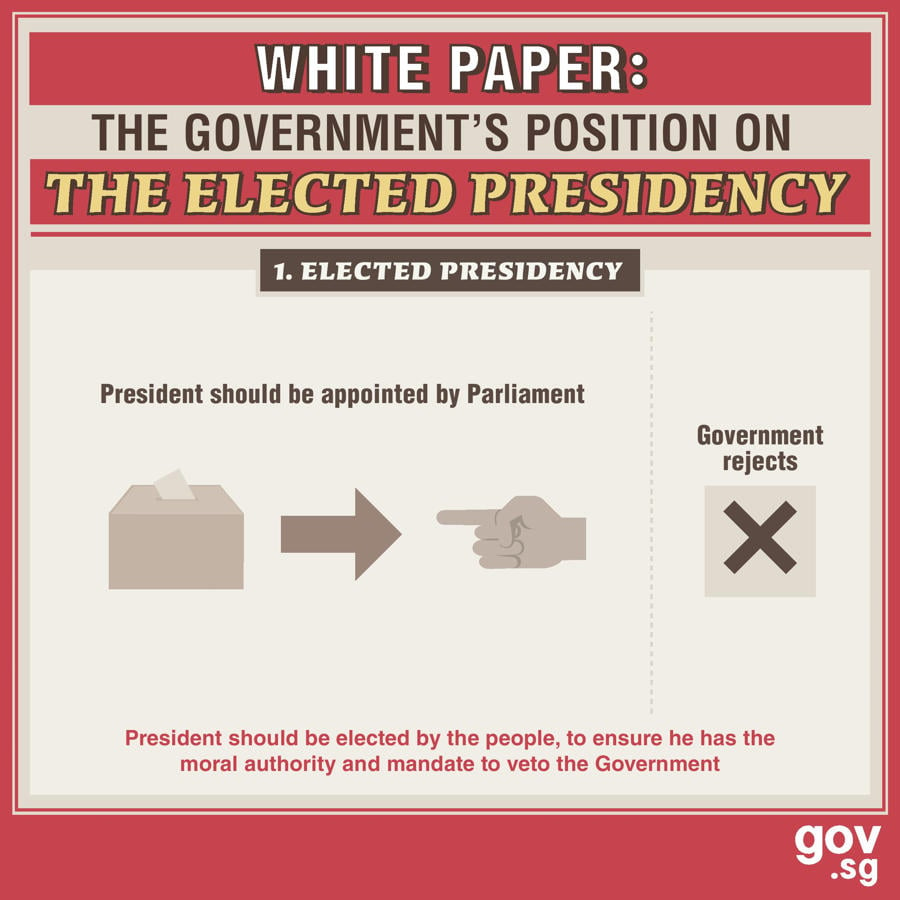 This elections, the government only chose to send Mdm Halimah instead of two Malay candidates from Parliament. Singaporeans were given a glimmer of hope when Mr Salleh Marican and Mr Farid Khan threw their names into the hat, only to be disappointed as they were deemed unsuitable at the final hurdle.

With a lack of eligible candidates to contest against Mdm Halimah, Singaporeans were denied the chance to choose the next President. As such, the government’s favoured candidate became the 8th President of Singapore by default.

Dr Tan’s example is not the first time that the government has failed to live up to its promises.

Remember when PM Lee assured Singaporean reporters at an Asean Summit that there would be enough “qualified Malays” to run in a reserved election? Well, where are they now?

In the end, the two candidates that stepped forward from the private sector were deemed by the Elections Department to be unqualified as they failed to hit the minimum shareholders equity.

Will Bock Have The Last Laugh?

The reserved Presidential elections is the second incident this year to have gained global traction after the Lee Saga. It has deeply angered some Singaporeans who felt that we are no longer a democratic country.

As a parting shot, albeit cryptic, Dr Tan warned that while Singaporeans did not get a chance to vote and voice their opinions in this elections, the time will come when Singaporeans will be able to. We assume he means the next General Elections.

Given the current state of unhappiness with the incumbent ruling party, there may be some backlash from Singaporeans.

But will there be any strong candidates to compete with the incumbent government? Well if this Facebook reader gets his wish, we might just have a good fight on our hands.