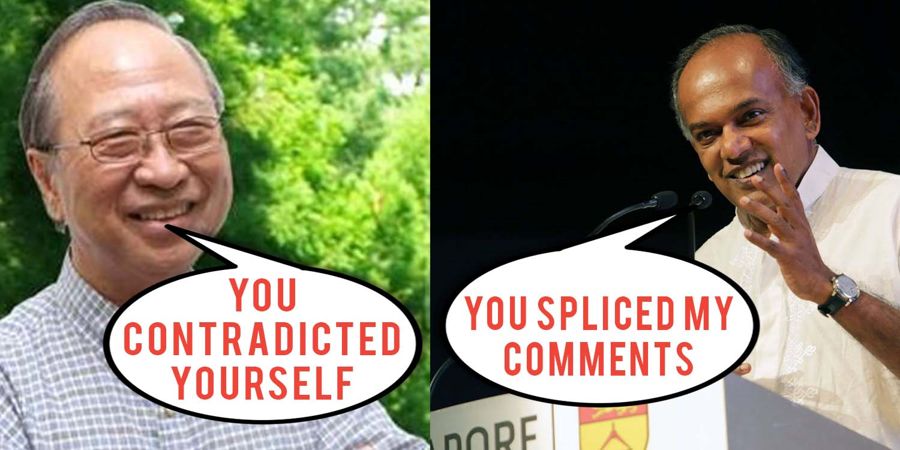 A war of words between ex-lovers is always a sight to behold. But when former political comrades engage in a robust debate on social media, you know you have to bring out the popcorn.

Over the weekend (8-9 Oct), ex-PAP colleagues Tan Cheng Bock (TCB) and Law Minister K Shanmugam decided to lock horns in an argument that spanned 3 Facebook posts. The reason for the spat? The comments made by the Law Minister on the Reserved Presidential Elections in Parliament on 3 Oct.

During the Parliamentary sitting, Workers’ Party (WP) Chairman Sylvia Lim’s sought clarifications on whether the leaders of PAP had misled the house into thinking that the decision to count from President Wee Kim Wee was a legal one. This question was specifically aimed at PM Lee Hsien Loong, DPM Teo Chee Hean, and Minister in the Prime Minister’s Office Chan Chun Sing.

However, it was Law Minister K Shanmugam who retorted on their behalf. He replied snidely, saying that “the Government [could] decide” — a fact that Ms Lim would have known if she had read the judgement passed by the Court of Appeal during TCB’s appeal. Mr Shanmugam then turned tables on Ms Lim by suggesting that Ms Lim “should know all about misleading Parliament”.

With Ms Lim at a loss for words, we thought that Mr Shanmugam had nailed the coffin shut on this political debate, but boy were we wrong.

After being blocked out from running in the 2017 Presidential Election and having his appeal dismissed, TCB has been waiting for an explanation on why the Government chose to recognise Dr Wee Kim Wee as Singapore’s first elected President, instead of Mr Ong Teng Cheong.

He finally got a response on 3 Oct, after Ms Lim’s motion to discuss the Reserved Presidential Election was finally heard in Parliament, having failed to win the random ballot twice.

However, his ex-colleague TCB took to Facebook to suggest that the Law Minister was himself guilty of being misleading.

In the post on 7 Oct, TCB raised these two observations:

(i) Law Minister K Shanmugam appears to have contradicted himself

While Mr Shanmugam suggested that Ms Lim was the only one to have have misled Parliament, TCB pointed out that the Law Minister seems to be of a similar feather. In the parliamentary sitting, Mr Shanmugam defended his party by quoting what he said at a dialogue session on 15 Sept 2016.

Mr Shanmugam had said that the choice to start from Dr Wee was a policy rather than a legal one. So confident was the Law Minister that he even egged Ms Lim to “confront [him on] anything else [he] might have said”.

Well, it seems that TCB heard the challenge loud and clear. Dr Tan reproduced the rest of Mr Shanmugam’s speech at the dialogue session and found that the Law Minister’s statement in Parliament on 3 Oct was contradictory.

At the initial dialogue session, Mr Shanmugam said that:

“There are also some legal questions about the elected presidency and the definition and so on, so we have asked the Attorney–General (AGC) for advice. Once we get the advice, we will send it out.”

However, in the parliamentary sitting, he told Ms Lim that:

“this government, as a rule, generally, does not publish legal opinions that it gets.”

The ex-PAP member also questioned why PM Lee, DPM Teo, and Minister Chan kept quiet, since the allegations were made at them.

Not one to turn down from a verbal challenge, Mr Shanmugam replied Dr Tan the following day (8 Oct) in a Facebook post. The Law Minister argued that Dr Tan had spliced his comments to make it seem that he was contradictory.

Mr Shanmugam clarified that “it” he was referring to was “making the Government’s position (and not the AGC’s advice) public”. He then downplayed Dr Tan’s outburst as being “bitter” before condemning his “elaborate charades”.

As if painting Dr Tan as being sour grapes wasn’t enough, the Law Minister also responded that the reason why the other PAP leaders did not speak up was because of the lack of time — a fact that Dr Tan should be well aware of being a former parliamentarian himself.

“Surely as a former parliamentarian he knows that adjournment motions have strict time limits. The MP moving the adjournment motion has up to 20 minutes; and someone else has all of 10 minutes to respond. That’s it. As Law Minister, I responded on behalf of the Government.”

It seems that Dr Tan was prepared for a rebuttal from Mr Shanmugam as the ex-MP replied a mere 2 hours later.

The former PAP backbencher had no comments on Mr Shanmugam’s clarifications on what he said at the dialogue session and what he said in parliament.

However, he did clarify that while he understood the allotted time for parliamentary debates, he could not understand “why the PM stayed silent” since it was “his statement [that] was being challenged”.

Dr Tan also took the opportunity to reassure his former colleague that he remained “cheerful” about the matter but the same could not be said about the incumbent Law Minister.

“On my part, I can assure the Minister that I am still cheerful. But I think the Minister, who said “I’m happy to be confronted with anything else I might have said” didn’t sound so happy when he saw my questions”.

Rather than prolong the debate further, Dr Tan said that he would allow readers decide if he “had unfairly misquoted [Mr Shanmugam]”.

Is it finally over?

It is quite a petty sight to see two people with political pedigree argue over social media. However, it appears that the argument may be over after Mr Shanmugam chose not to reply Dr Tan in his latest post today (9 Oct).

If so, this would mean that Dr Tan has finally scored a victory over the government though, we are pretty sure that Dr Tan would probably have wanted the victory to have come 6 years earlier — in the 2011 Presidential Elections.