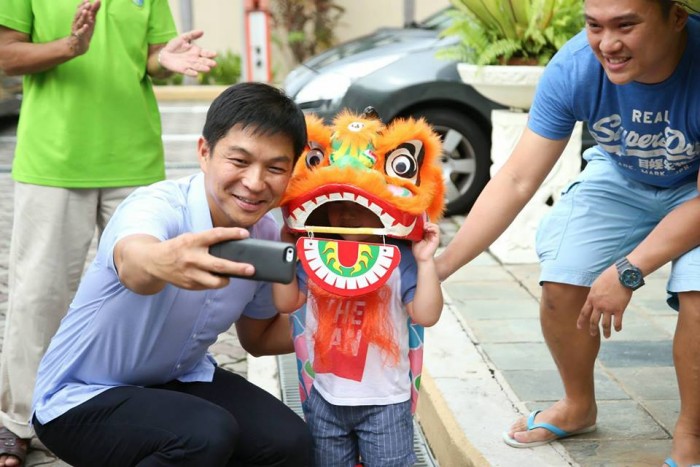 The new cabinet will commence their duties with effect from October 2015, but, hardworking Tan Chuan-Jin seems to have already started his job as Minster of Social Media.

That’s right, he’s been very busy on his Facebook, paying tribute to his colleagues.

Let’s take a look at what he has done in the past 48 hours.

TCJ has seemingly volunteered himself to be the cheerleader of his PAP colleagues, showing all his encouragement and support as they run the next lap.

Come to think of it, imagining him as a cheerleader isn’t that hard. He already has a uniform (white-on-white), all he needs now is a red and blue pom-pom in each hand, and he’s good to go!

Before that, he thanks Minister Heng for all his efforts in his previous post as Education Minister, and expresses the importance of the education ministry and its heavy responsibilities.

“I have said to many a teacher and I’d say it here again, it is possibly one of the most important public service responsibilities because of the impact one can have.”

Much inspiration. Many wow. :’)

Along with Mr Heng, he also mentioned a few others:

His enthusiasm is amazing, but why didn’t he tag all these people?

Aside from recognizing the efforts of Mr Khaw Boon Wan in his previous housing portfolio, TCJ also helped our incoming Transport Minister to promote his blog — once again by sharing it on his Facebook timeline.

To all you potential bloggers out there who are in need of some exposure, now you know who to look for! 😉

He also gave a warm welcome to his new team players with his cheery web voice.

Oh and he FINALLY learnt about the tagging function, but wait…he didn’t tag EVERYONE. WHY.

As Minister of Social Media, he should very well make sure that his tagging is consistent. Tsk Tsk Tsk.

4. Has High Expectations Of MFA

Starting off with a deep statement, he delves into showing his gratitude “to many, but particularly” the “leaders and colleagues in MFA”.

We don’t always see ministers thank the behind-the-scenes people, but it’s nice to see our Social Media Minister doing so.

We’re sure all those unseen warriors are touched by his gratitude-filled post.

To show his utmost gratitude, he shares outgoing Foreign Affairs Minister Shanmugam’s post while thanking a few others in the process. Seems like he has some high expectations from the next team.

“I am sure Vivian, Jo and Maliki will continue to do this and more!”

Is this his indirect way of saying that a good job wasn’t done previously?

Oh and he forgot to tag people again. Hmph. >:(

As seen, he thanked the MCCY team for all the hard work they put in, and alluded to the difficulty in setting up new ministries.

However, he just had to mention that he was the President of the Singapore National Olympic Council, and that working with them during the recent SEA Games, was “a great testimony to their leadership and impressive commitment”.

In other words, he just wanted to show that he was in some way involved.

6. Reminded Everyone That He IS Young

AS USUAL, he shares the post of the person he is going to thank and then thanks them.

So this time, it was outgoing Environment and Water Resources Minister Vivian Balakrishnan and his efforts in water security for the country.

However, he side-tracks, and he highlights that he is still young.

“While I am not that old, I am old enough to remember what real flooding was like especially along Dunearn Road while going to school.”

We get it TCJ, you are young.

And to double confirm his young-ness, he used some young, hip slang.

As you can see, he added in a “well done bro!” to incoming Environment and Water Resources Minister Masagos Zulkifli.

But what about Amy Khor who is under the same ministry as well? She’s mentioned in the same sentence and she doesn’t get a well done?

Also, he forgot to tag… AGAIN.

After much analyzing, we have finally found out the root cause for the sudden influx in the sharing of the FB posts.

TCJ is a Care Bear.

There is no other reason which could explain this caring and sharing phenomenon which has taken place. He has also shown great gratitude and enthusiasm, which all just leads back to being a — Care Bear.

We are pretty positive his motto is “Sharing Is Caring”.

However, he has a tagging problem which he should seriously look into. The inconsistency in tagging is annoying.

As the new Minister of Social Media, we hope he looks into this tagging situation and makes the necessary improvements.