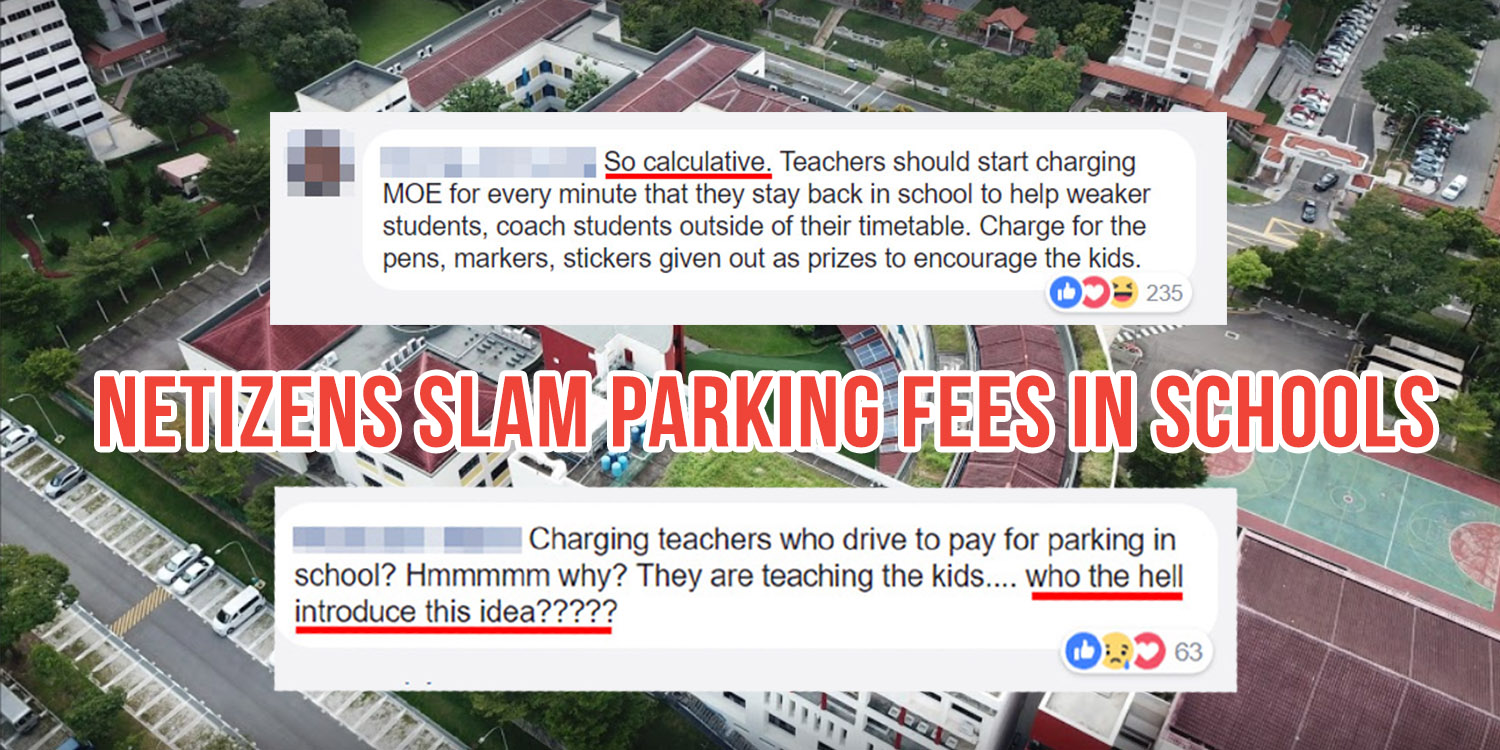 Starting 1 Aug, teachers who drive to work may find their wallets considerably lighter.

That’s when they will have to start paying to park their vehicles on campus.

A moment of silence for the loss of free parking for our dedicated educators.

According to The Straits Times, these are the pricing plans for on-campus parking:

The rates were determined based on HDB monthly season parking fees for non-residents.

It’s not just teachers who will be affected by the new policy; The Straits Times says that the following groups of school staff might have to pay up too:

However, ad-hoc visitors parents or volunteers will be exempt from the new fees.

Payment is deducted monthly from one’s salary, MustShareNews understands. Teachers who pay will then be guaranteed a lot in the school through a reservation system.

This will help the Ministry of Education (MOE) save costs on installing gantries and electronic parking systems at schools.

But the move does little to help educators save costs:

What teachers have to say

Perhaps the most important opinions are those from people actually affected by the policy: teachers and school staff themselves.

A secondary school teacher of more than 5 years told MustShareNews that he was deeply upset by the new policy.

I’ve never felt so unappreciated. The fees aren’t forgiving either: seems like they are just trying to milk us dry. Why are we being punished for going to work?

A junior college teacher questioned the purpose of the new rules, asking

I do not think that teachers would take advantage and just park their cars in schools for extended period of time to enjoy the free parking that we have now. And if the [money] collected goes back to the school, what would it be used for?

A part-time teacher of more than 10 years revealed that she would stop driving to school.

For me, I don’t even go to school everyday, [but] only for a few hours. Yet according to MOE, I can’t be in the ad-hoc category as I go to school for 3 days. Stupid system. I don’t think I will drive.

The Internet is enraged

And they have the support of netizens, who reacted to the news the same way they did the last time the issue of parking fees in schools was brought up:

Some questioned why the Ministry failed to recognise the innumerable contributions of our educators.

Others argued that many teachers used their own money to help and motivate students, without claiming reimbursement. These netizens see the new policy as a failure on MOE’s part to appreciate its staff.

A handful agreed that the decision was economically sound but felt it was too calculative.

But a small minority did not react negatively to the news.

They welcomed the closer scrutiny given to public sector spending, pointing out that teachers who don’t drive were denied the benefit of free parking. 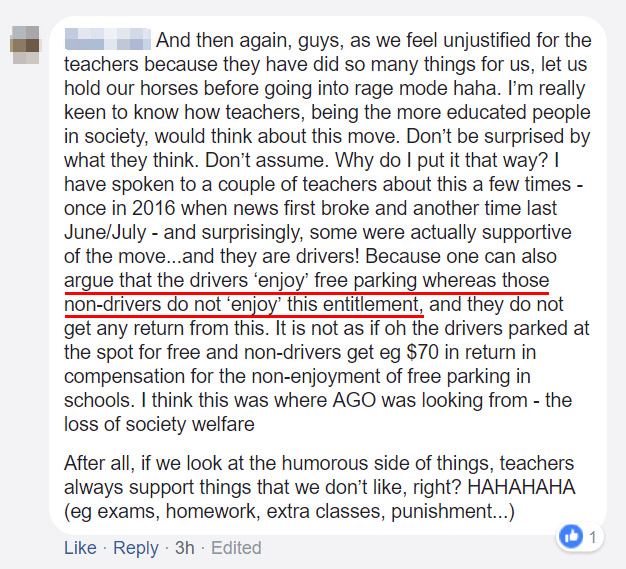 While netizens were divided on the issue, albeit unequally, most agreed that the next comment was as entertaining and far-fetched as could be.

Why fees, why now?

The debacle over parking fees in schools comes after the Auditor-General’s report for the financial year of 2015/2016.

The report highlighted how staff in some educational institutions were parking for free or paying a fee below the market rate.

The report describes such practices as being almost equivalent to “providing hidden subsidies for vehicle parking”.

Given these findings, MOE had no choice but to act.

The Ministry explained on Monday (26 Mar) that “allowing school staff to park for free constitutes a taxable benefit” and that the new policy was “an appropriate treatment”.

While we may find it petty, there is truth to that statement.

MOE’s decision comes on the heels of changes introduced in the Institute of Technical Education and Singapore’s five polytechnics.

All statutory boards under MOE, they have been charging staff season parking rates ranging from $80 to $110 since October 2017.

To pay or not to pay

Unfortunately that isn’t the question anymore; since it’s official.

But we’re sure that the debate will rage on for weeks to come.

Should teachers, like the general population, be expected to pay for their usage of parking lots at the workplace?

Can their countless sacrifices in nurturing the leaders of tomorrow possibly be exchanged for subsidized parking rates?

We’ll be chewing on that thought for now.

It will be interesting to study the effect of this policy on our teaching force.

After all, the annual resignation rate has gone up over the years: an average of 1,000 teachers left the force every year between 2011 and 2016.

That’s nearly double the figure from 2000.

We just hope that the new policy won’t exacerbate this trend.