A video of a Temasek Polytechnic student having a feud with other students during a lecture went viral on Reddit on Wednesday (19 Apr).

Perhaps even more bizarrely, someone also posted an insanely catchy remix of Kendrick Lamar’s Be Humble, as the student involved decided to quote its lyrics.

Nicknamed “Bumblebee” by netizens due to his distinctive striped black and yellow shirt — which is a look you can steal here.

This student appears to be confronting two other boys who allegedy “looked down” on him due to his academic background.

The entire fiasco was recorded on Instagram by many other students in the room, providing us with multiple angles of the drama.

In fact, someone actually compiled an 18-minute video of the whole fiasco.

So if you have 18 minutes to spare, here’s the video:

But frankly, no one has that amount of time to spare on a schoolboy fight, so let us help you breakdown what allegedly happened.

Quarrel was mainly over academic background

Student ‘Bumblebee’ clashed with two other students, one dressed in black and the other dressed in a red singlet.

They had a brawl over one main issue — Bumblebee’s academic background.

We can’t confirm which of the two confronted each other first, so let’s begin with the guy dressed in black.

In the video, Bumblebee reminded the student in black that he was “from ITE” and that he “still can study better than you (them)”. 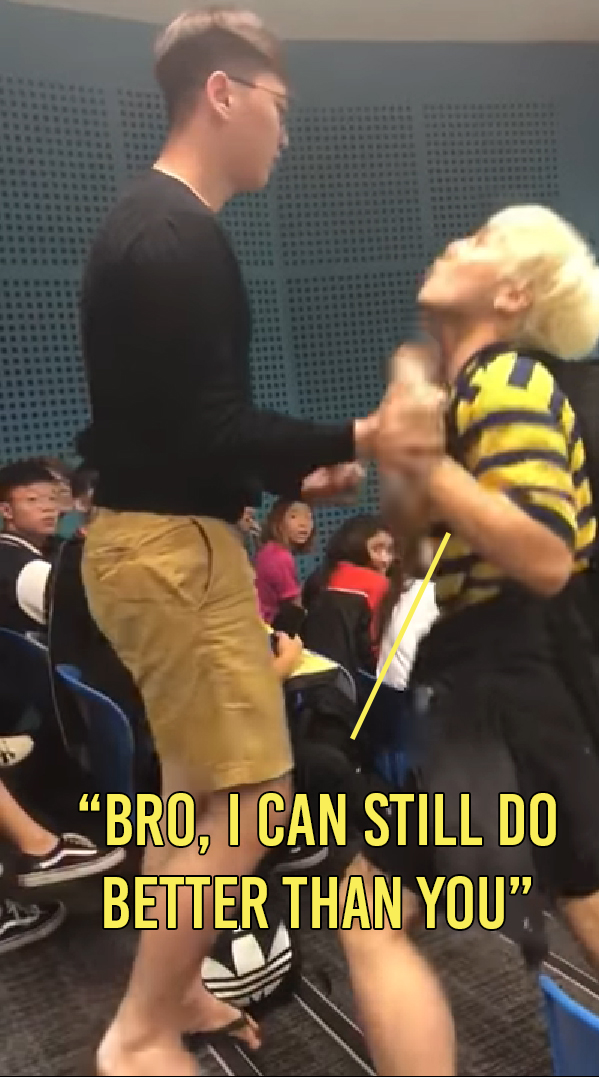 Things got pretty physical when Mr Black Shirt grabbed him by the neck for an extended period of time. 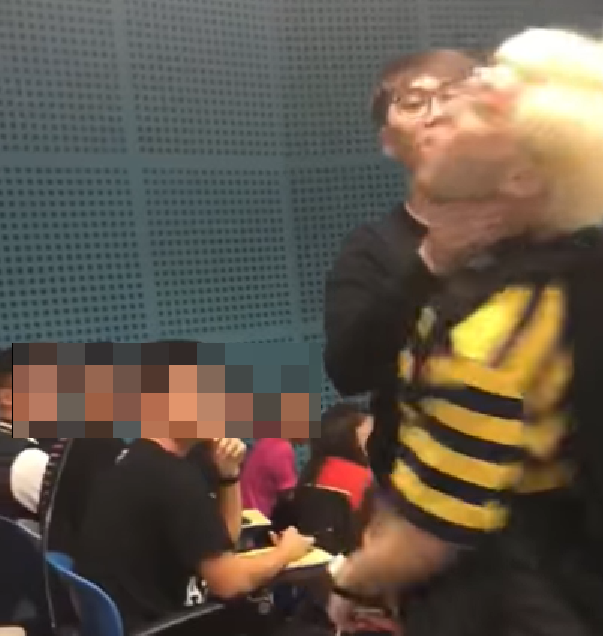 Thankfully, the teachers present broke up the physical attack before the two students could continue the scuffle.

However, Bumblebee’s feud didn’t just end after one person challenged him.

He continued his row with another student dressed in a red singlet, who’s been dubbed Mr Red Shirt by netizens. 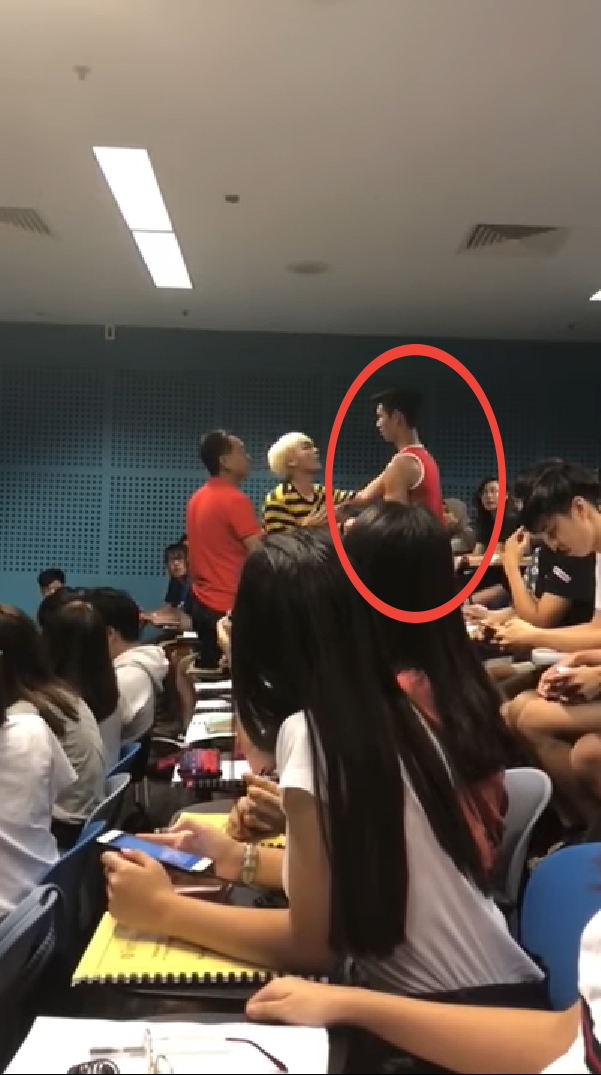 At first, it didn’t seem like Mr Red Shirt wanted to start a fight.

Bumblebee asked Mr Red Shirt for his opinion on being looked down upon, just because he was from ITE. 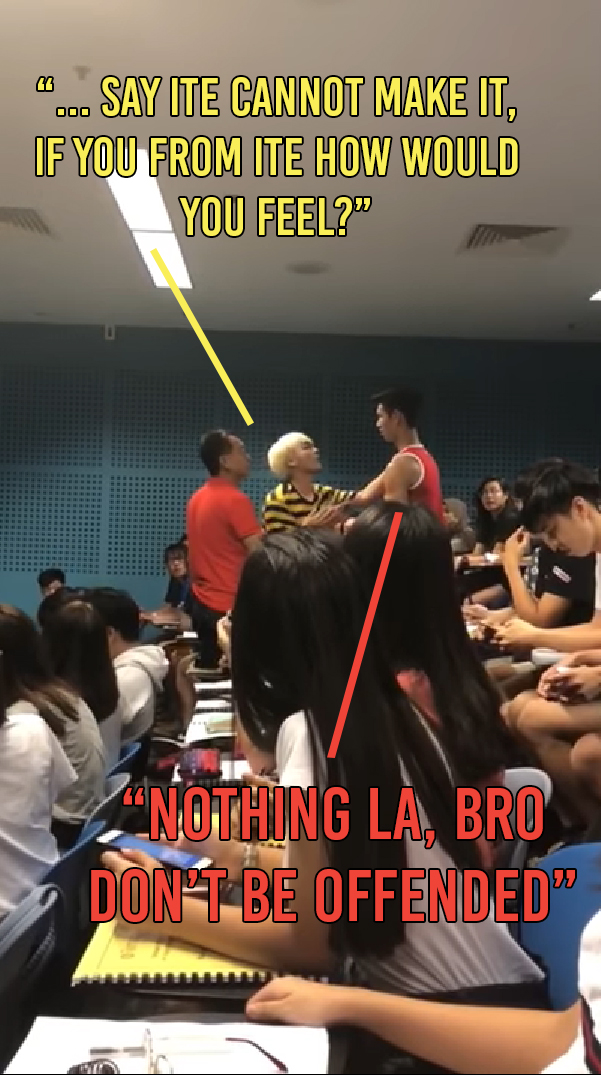 Unfortunately, this comment seemed to trigger Bumblebee even more. Although it sent the students in the lecture theatre into peals of laughter. 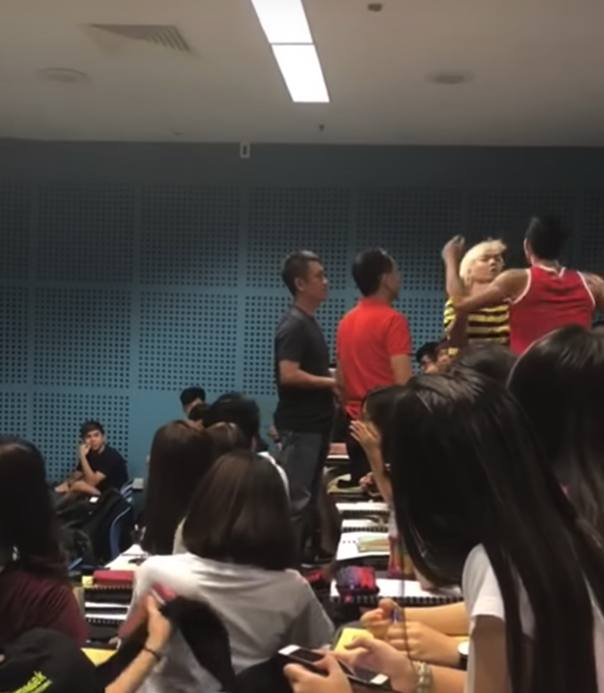 And this is where the situation went back to square one.

Influenced by Bumblebee’s provocations, Mr Red Shirt continued his verbal joust with him.

And soon, in a completely unrelated turn of events, a contest of physical appearance ensued. In the end, Mr Red Shirt made it difficult to decide the winner in their “who looks better” contest. Until this point, the teachers were successful in preventing any students from getting seriously injured. They, however, remained unsuccessful in defusing the drama.

A security officer and a course manager were soon called in to mediate. 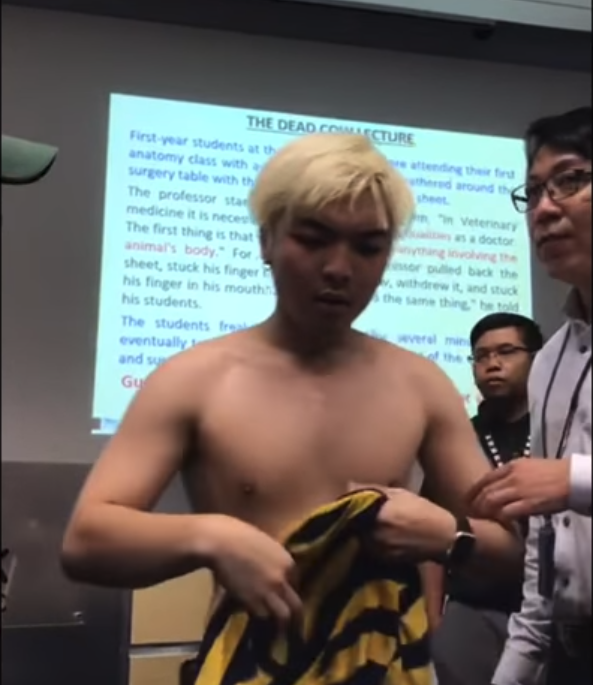 Told to leave the lecture hall, Bumblebee only had this to say to the teacher,

He discriminate me [for being] from ITE, I feel hurt. And this guy strangle(d) me, if he can get away with it, what kind of school is this?

Another teacher then asked if the room was hot, since he removed his T-shirt. He explained,

I know here very hot… Because of me! I am the hot thing here! I’m the biggest thing TP has ever seen!

Judging by how viral this video has gone, he is indeed a hot topic.

Context of the drama, as explained by TP students

According to some comments made by other TP students online, there was a bigger backstory to what triggered the episode.

Turns out, Bumblebee had allegedly been late and interrupting lectures in the days preceding this episode.

His repeated disruption of lectures was not taken well by his peers.

At some point, someone felt that it was necessary to tell him off — which eventually led to the first quarrel.

However, despite Bumblebee’s disruption, we agree that it was inappropriate if other students really did use his educational background as a means to put him down.

After all, they’re all currently in the same school based on their own individual merit.

Hopefully Bumblebee will make it in time to his next lesson without incident.