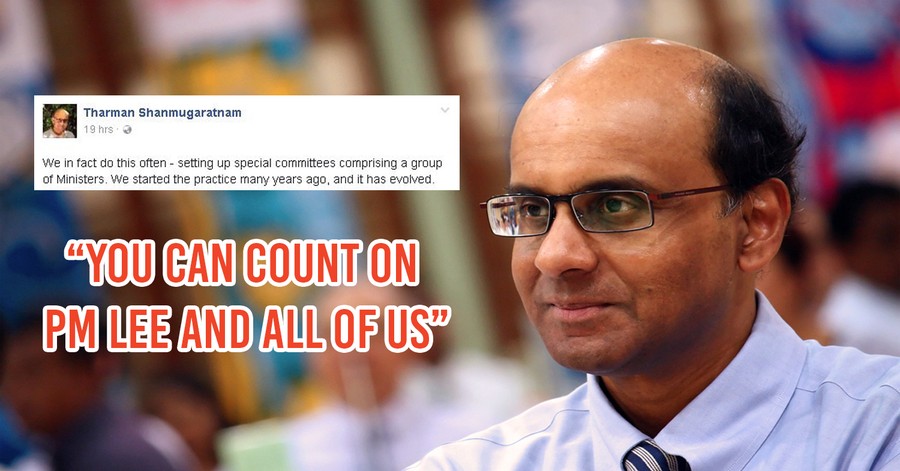 Much has been said about the alleged secretive ministerial committee that was set up over the fate of 38 Oxley Road.

In a Facebook post on Thursday (22 June), DPM Tharman called for Singaporeans to remain calm amidst the storm that is the Lee family dispute.

He echoed DPM Teo’s and Minister Shanmugam’s claims that there was nothing shady about the 38 Oxley Road ministerial committee:

“I have to say there is no mystery as to why a ministerial committee was set up to look into the options for 38 Oxley Road.”

Here’s a summary of the points he raised regarding such committees:

Have Confidence In Our Government

DPM Tharman attributed Singapore’s relative success to the solid foundation that the late Mr Lee Kuan Yew and his team of Ministers had built — the preservation of the rule of law, policy-making that takes into account both the public and private interest and the constant comparison of long and short term effects.

And he assured Singaporeans that PM Lee and his team will uphold the system built by LKY:

“We have a system of governance that Lee Kuan Yew and his team built, and it isn’t going away. You can count on PM Lee Hsien Loong and all of us in his team for that. You can count on the fourth generation leaders to keep to a system that upholds the laws of the land, prioritises the common good and looks to the long term.”

However, it seems like he wasn’t exactly talking about the specific ministerial committee that discussed the fact of 38 Oxley Road, but just the system in general.

Meanwhile, Dr Lee Wei Ling has struck back with a 4-point Facebook post, insisting that the committee was indeed secret, from its makeup, to its final deliverable.

Let us remain calm during this period of uncertainty and await the Parliamentary Sitting on 3 July that might clear the air.