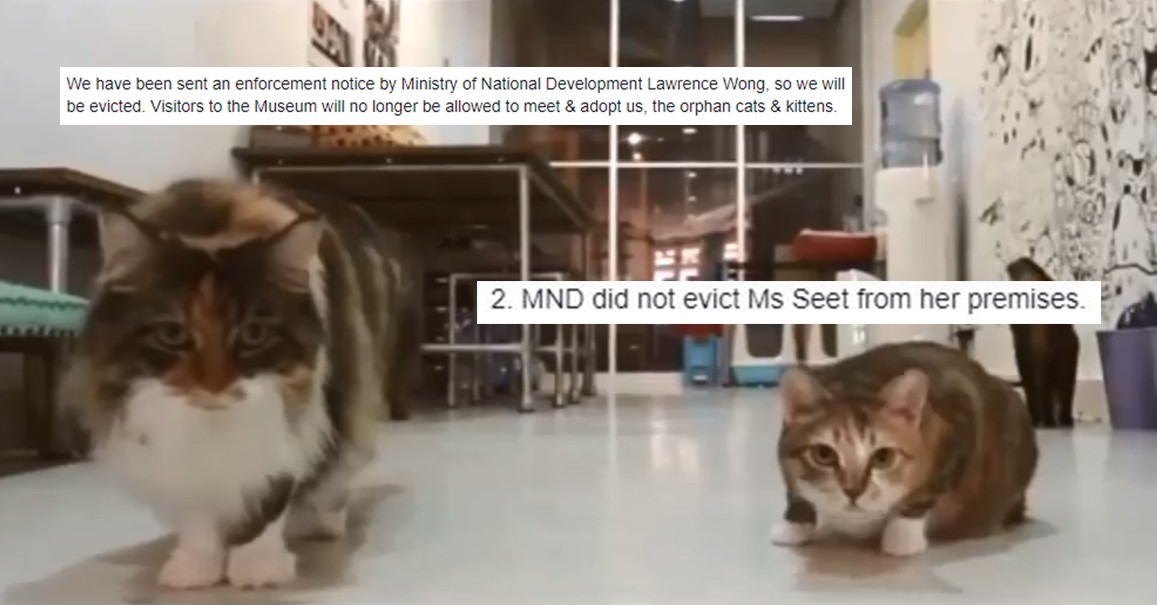 The Cat Museum Found To Have Breached Residential Unit Use

The Cat Museum, located on Purvis Street is being forced to close 2/3 of its operation, and the cats currently housed there will be forced to find new homes. But behind the impending closure of the cat shelter/museum/nursery lies drama involving 2 ministers, an ex-radio deejay, and a bunch of helpless, innocent felines.

What is The Cat Museum? The Cat Museum is a non-profit enterprise that spans 3 upper floors of a shophouse unit. The first floor houses an unrelated restaurant, and the remaining floors are designated for different uses:

And here’s where the problems come in.

In a rather emotionally-charged press release, The Cat Museum specifically name-dropped MND Minister Lawrence Wong, saying that he “rejected the appeal” for visitors to enter Level 2, and meet orphaned cats.

They also mentioned on their ensuing Facebook post that they are being evicted, following the letter sent allegedly by Minister Wong.

Eviction would also mean the closure of the Mama & Munchkins Nursery, a facility that takes in newly orphaned kittens, and nurses them back to health. There is no other such facility in Singapore, and loss of the nursery means losing the only place such kittens have a shot at staying alive.

Strangely enough, they also had to mention that Law Minister K Shanmugam was around at their opening.

But just look at those cats! Why would the government want them to be HOMELESS??

Except this time, it’s not really the government’s fault.

In a Facebook post on Thursday (7 Sept), MND spoke out against some of the allegations thrown around by Ms Seet.

For example, they mentioned that Ms Seet has not been restricted from fostering cats on Levels 3 and 4, and does not affect the way the business is run on Level 2.

So who’s doing the evicting?

Yes, MND aren’t the bad guys here. All they did, was to ensure that commercial activities were not being conducted at a unit licensed for residential use. MND are not the ones chasing The Cat Museum out.

Instead, that honour goes to the landlord of the premises.

Presumably spooked by the letter from MND, the landlord of the premises decided not to extend the lease of The Cat Museum, which will expire in late September.

So, while it’s unfortunate that The Cat Museum has to vacate, to say that they were evicted by MND, or even Minister Wong, is largely inaccurate.

Nowhere in MND’s enforcement notice, uploaded by The Cat Museum themselves, does it mention that Ms Seet has to close down her business.

Welfare of the cats is the most important

But never mind who’s at fault here. Here’s what’s happening: The Cat Museum’s lease for Levels 3 and 4 will run out at the end of September, and Level 2 is far too small to house everything that is currently spread out over 3 floors. So, what’s far more important is that the cats and kittens currently housed at The Cat Museum are well-cared for. To ensure the well-being of the critters, TCM is holding fund-raising weekends for until they have to move out.

Additionally, you can donate to TCM’s Give.asia site, or head on down to adopt the cats yourself!

Featured image via The Cat Museum