Luciano Checco’s series did not acquire permission from subjects

Italian photographer Luciano Checco’s recent photography series “The Other Singapore” was all over the internet yesterday (9 March), featuring a side of Singapore most aren’t familiar with.

The Singapore-based shutterbug trawled the streets of seedy Geylang, capturing images of pimps, prostitutes, and everyone else in between. The photos helped show a side that contrasts sharply with the mental image of our sterile, expensive island.

Perhaps exposing this other side of a squeaky-clean Singapore seemed like a good idea at the time. Except for one tiny detail.

He never sought permission from his subjects to capture their images.

Activist groups up in arms

Vanessa Ho is the coordinator of Project X, an activist group working to remove the stigma against sex workers in Singapore. Turns out she knows the people captured in the series, and found out that Checco did not acquire permission from the women.

And she’s not the only person appalled at Luciano’s lack of respect towards his subjects.

Feminist group AWARE have also weighed in on the issue, suggesting that the photos are decidedly uncool.

To Luciano Checco’s credit, the photos have already been removed from his Facebook page.

However, the photos are still up on camera company Leica’s website, which feature the Italian’s work, along with an interview on his work and inspirations.

One question is particularly insightful: he recalls an instance where three incensed transvestites attacked after hearing his shutter click, leaving him with broken spectacles and a bleeding head.

The photos are still up on Leica’s blog.

Coconuts.sg have already removed the pictures from their post though, and called themselves out. 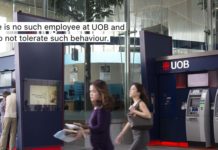