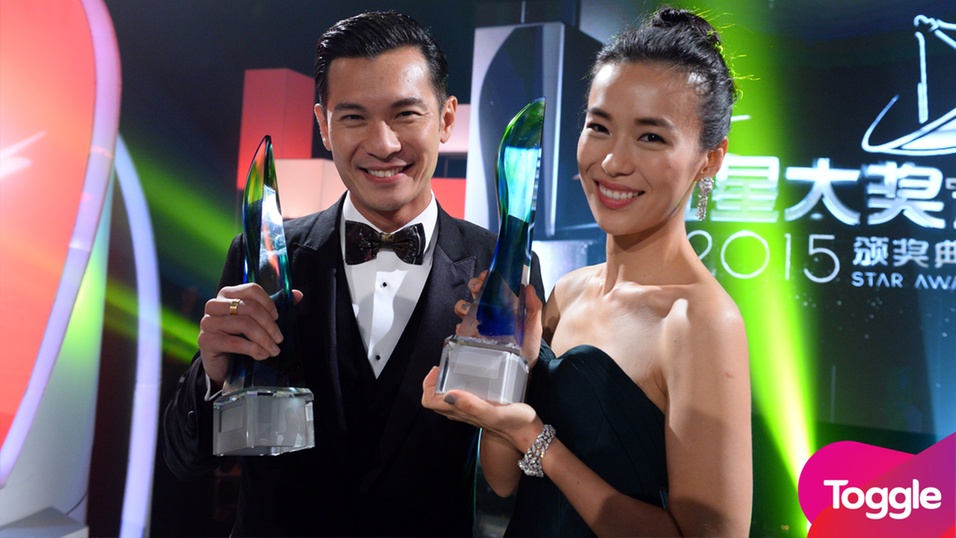 Star Awards is not just about the glitz and glamour

Yesterday (26 April) was an eventful evening for many artistes as they awaited with bated breath for their names to be announced. Some shed tears of joy, some were over the moon, while others left disappointed. This year’s Star Awards was the last to be held at the Caldecott Broadcast Centre, the same venue of the first Star Awards in 1994. MediaCorp will be moving to its new location in Mediapolis.

The Star Awards may be no Oscars, but our local celebrities still have their fair share of red carpet moments. If you’ve missed out on the big show, here’s 10 reasons why you should watch it on Toggle:

We blame it on the bad stage design. With actresses sashaying in their mermaid gowns, no wonder Wood Xuan did a Jennifer Lawrence.

Check out Carrie Wong in red, who lifted her skirt and ran instantaneously, Cinderella-style to offer help to the damsel in distress. 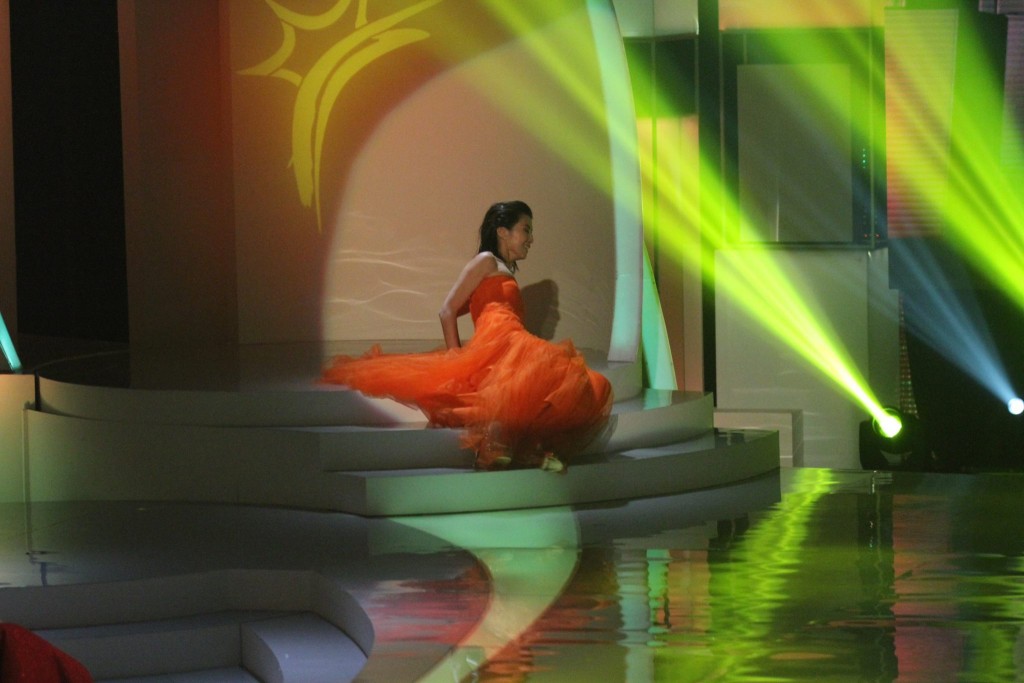 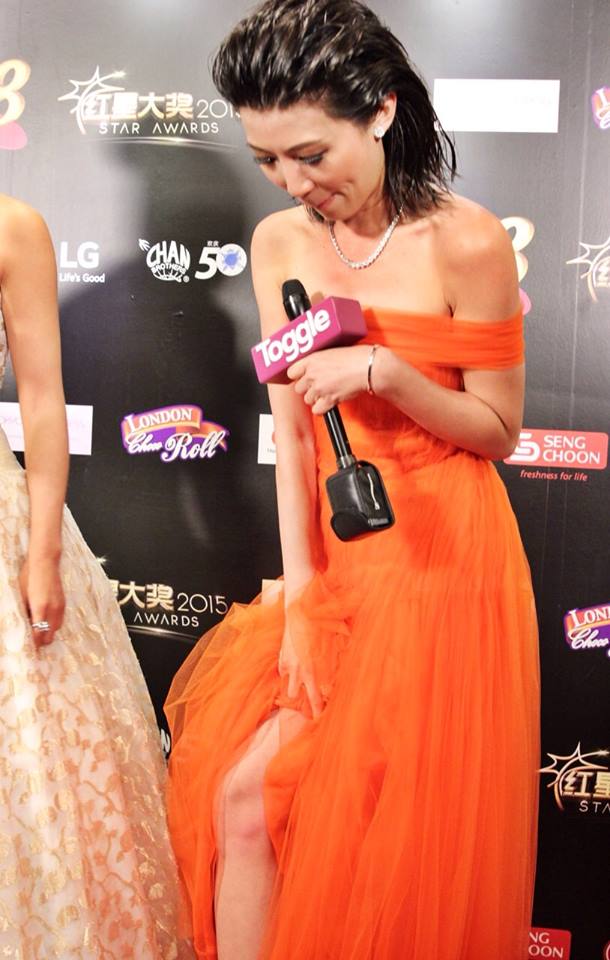 Just last week, at the first show of the annual Star Awards, Rui En drew brickbats for wearing a face “blacker than charcoal”.

This week though, aware of the criticisms made last week, Rui En flashed her elusive smiles more than once.

Here’s what she had to say about her ‘black face’ the week before:

P.S. try not to cringe at the fake laughter.

Ouch – this must hurt more than the fall. 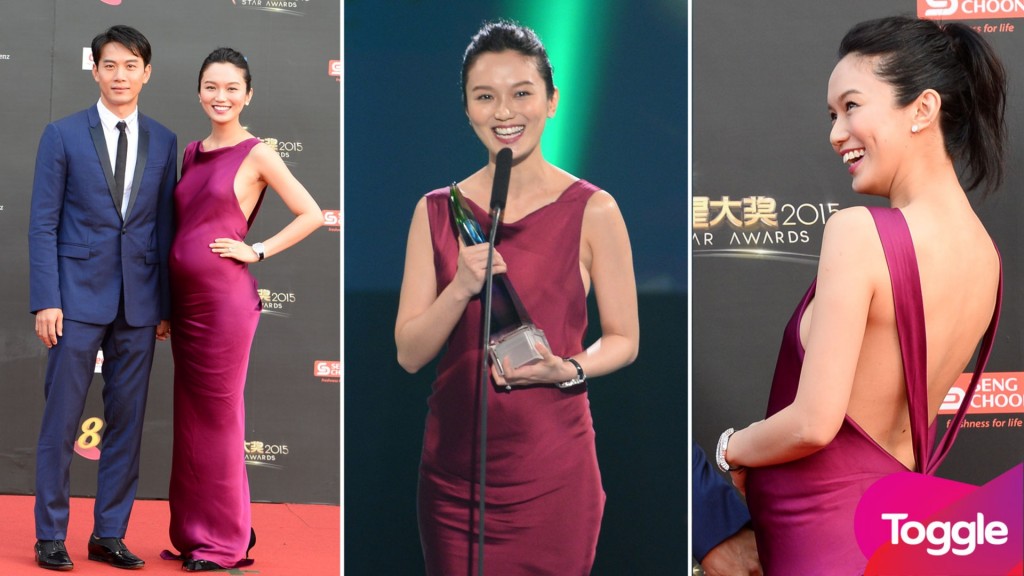 Peh, who is six months pregnant now, has stayed away from the limelight in a while. Probably her first media appearance with a belly, Peh looked radiant and blissful – still every bit the stunner in a red number that shows off a generous amount of sideboob and sexy back. An attentive Qi, worried about his wife, stood by her and guided her on stage. Too bad he didn’t stay with her while she was giving her speech, nor thank her when he clinched his Top 10 Most Popular Male Artistes award.

Busty Taiwanese Yao Yao, who won the title of Best New Artiste in 2013’s Golden Horse Award, was present at the award ceremony and looking pretty in pink.

Even Ian Fang could not help but stare. 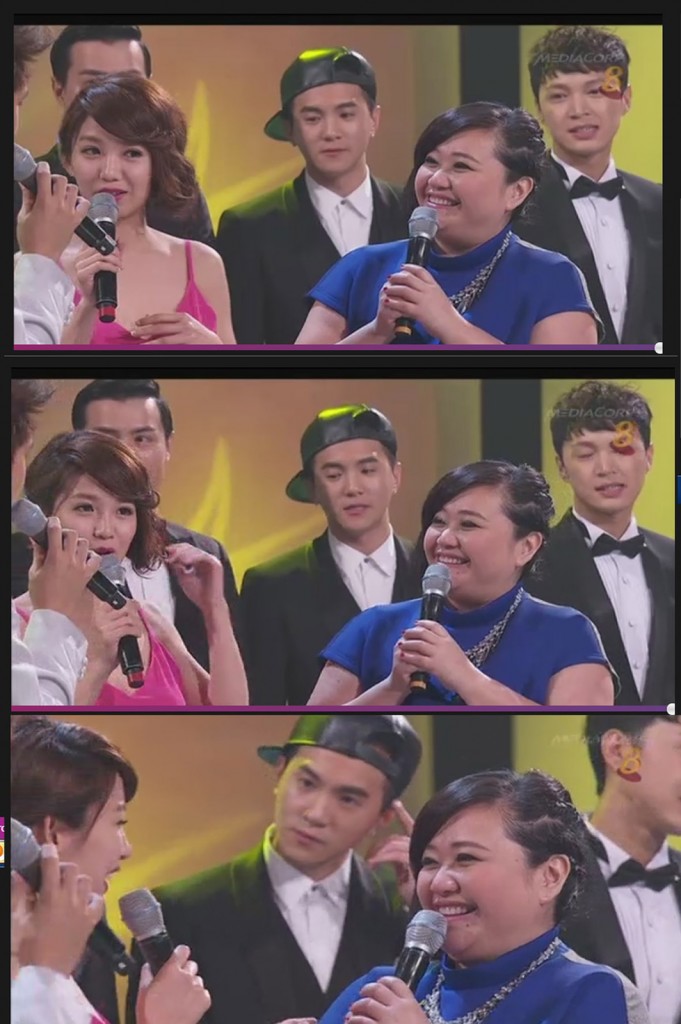 Can we blame him? 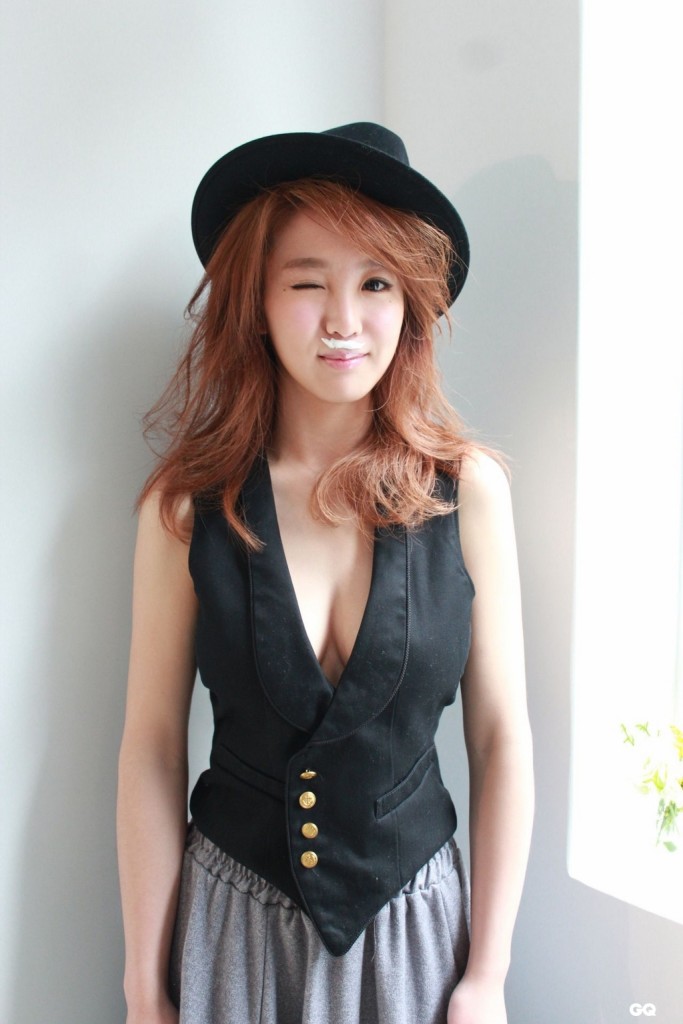 Also present was Cathryn Lee, the ambassador of Tokyo Bust Express, who played the theme song of Channel 8 blockbuster Little Nyonya. If you find her a familiar face, you’ve probably watched her on television in some Singapore-Malaysia co-productions. She was also rumoured to be with TVB actor, Ron Ng. 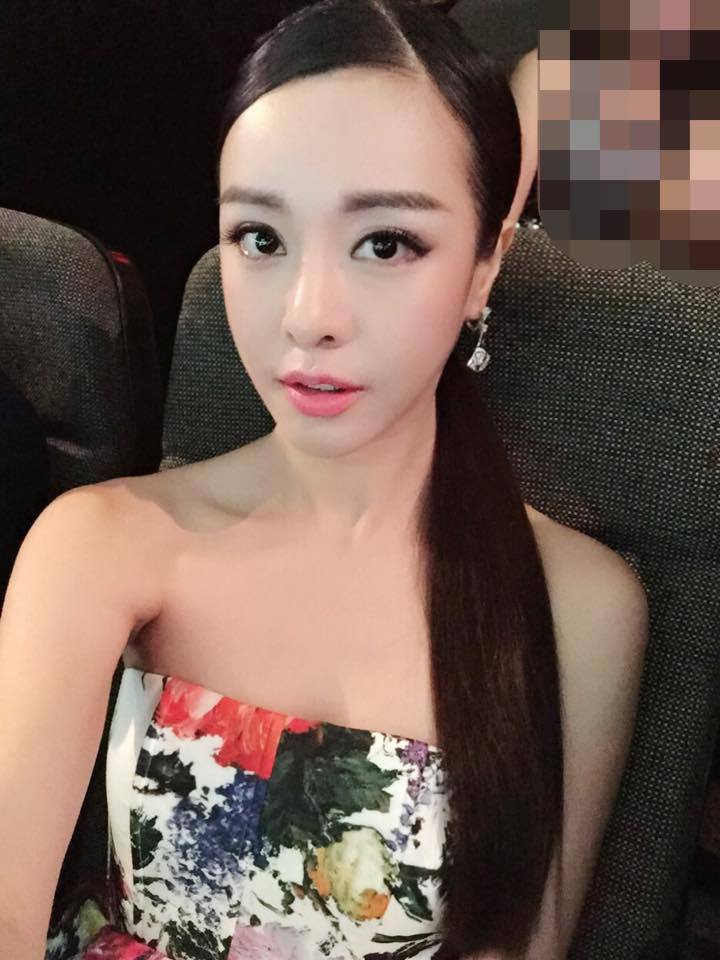 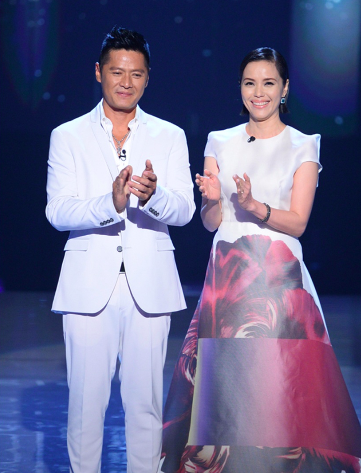 After years of being MIA at the Star Awards, Caldecott’s big brother finally showed up. And that is already reason good enough to watch the awards show.

7. Feel the camaraderie between artistes

His first Best Host award came after five years and an excited Pornsak beckoned his fellow nominated hosts to come on stage to celebrate with him. Instead of feeling sore, Mark Lee, Quan Yifeng, Li Teng and Ben Yeo planted kisses on an unsuspecting Pornsak. The auntie killer, who always hosts programmes with his infectious laughter and sunshine personality, truly deserved this belated win.

Check out how overjoyed Pornsak is:

The first in her 10-year-long career, Rebecca Lim bagged her first Best Actress award in her portrayal as a goofball in drama Yes We Can. Probably too overwhelmed with emotions and shocked at the announcement of her name, Lim’s lips quivered as she struggled to fight back tears. Year after year, Ng stumps audiences with his extra cheem and awkward speech. He even tried to explain his speech once again in the post party, but unfortunately most people will just be going gong simi?! This win marks his ninth award, so only one more cryptic speech to go – thank god! Or is there more to come?

10. Hear a duet by Shaun Chen and Chen Han Wei The two share a close bond, presumably after the filming of The Journey: Tumultuous Times in which Chen Han Wei plays Shaun Chen’s adoptive father. After Chen Han Wei won the Best Supporting Actor award, he invited Shaun up on stage for a duet, singing Chun Tian Li, a song constantly sung in The Journey to symbolise their relationship.

Bonus: Behind the scenes footage Chen Hanwei said he would leave showbiz if his The Journey: Tumultuous Times co-star, Shaun Chen, did not clinch the Best Actor award. Well, thank goodness Shaun actually won then. When Lee’s name was announced for the Top 10 Most Popular Female Artistes, Chew gave Lee a congratulatory smooch on the lips.

What awaits in the next Star Awards?

The Star Awards may be a fierce competition, but it is also a way to celebrate the hard work and effort put in by the artistes in the past year, as well as a community and platform for interaction between celebrities and their fans.

Maybe some of your favourite artistes fell out of favour this year, but there is always a next!

Featured image via Toggle
With reference to Channel NewsAsia