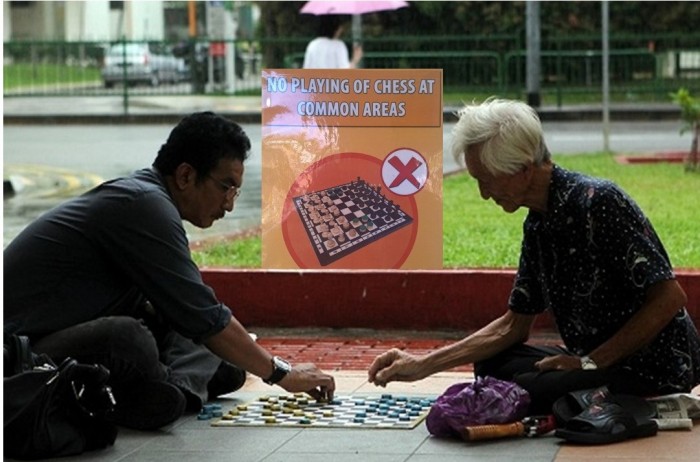 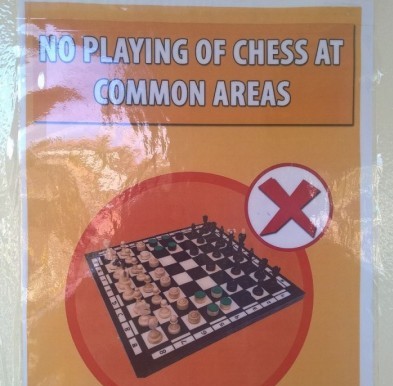 The Marine Parade Town Council has put up this notice some time ago, which alarmed not only chess players in that area but also the Internet. 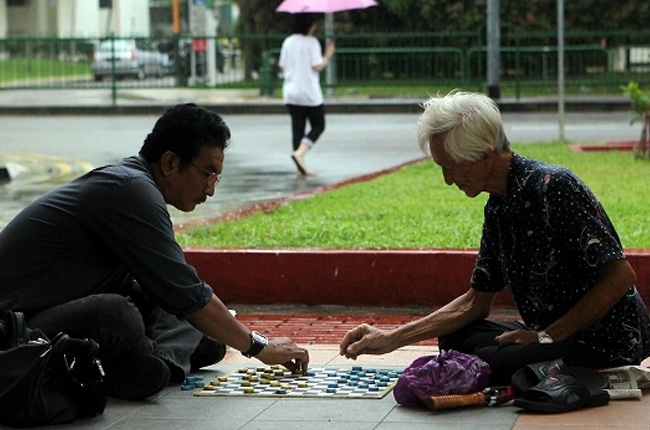 Playing chess in common areas is a ubiquitous scene in most of Singapore’s void decks.

It seems utterly unreasonable for Marine Parade Town Council to ban a cultivated game in nature but they do have their reasons in doing so.

The Straits Times reported today (15 Mar) that the authorities had removed all the posters and replaced them with new ones.

A spokesperson apologised on behalf of the Marine Parade Town Council, saying the message in the poster was a mistake.

She told The Straits Times:

We admit that it’s a mistake by our side. We do not actually ban chess in common areas. We just wanted to deter people from gathering and blocking the way (referring to the sheltered walkway linking Block 11 and Block 12).

This makes complete sense because the walkway between the blocks are narrow and when it rains, the group of chess players pose an obstruction to people who want to use the walkway.

What did not make sense is their poster — which is so easily taken out of context and has so much room for misinterpretation.

Because of their extreme message, the Marine Parade Town Council had to clarify what their poster really meant on Facebook:

Chess players are partially at fault too 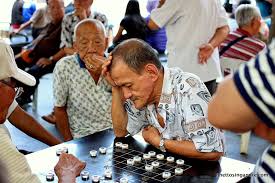 While many are pointing fingers at the Marine Parade Town Council for banning such leisurely activity instead of rectifying the problem, the chess players are also guilty of being inconsiderate.

MP for Marine Parade GRC Fatimah Lateef replied to the issue in a Facebook comment last Sunday (13 Mar). In her comment, she addressed the efforts made by the Marine Parade Town Council:

Over the years we have been putting up multiple action plans, with police, town council, HDB, grassroots patrol etc and yet they remain recalcitrant and downright antagonistic to all our interventions. I have personally gone down many times to talk to them and explained that they are welcome to join us at the nearby CC or the RC or the senior citizens corners in the estate, but not to block the linkway, as many people from the bus stop and main road use this link, but all have fallen on deaf ears.

She wrapped up by saying that their efforts in making the situation more convenient for the rest of the residents did not result in a positive outcome and residents are still disturbed by the noise at night.

“Our intention is not to cause trouble. We just want to have fun.”

Retired Police Investigator Mohd Salleh told The Straits Times that they bear no ill will:

We are all elderly people. We behave ourselves. We don’t commit crime. I’m angry that they treat us as though we are hooligans.

He even said that the police and town council staff have stopped their games and seized their stools and chairs.

Which makes us wonder — besides the Community Center, is there no where else at the void deck for them to play a game of chess? 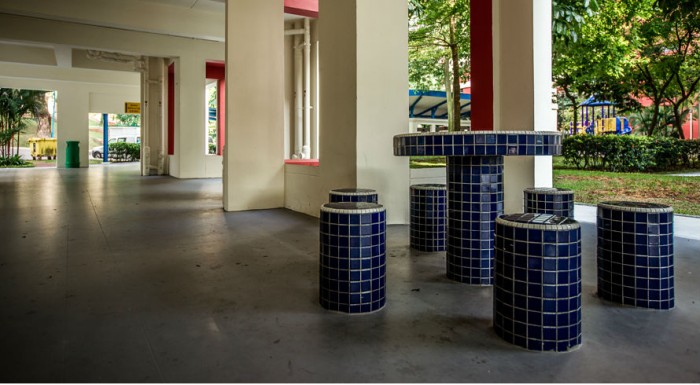 Their intentions might not be malicious but their actions have indeed caused inconvenience to residents living in that area.

A resident of Block 11 told The Straits Times:

It’s occasionally inconvenient. Sometimes there are two or three tables of games and a lot of people gathering around. There is no space for us to move and I have no choice but to get wet in the rain.

On the contrary, some residents feel that there is no harm for this group of elderly to continue their game of chess — which most of us agree with.

However, their game of chess should not be at the expense of residents’ convenience.

After all, the sheltered walkway was not built for them to play chess.

The issue at hand is simple — for chess players to not obstruct the paths of residents and keep their volume down at night.

Yet, this problem has been ongoing for five years despite measures taken by the Marine Parade Town Council.

It is understandable that the Town Council has to eventually resort to such an extreme ban despite how unreasonable many perceive it to be.

The Marine Parade Town Council has replaced their old posters with new ones yesterday (14 Mar), which reflect a more nuanced message in hopes that the chess players will abide by.