Joy to the world. The odious Toa Payoh couple who verbally and physically abused a 76-year-old man in a Toa Payoh hawker centre were found and arrested on Tuesday (April 25) — for being a public nuisance.

While most of Singapore rejoices at the prospect of the couple being behind bars, we should note that the offence of public nuisance they were arrested under only provides for a fine of up $1,000, according to the Singapore statutes — and its wording is quite broad.

And that means that the couple’s arrest is already the 4th one that we know of in this month (April) alone.

The offence of public nuisance is spelt out in Singapore’s Penal Code, an act in the Singapore legal statutes that basically encompasses most the criminal offences you can be arrested for in Singapore.

The Chapter lists out all sorts of offences one can be arrested for, for example dangerous driving, water contamination, sale of adulterated drugs, etc. While the name of Chapter XIV is long and comprehensive, the wording of Section 290 is kinda general.

Yeah, that’s it. Section 290 basically means you can be arrested and fined up to $1,000 for anything deemed a “public nuisance” that they didn’t mention in the previous sections and chapters.

Which also means you can be arrested for displaying any behaviour that people don’t like — behaviour that may have been called to attention by the general public via a viral Internet video.

After all, who decides whether your behaviour is a public nuisance or not? Why, the public of course — at least that’s what it seems to be like.

Is “public nuisance” then just another name for mob justice?

Here are the 4 cases of people arrested for public nuisance that were heavily publicised in the media:

The video that started it all showed the elderly man asking whether he could sit at a hawker centre table already “reserved” with an umbrella by a woman, who verbally abuses him. Then, her male friend barges into the old man from behind, making him lose his balance.

Amid public uproar over the offence, a petition was started to raise funds for the old man to take civil action against the couple. The daughter of the 76-year-old victim also expressed her “outrage” and “disgust” over the whole incident.

According to the Shin Min Daily News, police reports made over the incident prompted the police to make a trip down to the hawker centre on Sunday (April 23) to obtain more information regarding the case.

The 46-year-old man and a 39-year-old woman were apprehended 2 days later after they were by officers from the Tanglin Police Division, reported The Straits Times. Investigations are currently ongoing.

Though the couple’s behaviour was indeed disgraceful, and they should be punished in some way, should they have been arrested under Section 290 for causing a public nuisance?

After all, objectively speaking, their actions really only affected one person — the elderly man.

But the fact that they weren’t arrested under other laws may indicate that the other laws didn’t fit what the couple did, and “public nuisance” was the only one broad enough to be used.

Some might say that those who witnessed the scene were also affected by merely seeing the incident unfold. However, it does seem that the majority of people who took issue with the couple’s actions were on the Internet. Now, that’s where the incident really garnered outrage.

Should public nuisance also be extended to causing nuisance to the Internet public?

Last Thursday (April 20), another old man was making waves on the MRT — this time as the aggressor.

He approached another man on the MRT and apparently asked him for sex. He also physically assaulted the other man, an American who caught the lurid incident on video.

For his troubles, the old man was arrested under Section 290 of the Penal Code for causing a public nuisance.

Why not harassment or assault?

In the 3rd episode of (“Uncles Gone Wild”), a 69-year-old was arrested for causing a public nuisance because he left baking flour in a few areas of Woodleigh MRT station last week (April 18).

The discovery of the white powder caused the MRT station to be shut down for a few hours and the police and Singapore Civil Defence Force (SCDF) to be called in. 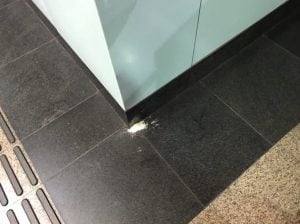 Turns out he was part of a running group called “hashers”, and was leaving a the flour to mark a trail. Read our story on the hashers who shut down an MRT station.

2 other men who were part of the group were also taken in to assist with investigations. The group, the Seletar Hash House Harriers, also issued an apology.

While the public seemed to be divided on whether the uncles deserved to be punished for their actions, especially since they probably didn’t intend to cause any alarm, they did shut down an MRT station and caused inconvenience to the public, not to mention the police and SCDF.

Early this month (April 2), another station on the North-East Line was shut down briefly due to a security incident.

An unattended bag was found in Hougang MRT station, and the police were called — it turned out to only contain household items.

Nevertheless, a 39-year-old man was arrested for causing a public nuisance. Here he is being led away by the police:

Did he deserve it? Well, like the Woodleigh MRT uncles, he shut down an MRT station for more than an hour, and an elderly woman was injured as commuters were evacuated.

It’s still unclear whether he did it intentionally, as he was seen smiling as he was being led away by the police.

Perhaps there should be a specific law that says you can’t leave stuff around in an MRT station.

After all, Singaporeans leave their belongings unattended all the time — for example, to “chope” tables at hawker centres, which brings us nicely back to the Toa Payoh couple.

It seems that the offence of public nuisance may be starting to be used as a “catch-all” crime to arrest people who exhibit behaviour that the majority of people just doesn’t like, even if most of the offended people did not see this behaviour first-hand, but via the Internet.

However, it’s a slippery slope if we start arresting people for actions that people over the Internet find objectionable.

While there are people who deserve to be punished one way or another, we wonder if there will come a day when this offence is used to arrest people who don’t have any intention of causing trouble, but for some reason did something that many people just don’t like.

For example, a stressed office worker who has just been chewed out by his boss loses his temper and starts shouting at a hawker who put cockles in his char kway teow despite being told not to.

Or a frazzled mother with 3 kids in tow yells at a bus driver because he doesn’t allow her to bring her open stroller up the bus.

How about a mentally disabled person who got spooked by noisy youngsters and starts shouting at imaginary people in Toa Payoh Central?

Or a kid who throws a tantrum in a store and starts whining and stomping on the ground because his mother refuses to buy him a toy?

Should videos of any of these people make it onto the Internet, they may provoke revulsion among netizens.

But should any of them be arrested for public nuisance?

Will Singapore end up being a place where the court of public opinion rules over actual laws?

We’re really glad to hear that the obnoxious Toa Payoh couple has gotten some sort of punishment for their actions, but perhaps we should also think about how and why they were arrested.

And for those who don’t think that’s an issue at all, we hope that you never have a bad day caught on video, or you might become a “public nuisance” yourself.