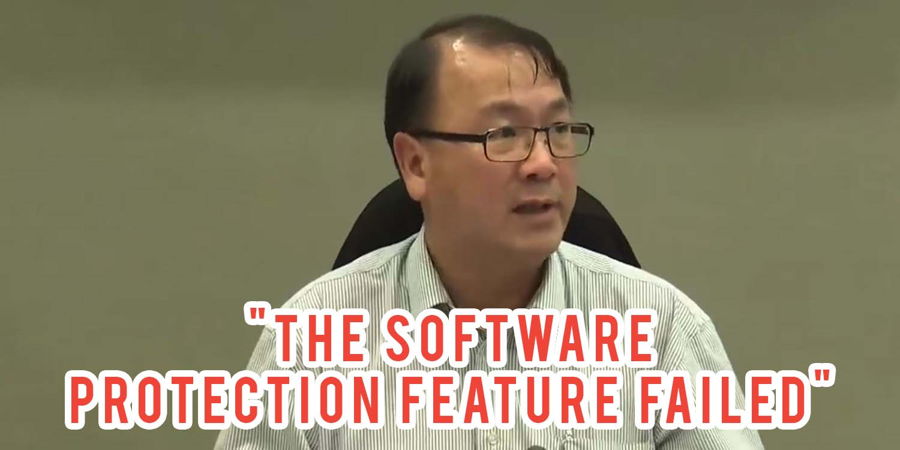 Just when you thought that SMRT’s problems couldn’t get any worse, the train service provider endured its second case of collision in the company’s 30-year history. On the morning of 15 Nov, two trains came into contact with each other at Joo Koon station on the East-West Line (EWL). The incident left 29 injured.

In a press conference on 15 Nov, SMRT bigwigs sought to explain the cause of the incident to the public.

The collision occurred after a second train, which had stopped 10.7m behind the first train at Joo Koon station, moved forward unexpectedly. With the public calling for an explanation, transport bigwigs held a press conference to reveal the cause of the accident.

The first to speak was Mr Chua Chong Kheng, Deputy Chief Executive for Infrastructure and Development at the Land Transport Authority. Sharing the preliminary findings, Mr Chua said that passengers were asked to exit the first train after operators discovered “an anomaly in the [train’s] signaling system”.

The first train had departed Ulu Pandan depot with a software protection feature. However, this safety feature was “inadvertently removed when the first train passed by a faulty signalling circuit.”

As a result, the second train misjudged the distance between the two trains and collided before the first train had moved off.

The software protection feature is a part of the new Thales system. As such, its removal resulted in the aforementioned glitch.

Most passengers have been discharged from hospital

Quizzed about the 29 passengers injured because of the accident, Mr Alvin Kek, Senior Vice President of Rail Operations (NSEWL) for SMRT Trains shared that “care teams were deployed on scene from the beginning to assist passengers who sustained injuries.”

He added that SMRT Chairman Seah Moon Ming and Desmond Kuek had visited the injured passengers at National University Hospital and Ng Teng Fong Hospital. Mr Kek shared that of the 29 passengers that were injured, only 3 required hospitalization.

Mr Kek also shared that passengers who did not seek treatment immediately after the collision could still submit their outpatient claims to SMRT. The train service provider would verify the passenger’s travel history before proceeding with the payment of the claim.

According to TODAY, SMRT set up a compensation hotline a day after the incident, and has already received more than 150 claims. These claims cover both medical expenses and damaged items.

While the press conference shed light on the crash, the man that most people want to hear from is our favourite Transport Minister Khaw Boon Wan.

Speaking to reporters, Mr Khaw shared that he had advised SMRT to suspend the Tuas-West Extension on 16 Nov the the transport authorities to conduct a thorough assessment to ensure that passengers will be safe once it reopens on 17 Nov.

Mr Khaw issued an apology, remarking that it was an “awful day” since “commuters were inconvenienced and some even injured”.

However, the quote of the day must definitely come from Mr Khaw’s attempt to empathise with the public.

The Transport Minister shared that he was “equally upset as they [are]”.

Was the train collision avoidable?

While we are glad that there were no serious injuries by the passengers. However we also can’t help but wonder why the emergency brakes weren’t used. After all, its function is surely to prevent incidents like these.