Must Share News
Home News This Train Delay On The North-East Line Is Literally Due To Human... 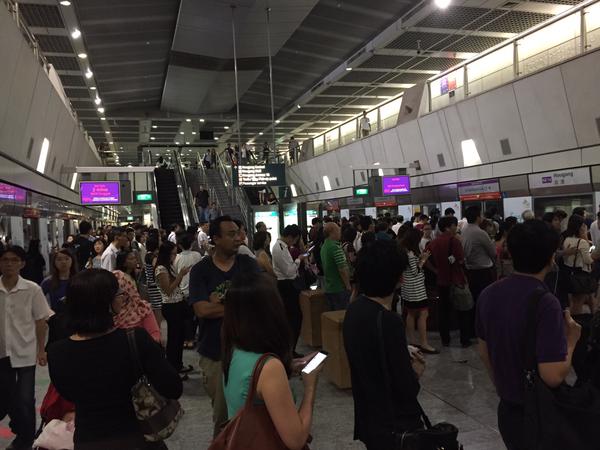 [UPDATE MARCH 12, 11:24 am]: The 19-year-old student from Nanyang Junior College had her kneecap pulled out of position due to the fall.

Girl gets leg stuck in MRT gap. We’re not pulling your leg.

Yet another train delay occurred in Singapore’s MRT system today, but this time the cause was human in nature — literally.

Pictures of a uniform-clad youth with her leg caught between a train gap and the platform in Hougang MRT station made the rounds on social media this morning (11 March). According to an SBS Transit spokesperson, she was rescued within minutes by members of the public, and sent to hospital for treatment.

She has no lasting wounds except for a few bruises on her leg.

Apparently, her foot ended up stuck in the 10 cm gap because she slipped, but North-East Line (NEL) commuters were understandably displeased at the train delays which resulted, after the recent spate of train breakdowns.

Serious delay in #NEL. Huge crowd at Hougang MRT station at 8.30am. Decided to take bus to another MRT line.

Some even hashtagged #SMRT when the line is run by SBS Transit. An easy mistake to make, given every line other than the NEL is run by SMRT.

And then, the counter-tweets about the people who tagged #smrt in their posts.

This person tagged hg mrt with smrt when nel is sbs..

Others who knew about the incident pointed out that in other countries the commuters get together to push the train in such situations, although the feasibility of doing the same for an underground train service with a barrier is, well, zero.

She was still saved by members of the public, albeit with a less dramatic method.

The gap between trains and platforms is 10 cm wide to prevent the train from hitting the edge of the platform — which is a more scary experience for train passengers due to the impact.

Therefore, passengers are reminded to “Please Mind The Gap”. Apparently, the gap is the stuff of people’s nightmares and getting their limbs trapped in them is on the minds of passengers every time they take the train.

However, the phobia rarely, if ever, manifests as an actual experience.

Because people online were all at the scene and clearly saw what happened. In case you didn’t notice, the previous line is sarcasm.

And of course, the usual judging comments.

Some others couldn’t be bothered about the cause of delays as long as they can find another reason to blame public transport operators for their incompetence.

Thankfully, several other comments came out to defend the girl and scolded the others for making assumptions and being mean to her.

Really though, please mind the gap

We mean it. It’s for your own safety.

Featured image via Buddhi Chandana
With references from Channel NewsAsia, The Straits Times