Must Share News – Independent News For Singaporeans
Home Lifestyle “Transit” Is The MRT Photography Series You Never Knew You Needed To... 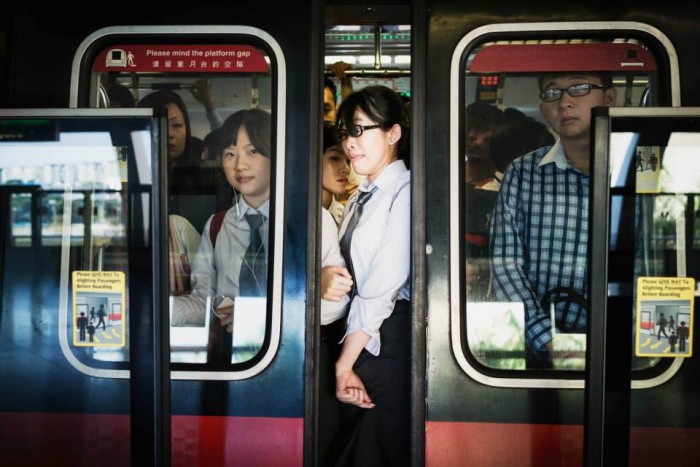 Transit is a project started by photographer Edwin Koo.

The project was born after Edwin felt frustrated and alienated at not being able to get into the train in 2011, after spending two years away in Nepal. He was surprised at how crowded Singapore had become, and took pictures of commuters who were forced into the edge of train doors to highlight the issues.

After feeling intrigued at the faces of the people he took photos of, he started to study other train works and thought of how to insert his own narrative into the pictures. Edwin continued to take pictures of train doors and eventually made a book named Transit, which can be bought here at $25. It will be released on 7 April.

The main aim of the book is to capture “the everyday theatre that happens in front of train doors”.

There’s a Facebook page for the book, and we’ve taken some pictures from there.

More pictures can be found here and here.

The art of sardine packing

Some of these pictures are really illuminating. In the midst of jostling for space on the train, what are we thinking or feeling?

I for one, cannot stand to take public transport during peak hours and avoid doing so as much as possible. For the ones who have no choice, looking at the pictures will remind everyone of their own emotions of being a packed sardine.

More than photographs, these are portraits of actual, ordinary Singaporeans – candid and uncensored. You can form your own narrative from observing the photos. What could they have been feeling at that very moment?

As commuters today, we distract ourselves endlessly with our smartphones or iPads, to anaesthetise ourselves from the unnatural and uncomfortable experience of transit. We create private spaces for ourselves in the most public of spaces.

As commuters, we observe an unspoken rule not to stare at each other’s misery.

As a photographer, I broke that last rule twice over – I recorded the stare, and continue to be amazed by what the stare reveals.

To me, this book represents what it is truly like to be trapped right next to the door on the train — holding on for dear life in a compact space, hoping none of your clothes/belongings/limbs will get stuck between the train doors, having to squeeze into a throng of people, making way for others who were lucky (or unlucky?) enough to find a space in the middle of the train.

And of course, we get to smile and laugh at the myriad of emotions and expressions as a guy takes pictures of them.

Experiencing the “everyday theatre” is one thing, but the pictures tell a completely different story — from the other side of the train doors.

Will the series simply turn out to another case of Luciano Checco and the unwilling subjects? Who knows?