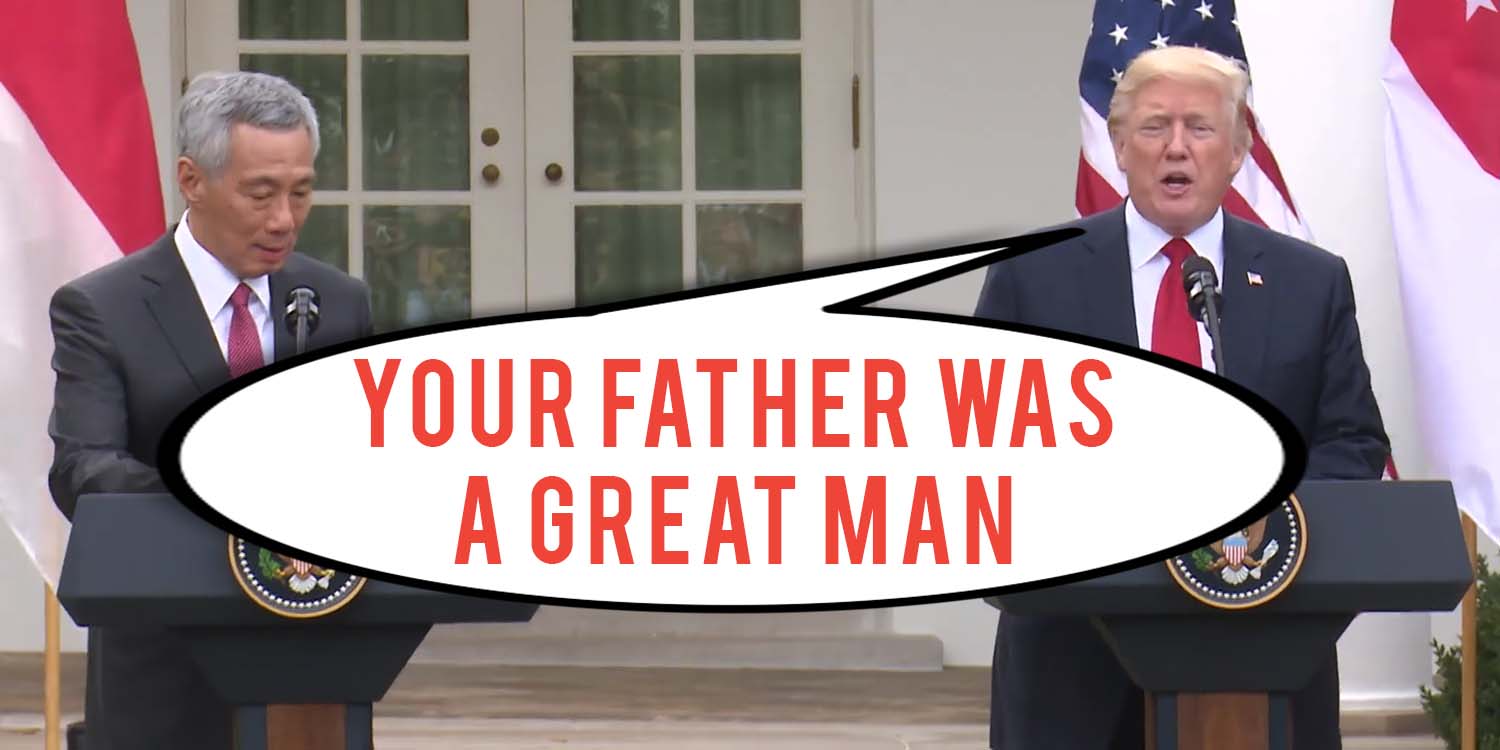 When PM Lee announced that he would be visiting the White House for the first time since Donald Trump became President, we were quite wary of what could transpire during the trip. After all, the last time the two met at the G-20 conference in Hamburg, PM Lee engaged in a weird handshake with President Trump and the latter’s media mistook PM Lee for Indonesian President Widodo.

It seems like old habits die hard, as PM Lee repeated the weird handshake, and President Trump’s media addressed our PM as Prime Minister Loong in a Facebook post that has now been amended. 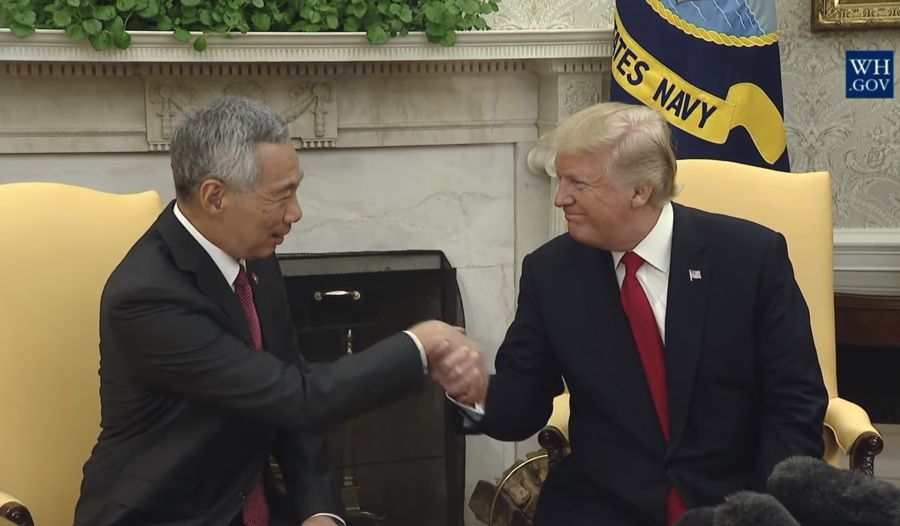 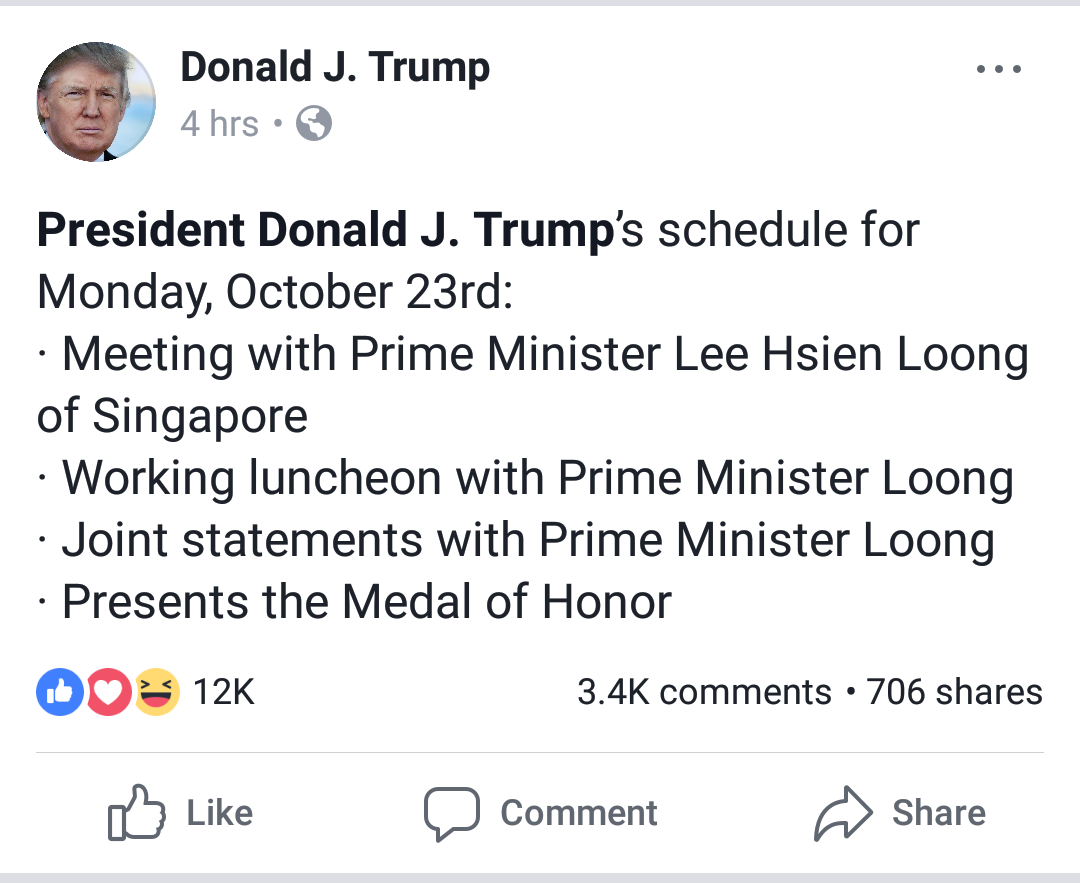 Luckily, President Trump realised the erroneous address in time for their joint appearance at the White House on 23 Oct. Apart from just correctly addressing PM Lee as “Prime Minister Lee”, The Donald also said some very complimentary things about Lee Kuan Yew at his joint press conference with PM Lee.

Here are some key points made by the two politicians.

TL,DR of joint press conference at the White House

As host, President Trump gave the opening address and he shared how impressed he was at our transition from poor island nation to an important economic power. The President also reserved special praise for the late Mr Lee Kuan Yew.

“Singapore’s rapid development from poor island nation to an economic powerhouse under the leadership of the Prime Minister’s great father. He was a great man, he really was a great man.”

As if saying great three times was insufficient in showing President Trump’s adoration, the US president added that Mr Lee was also astute in recognizing that society is just as important as the economy.

It certainly was nice to hear President Trump heap praise on our first Prime Minister.

2. Singapore far-sighted in the battle with ISIS

Another point that impressed President Trump, was how quickly Singapore joined the fight against ISIS.

“Singapore was the first Southeast Asian nation to join the coalition to defeat ISIS. That was very far thinking. You were there before most.”

PM Lee later added that he would be extending Singapore’s support in the fight against ISIS for an additional year.

“Singapore will extend our existing deployment to the operation into 2018, for an additional year.”

With Trump claiming to have made more progress against ISIS as compared to his predecessors, it’s hard not understand why he was so pleased.

While both politicians discussed about the strong bilateral relationship between US and Singapore, President Trump admitted that the US had much to be grateful for. This comes after the US endured a tumultuous month in August 2017, where Americans had to endure Hurricane Harvey and the collision of Naval destroyer USS John S McCain.

In both catastrophes, Singapore was quick to provide aid and support to the US. This drew commendation from President Trump who shared that PM Lee took the initiative to offer help.

“The Prime Minister… called me and made that request himself. It was of great help and we want to thank you very much.”

“When the American Navy destroyer the USS John S McCain suffered a collision at the sea, Singapore came to our immediate assistance. On behalf of all Americans I want to thank the Prime Minister and the people of Singapore for their support, which has been tremendous. And for their friendship.”

President Trump added that the US was “fortunate to have such a wonderful and loyal partner”.

39 Boeing planes for US$13.8 billion and 70,000 jobs created for Americans. That was the trade agreement between Singapore International Airlines and Boeing which PM Lee described as win-win for both parties.

“Win-win for both sides. It will further modernize SIA’s fleet and it will also support many American jobs.”

After injecting US$13.8 billion into the US economy, PM Lee revealed that Singapore was the 2nd largest Asian investor in America. He also added that Singapore imported a colossal sum of US$43 billion goods and services from America in 2016. If you are wondering what did we spend on, here’s some of the products according to PM Lee:

“iPhones, pharmaceutical products, tyres, golf clubs, financial and consultancy services. I mean the sticks and not the associations. And I discovered recently looking at my sports shoes, at my New Balance shoes, which are very good, are made in the US.”

A political dialogue with a Western superpower would not be complete without discussion the huge  missiles in North Korea. PM Lee said that President Trump was pleased with Singapore’s plans to dissuade the DPRK from testing its missiles in the region. However, he admitted that:

“There is no quick and easy solution. Pressure is necessary but so is dialogue.”

PM Lee emphasized that the relationship between US and China is arguably the most important one in the world. China is America’s 2nd largest importer of agricultural produce at the moment, and if PM Lee’s prediction comes true, they will become a bigger importer of American beef.

“They buy soy beans, grains, and cotton as well as farming machinery and I am quite sure as their income goes up, they will buy more and more good American beef.”

Seems odd that PM Lee would speak about China’s imports.

It is a move that will make most Singaporeans cringe but PM Lee has invited President Trump to visit Singapore as soon as possible. The inventor of the word “covfefe” might soon be roaming the streets of Singapore with his beach blonde hair tussling in the wind.

“Although the President is not visiting Singapore this time round, I have invited him to visit Singapore at the earliest opportunity. And I am very glad that he has accepted.”

Now we at MustShareNews have a vested interest in the safety our readers so heed this advice: hide your kids.

With Singapore needing to rely on diplomacy to ensure its peace and prosperity, it is inevitable that have to play house with one of the most unlikable US President.

In a move that was almost as far-sighted as Singapore’s battle with ISIS, we at MustShareNews have already prepared a welcome video for President Trump on why Singapore is such a great country.