Singapore has seen massive infernos before, but the latest one in Tuas seems like the worst yet.

The fire at 23 Tuas View Circuit that started on Thursday (Feb 23) morning has caused roads to be closed and bus services to be halted, eyewitnesses told The Straits Times.

The Singapore Civil Defence Force (SCDF) has said it involves chemical waste and flammable materials — which means it could he very hard to put out, and even after it’s extinguished toxic fumes will hang in the air for awhile.

As a video tells a million words (we just came up with that), here are some videos compiled from the Internet so you can see the full scale of the devastation:

This video from Twitter shows the fire developing amid the buildings of the Tuas industrial estate:

This video from the Shin Min Daily News show the sky filled with fire and smoke, and looks like something straight out of a Hollywood movie on apocalyptic disasters:

Another video from the Shin Min Daily News shows a seemingly insurmountable tower of flames, making the place look like the depths of hell:

These videos from Channel NewsAsia shows the scale of the fire, which can even be seen clearly from afar. You can see the leaping flames and the explosions taking place within:

These videos from The Straits Times show how huge the smoke plume is:

This Channel NewsAsia video is a view that’s a bit too close for comfort:

Another video from Channel NewsAsia shows that the fire isn’t just limited to the facility, but the surrounding area has been affected too, turning into a war zone or a scene from Resident Evil. See the charred trees and the blackened, twisted railings by the side of the road. There’s even a fire in the canal:

The Straits Times’ Facebook page also had some photos of the aftermath, including melted road signs: 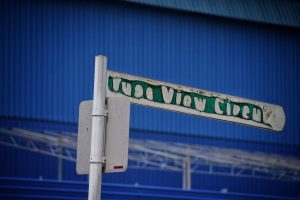 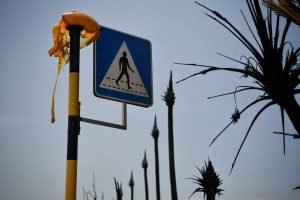 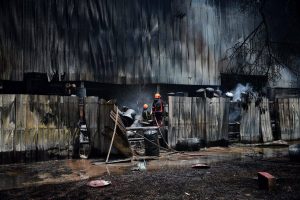 Here’s what the SCDF had to say about the fire:

We are glad nobody was seriously injured in this fire, including the brave firefighters at the scene.

For the sake of all those living nearby, we also hope the fire will be put out soon and the after-effects will be minimal.

For everyone else, please stay away from the Tuas area until it’s declared safe.